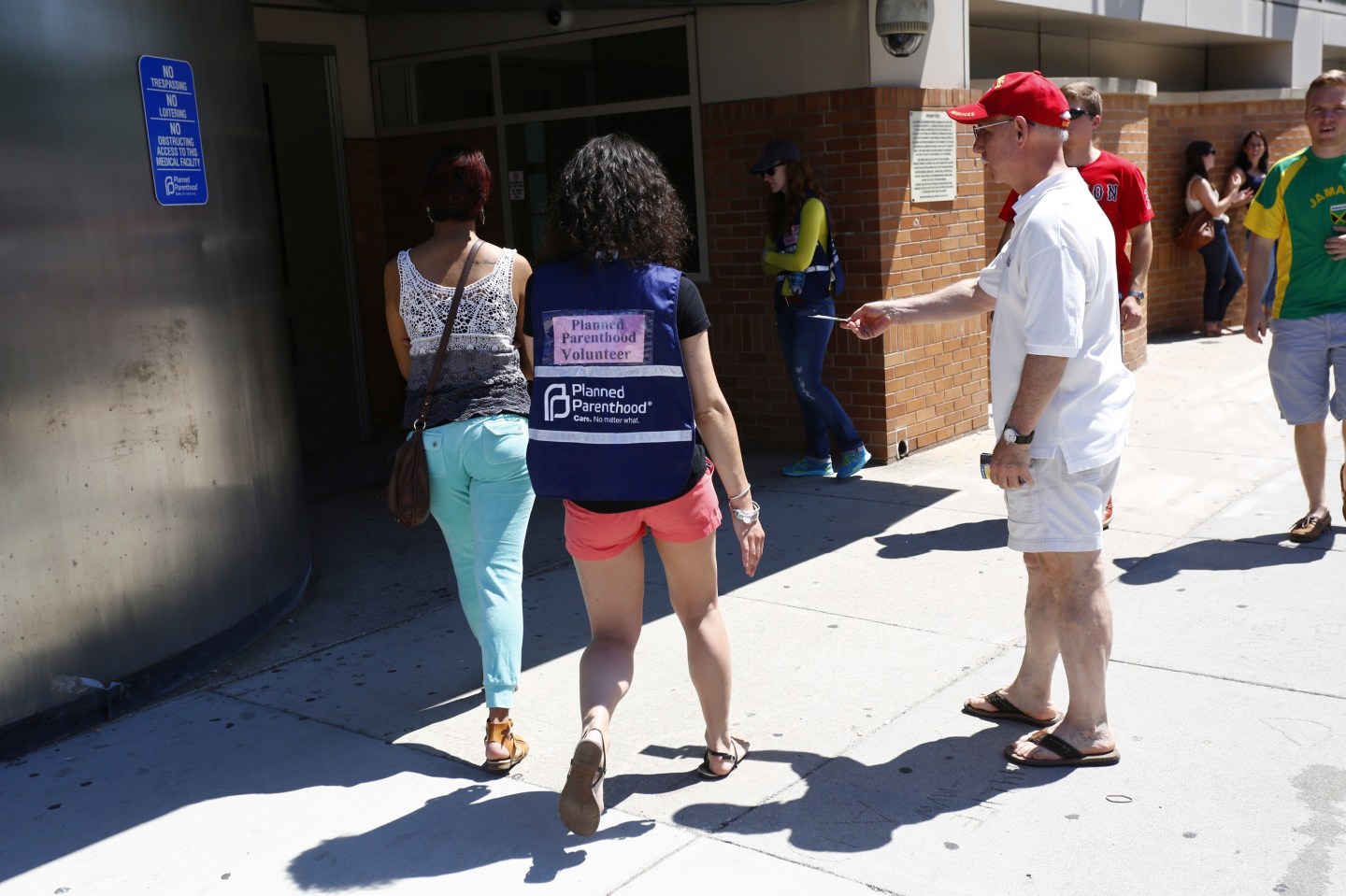 An abortion protester offers a pamphlet to a woman being escorted by a volunteer in front of a Planned Parenthood clinic in Boston, Massachusetts, June 28, 2014. Massachusetts is beefing up security around abortion clinics and scrambling for a legal fix after the U.S. Supreme Court voided the state's buffer zone law that kept protesters 35 feet away, saying it violated freedom of speech. Boston, Worcester and Springfield, the state's largest cities, have deployed extra police to clinics, and abortion-provider Planned Parenthood said it was training new "patient escorts" to help women through protests if needed. REUTERS/Dominick Reuter (UNITED STATES - Tags: CRIME LAW POLITICS HEALTH RELIGION) - RTR3W6WP
Dominick Reuter — Reuters

Some anti-abortion groups are sending women targeted advertisements on mobile phones in real-time when the women enter a Planned Parenthood clinic, relying on a commonly available location feature that ad industry networks provide.

A Boston-based mobile marketing agency, Copley Advertising, has attracted several anti-abortion groups as clients for the location-based abortion clinic ad targeting service, Rewire, a nonprofit women’s rights news site, reported this week. The ads urge pregnant women to “be informed” and “get the facts first” while linking to antiabortion groups’ web sites. Copley said one client had already reached 800,000 18-to-24-year-old women and 2,000 had had clicked the ad to reach the client’s web site, Rewire reported.

John Flynn, CEO of Copley Advertising, did not immediately respond to a request for comment. In a brief interview last year, Flynn said his ad service could target people beyond Planned Parenthood clinics to also include those inside other abortion facilities and methadone clinics.

Planned Parenthood said it would seek to protect patients. “We do not disclose specific security measures; however, I can say that we are continually evaluating and upgrading our protocols around patient safety and privacy,” Dawn Laguens, executive vice president, said in a statement. “Let me be clear: we will pursue every avenue available to protect our patients from targeted harassment and stigmatization. We are committed to protecting our patients and will take all claims extremely seriously.”

Privacy advocates have been warning for years about the risks posed by advertising networks’ widespread tracking of smartphone locations. Opting out of location-based ad tracking can be extremely complicated, as many mobile apps bury permission to collect location information and share it—typically in an anonymized fashion—with third party ad networks.

Smartphone users could also turn off their GPS location and tracking completely in their phone’s settings if they are visiting a sensitive place such as a Planned Parenthood clinic.

The anti-abortion targeting effort relies on a feature of ad networks known as geofencing. Typically, geofencing has been used by retail stores to identify that a customer who installed their app has entered one of their physical locations. That allows the retailer to send a targeted message (“50% off Oreos in Aisle 3”) to the customer just at the time when they are poised to make a purchase.

The Federal Trade Commission last year cracked down on the use of undisclosed consumer smartphone tracking in stores, but the agency’s solution—that stores disclose the practice in lengthy and rarely read privacy policies—seems unlikely to provide much protection. The FTC’s authority doesn’t extend to nonprofit political groups.