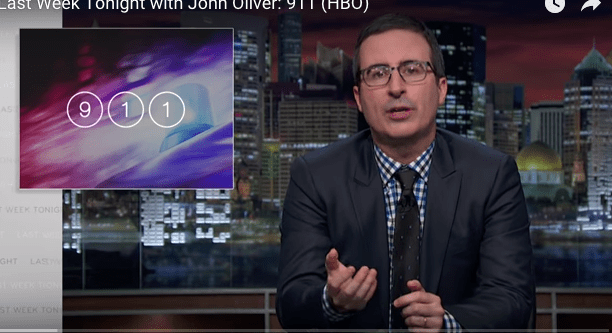 On Sunday, John Oliver crunched the numbers concerning 911 calls to lay bare a troubling calculus of emergency response. “The system breaks down more than you think,” the host of HBO’s Last Week Tonight said. “And when it does, people can die as a result.”

Before breaking down the issue into TV-friendly chunks with his characteristically coruscating wit, the comedian rattles off some statistics: Americans make 240 million calls to 911 each year. But a recent USA Today report said 911’s chances of getting a quick fix on a distress call’s location can range as low as 10%. And according to a 2014 Federal Communications Commission study, location accuracy improvements could save over 10,000 lives annually.

“Which seems like a worthwhile goal,” Oliver said. “People calling 911 are on a very short list of things we expect to be found 100% of the time. It’s that, the clitoris and Nemo. He’s not a bad fish; he’s just curious and more capable than you think!”

The problem with cellphones

Oliver underscored how certain smartphone innovations puncture the myth that 911 lacks the technology to pinpoint callers’ whereabouts. “Even the Domino’s app can tell you where you are,” the performer said. “And they’ve barely mastered the technology to make a palatable pizza!”

Although Oliver granted there’s no simple explanation as to “why Ubers can find you better than an ambulance can,” he pointed out the Federal Communications Commission (FCC) has mandated phone carriers must improve such accuracy by 2021. Their goal: to provide an emergency caller’s location accurately at least 80% of the time.

From there, the host laid bare the service’s most insidious problems: staffing, fragmentation and technology. The country’s 5,899 911-dispatch centers operate on a hodgepodge of different technological platforms—sometimes even within the same county or municipality—with little to no systemic coordination. And in six states, there is no single, state-wide governing oversight of 911 services.

More ominous still, because of funding shortages, dispatch centers are chronically under-staffed. Workers complain of being over-worked, over-stressed and under paid. And emergency callers get placed on hold during peak moments of crisis. “It seems 911 staffing problems are one of those things a ridiculous number of cities have,” said Oliver. “Like a Chinatown. Or a statue of someone racist.”

Oliver went on to detail what he called “an even bigger strain on the system”: the kind of accidental calling that occurs when people sit on their phones. “Approximately 84 million 911 calls a year nationwide are butt dials,” a broadcast news clip played on Last Week Tonight said. “One person even butt dialed 911 136 times,” another reporter added.

“We have an antiquated, disjointed system, populated by workers who are understandably sick of listening to people’s butts,” Oliver said in summation.

Watch the entire segment below: