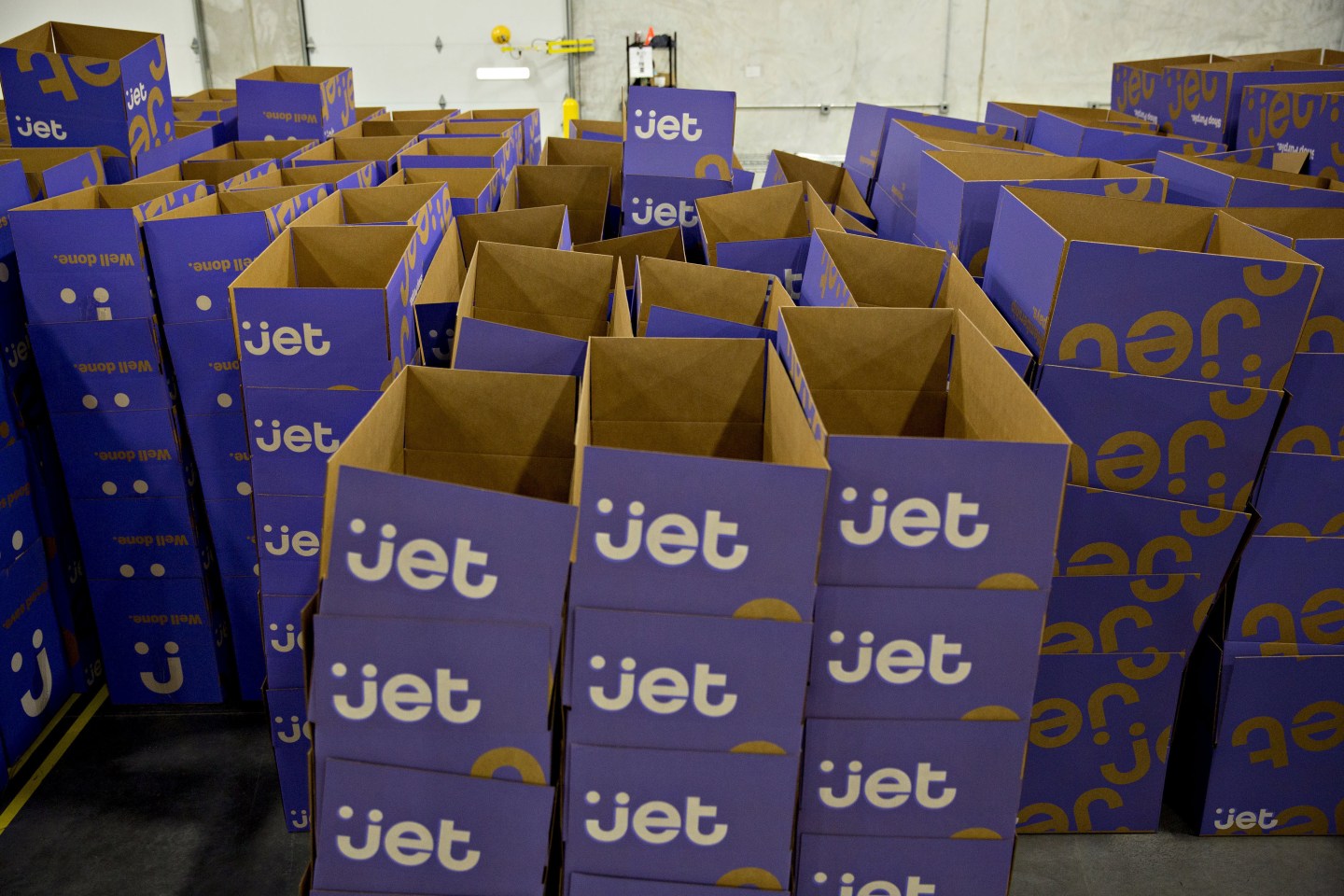 Empty boxes sit in stacks at the Jet.com Inc. fulfillment center on Cyber Monday in Kansas City, Kansas, U.S., on Monday, Nov. 30, 2015. Online sales on Cyber Monday may rise at least 18 percent from a year earlier, slower growth than during the holiday weekend, as consumers start their Internet shopping earlier, according to forecasts by International Business Machines Corp. Photographer: Daniel Acker/Bloomberg via Getty Images
Photograph by Bloomberg via Getty Images

The company generated a huge amount of buzz by raising hundreds of millions in funding before even opening its doors in July. Its goal is to take on Amazon (AMZN) and other e-commerce giants by selling everything from household goods to sports equipment to electronics.

In the past month, Jet quietly started testing an expansion into groceries sales in 875 zip codes in New York City, New Jersey, Washington D.C., Connecticut, and Pennsylvania, as first reported by tech news site Recode. Milk, fruits, vegetables, cereal and canned goods are just some of the items available.

A spokesperson for Jet said that fresh groceries are fulfilled from a refrigerated warehouse in Swedesboro, N.J., which is also where Jet’s East Coast fulfillment center is located.

The fact that Jet, which was valued at $1.3 billion in its latest funding round, is delivering groceries from its own warehouses follows Amazon’s footsteps with its grocery business, AmazonFresh. It too stores groceries in its own warehouses and provides grocery delivery to a number of U.S. cities, including Seattle, San Francisco, and Philadelphia.

Google’s Shopping Express along with rival Instacart follow a different strategy that involves partnering with grocery chains like Whole Foods to deliver items directly from their stores.

Jet said that its groceries will be delivered within one to two days, and orders above $35 won’t be charged a delivery free. Jet emphasized that grocery delivery is still in “pilot mode” and that changes are possible.

Amazon Wants Into the Grocery Business. Is It a Good Idea?

In addition to facing competition from AmazonFresh and Instcart, Jet will also go up against PeaPod and FreshDirect, both of which deliver regionally on the East Coast.

It’s unclear how this effort will help Jet in its challenge against Amazon and other more established e-commerce players. Groceries are a low-margin business, and previous reports have indicated that Jet is bleeding money in its quest to take on Amazon.