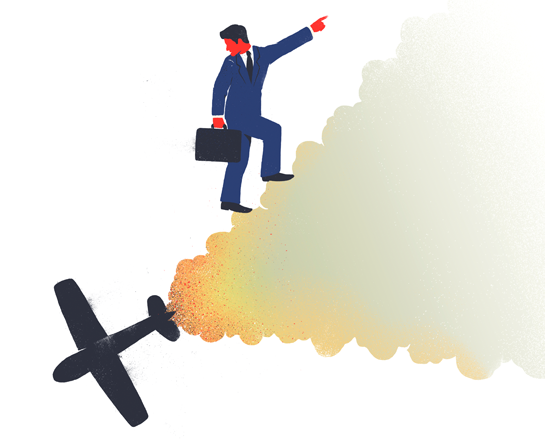 Illustration by Sébastien Thibault for Fortune

Is your organization depressed yet? The people whom business leaders lead are absorbing an onslaught of downbeat messages, and that’s a problem.

Consider: The latest earnings reports are revealing the steepest drops since the recession. Many analysts assert that stocks are overpriced, pointing out correctly that U.S. corporate profits peaked in 2014. The McKinsey Global Institute believes global profits are shrinking as a share of world GDP and will keep doing so for years. In a new book, Northwestern University’s Robert J. Gordon argues powerfully that U.S. economic growth is in long-term decline. Perhaps we needn’t add that presidential candidates of both parties are stoking the worries, having learned that “I feel your pain” is an effective message.

A crucial element of every leader’s job is defining a bright, realistic future, and it isn’t easy just now. But it can be done. Here are three strategies that effective leaders use to keep spirits high in times like these.

1. Show how you’re different. Everyone understands that the world doesn’t distribute pain evenly, and many companies can show that they’re an exception to low-growth trends. For example, the health care sector reliably grows faster than the economy and is widely forecast to keep doing so. Even in slow-growth industries, leaders can point out that their own company is thriving and should continue to, though that tactic works only if outside observers, such as stock analysts, support the claim. If not, then leaders need a more fundamental and demanding strategy, namely …

2. Confront problems head-on. Happy talk never works. Action might. When Satya Nadella became Microsoft’s CEO two years ago, the company was widely perceived as trapped in yesterday’s slowing businesses and virtually invisible in fast-growing areas of mobile devices and cloud services. Nadella responded with a quiet revolution, making peace with old enemies so Microsoft (MSFT) software became easy to use on Apple and Android devices, updating the business model by giving away Windows for all devices with nine-inch or smaller screens, and turbocharging the cloud business. After years of barely matching the S&P 500, the stock has trounced it since Nadella became chief. But of course even leaders who are crushing it can’t rest. They know …

For more on leadership, watch this Fortune video:

3. In slow times, move fast. Trying to earn a profit in the smartphone business is almost impossible if you aren’t Apple (AAPL). Only one company, Samsung, is doing it. Its “secret” is no secret: a deep-rooted culture of speed, maintained by Samsung Electronics CEO Oh-Hyun Kwon. That has enabled Samsung to keep up with and sometimes even surpass Apple in product development. That’s why, in the largely saturated U.S. market, only Apple and Samsung have double-digit market shares.

Slow times are nobody’s idea of fun. But they’re no excuse for a leader’s failure to keep an organization excited, optimistic, and growing.

A version of this article appears in the May 1, 2016 issue of Fortune with the headline “How Good Leaders Handle Bad Times.”