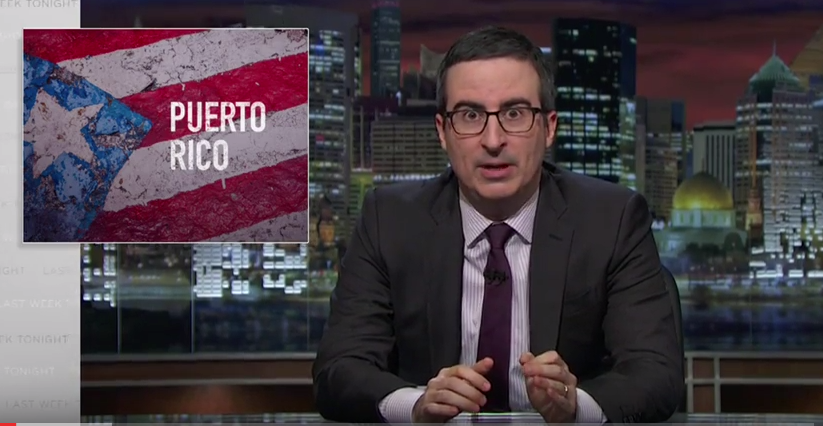 John Oliver is unrivaled at enlisting celebrities from across the spectrum to help him comfort the afflicted and afflict the comfortable with sharp-elbowed comedy.

A commonwealth with not a lot of wealth: a $70 billion topic of conversation

Hoping to God, John Oliver’s comical dissertation resonates with Congress that got us in this situation

Along with suicidal tax incentive situations.

The son of Puerto Rican immigrants, Miranda’s rousing, a cappella performance capped off an 18-minute segment in which Oliver laid out the economic jockeying, corporate greed and loophole purgatory that has made Puerto Rico a financial “time bomb.” It now faces $70 billion in public debt, a 45 % poverty rate, tens of thousands of people fleeing the island for the U.S. mainland, and an almost inexplicable exemption from Chapter 9 bankruptcy protection.

Problem A: Although the entire population of 3.5 millions Puerto Ricans are technically U.S. Citizens, according to the 1901 Supreme Court ruling Downes v. Bidwell, Puerto Rico is not subject to the Constitution’s protections and provisions because the territory is “foreign to the United States in a domestic sense.”

“Which sounds like what a liquor store clerk says to try to sell cases of Miller High Life,” Oliver quipped. “‘Ooh, you’re looking for a quality foreign beer? I’d call this “foreign in a domestic sense.’”

After many years as a thriving manufacturing economy, new tax laws and global recession hit Puerto Rico hard in the mid-2000s. Oliver’s report detailed how the territory kept money flowing in, however, by issuing municipal bonds—essentially high-interest IOUs exempt from local, state and federal taxes—an irresistible triple treat in the comedian’s eyes. “Triple is the best you can get,” Oliver said. “Like triple fudge brownies!”

Wall Street—in particular, hedge fund managers for so-called “vulture funds”—loved the bonds. Puerto Rico became “addicted” to borrowed money, according to a local politician. And the Puerto Rican constitution was amended to guarantee payment to bond holders ahead of the funding of basic government services such as schools and hospitals.

If you’re wondering why, you’re not alone.

Debt turns the lights off

What ultimately plunged the territory into its “dire crisis” was a technical amendment that reportedly no one can account for that was bundled into the Bankruptcy Amendments and Federal Judgeship Act of 1984. In effect, the measure ensured Puerto Rico lost access to Chapter 9 bankruptcy proceedings and the ability to restructure its debt.

“So the next time your obnoxious friend tells you, ‘Everything happens for a reason,’ you can say, ‘No Dan, not the 1984 provision exempting Puerto Rico from bankruptcy protection. So shut the [expletive] up!’” Oliver said.

To highlight the human cost of so many bad deals, predatory legal challenges by “vulture funds” and questionable governance, Oliver pointed out that Puerto Rican hospitals are literally struggling to keep the lights on because they can’t afford to pay electricity bills. And doctors from the territory are estimated to be leaving at the rate of one per day at a time when the Zika virus is expected to strike one in five Puerto Ricans.

He took a big-picture view of the island’s staggering debt, industrial collapse, school closures and sudden influx of “tax-dodging assholes”: “It’s like the island is being hit with all the plagues that God felt were too ‘thinky’ for the Bible,” Oliver exclaimed.

“The good news here is, Congress is now considering a bipartisan bill that would give Puerto Ricans some breathing room to negotiate with creditors,” he said. While the details are still being ironed out, Oliver added: “This could be a real help to Puerto Rico.”

And to drive that point home, the fake anchor man introduced Miranda, who composed a new rap specifically for Last Week Tonight.

Watch the full segment below: