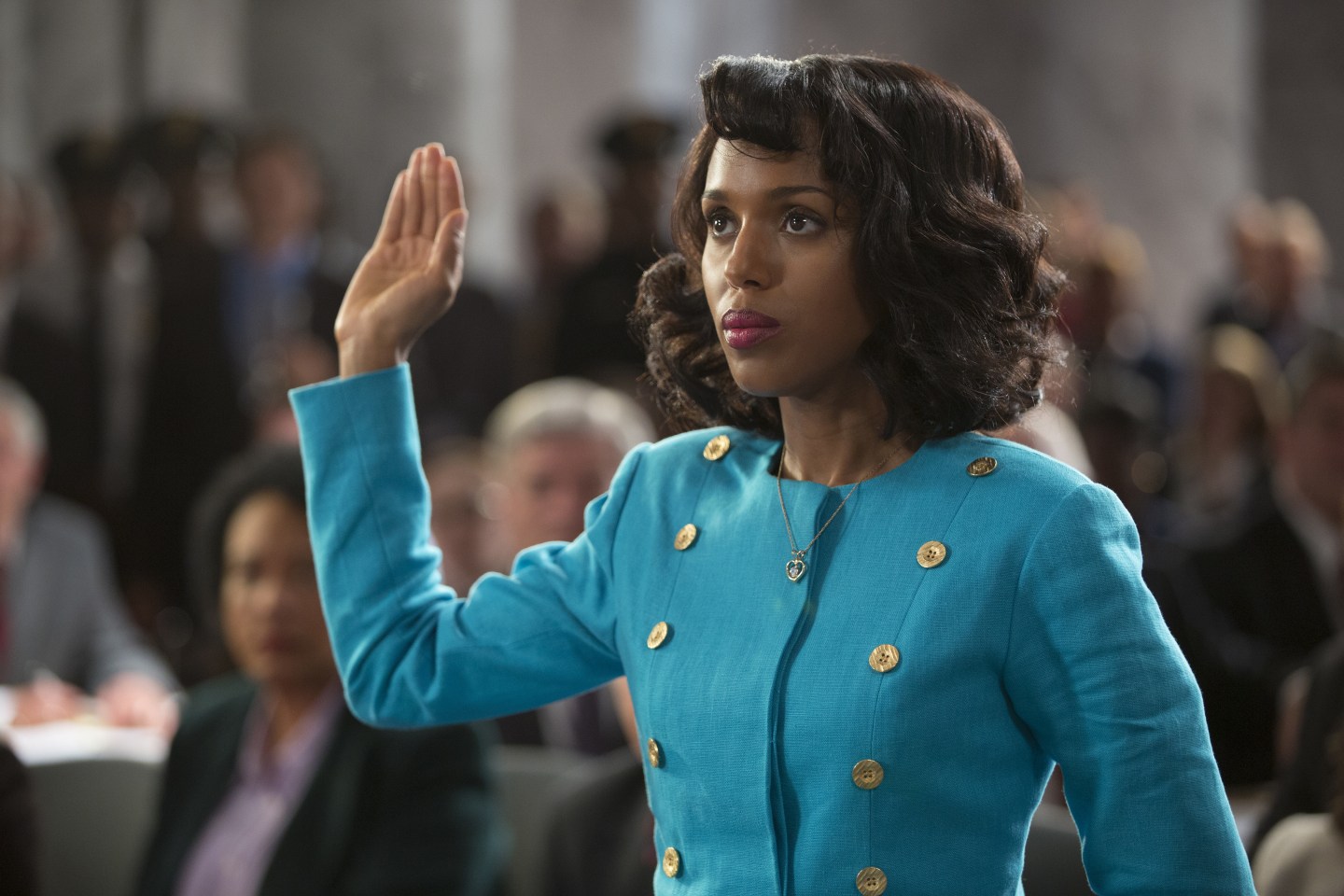 Television is in the throes of 1990s nostalgia. First, there was the popular FX series on the O.J. Simpson trial. Then, there was NBC’s announcement of a show about the notorious Menendez brothers case. And tonight, HBO is airing Confirmation, a scripted movie about Anita Hill’s role in the 1991 confirmation hearings for Supreme Court nominee Clarence Thomas.

The hearing spawned at least a half dozen books, but 25 years later, the event has largely faded into an historical footnote. But Confirmation shows us why the hearings shouldn’t be forgotten and explores the double bind of being black and female in America. Starring Kerry Washington (“Scandal”) as Hill and Wendell Pierce (“The Wire”) as Thomas, “Confirmation” largely focuses on the Senate hearings spectacle — including what happened in front of the cameras and all the political maneuverings happening behind the scenes. The film begins by reminding viewers that in 1987, Senate Democrats had led a bitter and successful campaign against Judge Robert Bork, President Reagan’s nominee to the Supreme Court for the associate justice seat vacated by Lewis Powell. So when Thurgood Marshall, the first and only African American on the Supreme Court, announces his retirement and President George Bush nominates Thomas, a conservative African American, to take his place, Bush and his GOP colleagues are determined to get Thomas approved.

But a female aide to Senator Ted Kennedy gets a whiff of the sexual harassment allegations and tracks down Anita Hill, then a conservative law professor at the University of Oklahoma. Hill reluctantly agrees to provide a statement, on the condition that it is kept confidential. “In my experience, in a case like this, the victim tends to be treated as the villain,” she says. But of course, her statement is leaked, she’s subpoenaed to testify before the Senate Judiciary Committee — and Hill’s prediction largely comes true.

Confirmation portrays both Republicans and Democrats on the all-male, all-white Senate Judiciary Committee as seeing Hill’s story as radioactive. Even current Vice President Joe Biden, then the Senate judiciary committee chair now known as an advocate for women’s causes, balks. “What if she’s lying?” he says to his female aide. “Can’t we just let it go?”

The movie shows the Senators pouncing on Hill, asking, Why would she stay in touch with Thomas if he had so horribly mistreated her? Why didn’t she ever speak up and complain? Hill’s credibility is attacked; she is accused of being either a liar or mentally ill. Thomas, meanwhile, is treated with kid gloves after he gives a blistering statement that accuses the Senate committee of racism. None of the Senators ask Thomas challenging questions. When another woman who worked for Thomas comes forward, prepared to make similar claims, Biden doesn’t call her to testify, and the Senate narrowly votes to approve Thomas’ nomination to the Supreme Court.

This leads the viewer to ask: do we have a sitting Supreme Court judge who once perjured himself during his confirmation hearing? The director, writer and Washington, who is executive producer, all have maintained that their film isn’t taking a position on who told the truth. The film shows Thomas in private moments, at home with his wife, railing against the Senate and the unfairness of the proceedings. But Confidential is definitely not nonpartisan. Anita Hill is clearly the heroine in this account. And that’s how it should be. Although some will argue over the film’s accuracy, there’s no denying that Anita Hill’s famous testimony, which was watched on television by millions, led to an awakening that resulted in a surge of women filing sexual harassment complaints and inspired women to run for office. The next year, 1992, so many women were elected to Congress, it was called “The Year of the Woman.” (The count rose to 24 women in the House and six in the Senate).

Watching Confirmation, though, left me with an unsettling feeling that there is still a lot of unfinished business. Just like FX’s series on O.J. Simpson, Confirmation makes a compelling case that justice was denied, and highlights problems — politics, and race and gender blindspots — that continue to bedevil America 25 years later.