This Huge Millennial Dance Party Is Literally Taking Over Macy’s 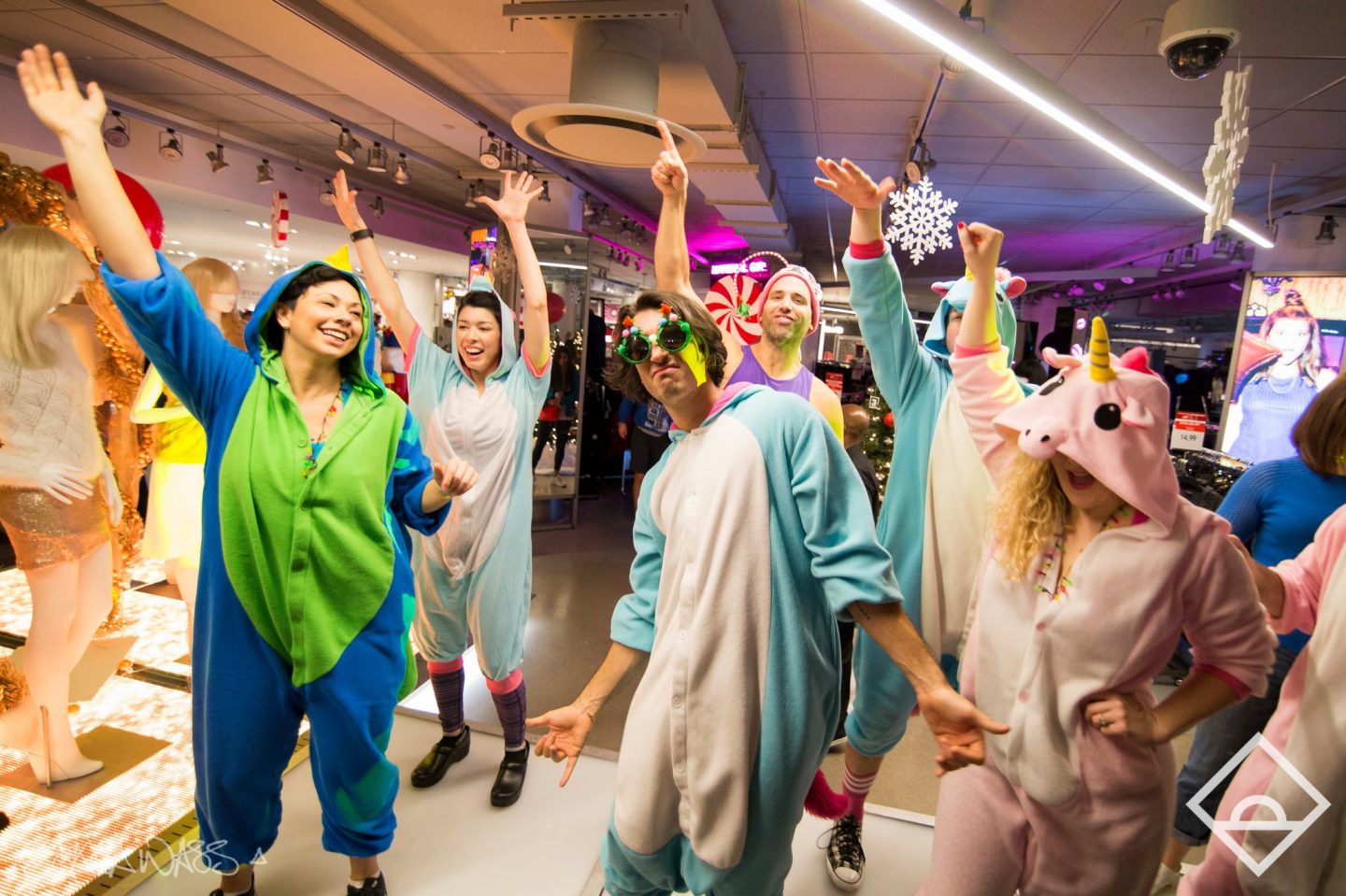 Next Wednesday, Macy’s flagship store on 34th Street in Manhattan will throw a massive rager more fit for an abandoned warehouse than the iconic department store—and it won’t even make you late for work.

Daybreaker, a Brooklyn-based event startup that has been hosting pre-work alcohol- and drug-free “raves” in trendy nightclubs—and even on boats—since 2013, has recently attracted some Fortune 500 partners. For its next party on April 20, Daybreaker will take over eight floors of Macy’s 11-floor store in Herald Square, pushing clothing racks aside to make way for a DJ booth, dance floor, obstacle course—and 1,000 early-morning ravers. The event kicks off at 5:45 a.m. and will be over by 9 a.m., well before Macy’s officially opens for business at 10 a.m.

It’s the second time that Macy’s (M) will collaborate with Daybreaker. In December, Daybreaker hosted holiday-themed events at Macy’s in New York, San Francisco, and Chicago—but it kept the location a secret, telling ticket buyers only the nearest intersection, instead of an address.

For Daybreaker, which says Macy’s approached it in the fall after its marketing team surreptitiously scoped out one of its New York boat parties, taking the retailer on as a sponsor was a bit of a gamble that risked making its brand look “too corporate,” says Daybreaker co-founder Matthew Brimer, who also co-founded education startup General Assembly. If done well, though, it might achieve the hipster, ironic vibe that defines much of today’s urban millennial social scene: “What’s the most absurd place or location you can imagine for a dance party, right?” says Brimer. “Maybe it’s a department store!”

The holiday parties (captured in YouTube videos) were not just a hit for Daybreaker, which says it is already profitable thanks in large part to corporate sponsors underwriting its costs, but also for Macy’s, which sold through much of its “ugly” Christmas sweater inventory by the end of the events. Wesley Whatley, a creative director for Macy’s famous annual Thanksgiving Day Parade, is also involved in planning the Daybreaker events; at the New York party in December, several performers and event organizers outfitted themselves in costumes left over from the parade, dancing alongside the retailer’s mannequins. “It’s probably one of the most ridiculous events that we’ve ever had,” Brimer says.

Macy’s is aggressively trying to lure younger shoppers to its stores after its sales slumped last year. It wanted to “tap into” Daybreaker’s “fan base” and show them what the store has to offer first-hand, says Macy’s spokesperson Elina Kazan: “With Daybreaker, we are able to transform a department store into one of the hottest tickets in town.”

Indeed, tickets for next week’s full Daybreaker program, costing $32 including a multi-floor workout circuit at the beginning, are already sold out; the remaining tickets cost about $22 for entry into a two-hour dance party starting at 7 a.m. Coffee, green juice and breakfast snacks are all provided free to attendees. But there won’t be a bar serving alcohol, or even soda. That’s not just because many partygoers head straight from the event to the office: Daybreaker considers itself a wellness company. In addition to dance-floor cardio, some events incorporate yoga.

That’s helped it land deals with other brands like Nike (NKE), which sponsored a Daybreaker party late last year on the former site of the New York Police Department’s horse stables. “Macy’s can’t collaborate with brands that are nightlife-driven because they’re drug- and alcohol-related,” says Radha Agrawal, Daybreaker’s other co-founder. (Agrawal also co-founded Thinx, a startup selling underwear for women on their periods.) “Because we’re sober, we’re a much safer bet for brands.” Daybreaker has turned down other interested sponsors whose products it deemed unhealthy, she says.

Daybreaker is designing its fitness circuit to wind through Macy’s “athleisure” department of clothes by Lululemon (LULU), Puma, and others, as well as other sections of the newly renovated store. There will be potato sack and wheelbarrow races, tug-of-war and Double Dutch jump rope competitions. Attendees will also receive $10 Macy’s gift cards; if they want, they’ll be able to use the coupons to shop at Macy’s new millennial floor, which will open exclusively to attendees for an hour after the event.

Now throwing parties in 10 cities including London and Paris , Daybreaker has nearly 200,000 “community members” across the world, Agrawal says. It does not have any outside investors, though it is “getting approached left and right,” she adds. Daybreaker is planning to launch a regular fitness-focused event that may fall more into the genre of alternative races like Tough Mudder.