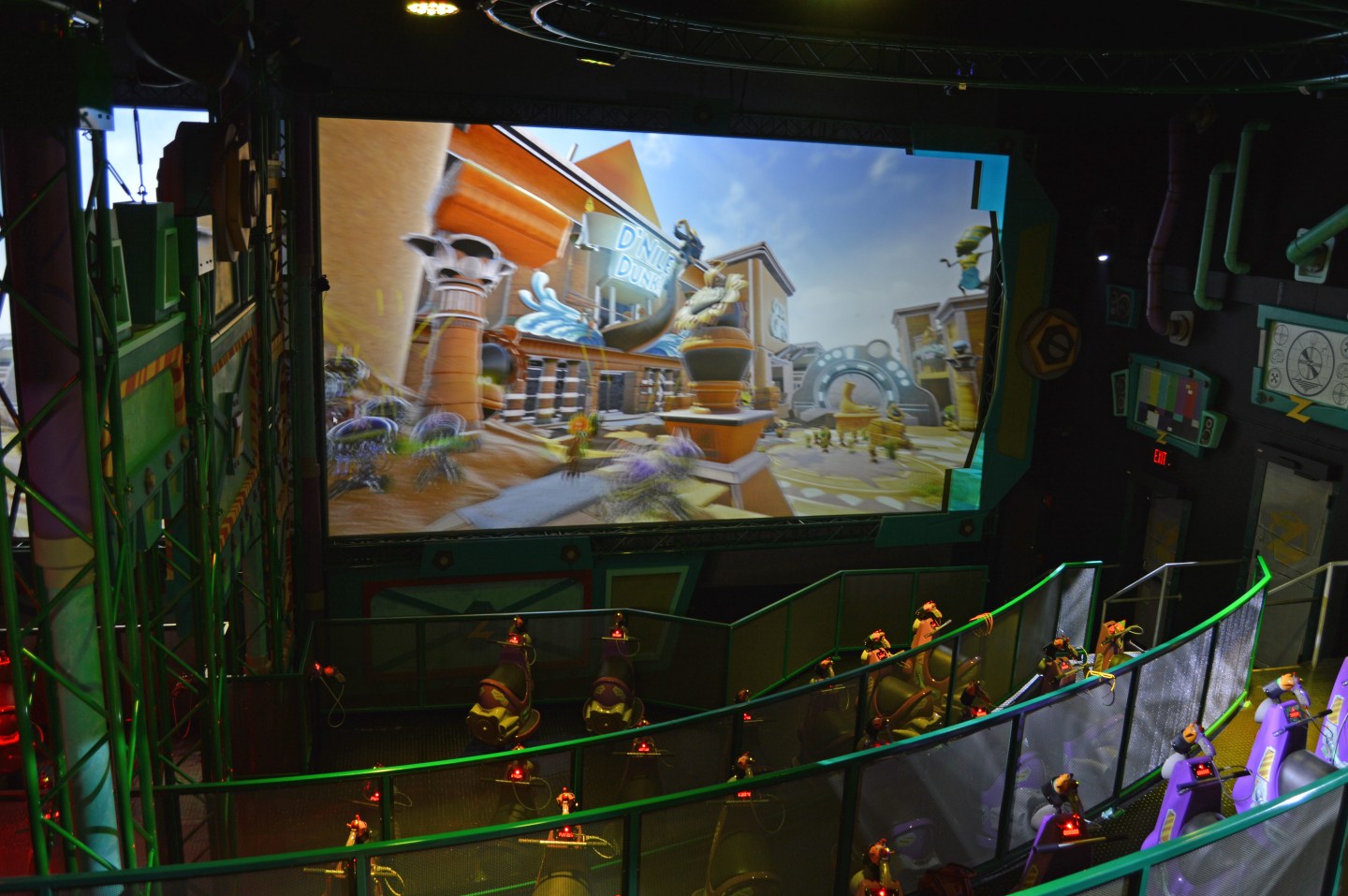 Electronic Arts’ (EA) PopCap Studios has sold millions of copies of Plants vs. Zombies games across all platforms over the years. But the most recent addition to the franchise can’t be played anywhere but at Carowinds theme park in Charlotte, N.C.

Plants vs. Zombies Garden Warfare: 3Z Arena is the latest attraction at the Cedar Fair-owned theme park. It pits two theaters filled with guests, armed with military-grade infrared guns, against either plants or zombies in a battle for a high score.

“Guests will fight alongside Crazy Dave’s Plant Army or with Dr. Zomboss and his faithful Zombie Hoard on a quest to gather the most golden gnomes and all of their fantastic powers,” says Brad Marcy, vice president and general manager of Carowinds.

Technology company Alterface Projects’ interactive gaming system enables two completely different but fully synchronized experiences, where the collective scores of each side will determine the outcome of the story. Marcy says “intra-active” elements allow one side’s actions to have an impact on what’s happening to the team on the other screen. Additionally, motion seats add another layer of immersiveness as guests move through the game environments from scene to scene.

Alterface Projects’ media partner, Pure Imagination Studios, created the interactive gameplay based on content and characters they received from PopCap. But since that game wasn’t built with Unreal Engine 4, they had to create life-sized versions of the colorful cartoonish characters.

“The Pure Imagination team has been working closely with Epic Games to bring their technology into the attraction industry,” says Tom Gass, partner at Alterface. “The studio has written proprietary code to push the engine to handle the significant requirements needed for large-format interactivity required in a theme park environment.”

“Our team at PopCap wanted to create something special that stood out and above what a lot of other brands do, and we wanted to theme it as if it were a part of our wacky universe,” says Jeremy Vanhoozer, senior creative director of the Plants vs. Zombies franchise at Electronic Arts-owned PopCap.

The attraction also connects directly to EA’s recently released Xbox One and PlayStation 4 Plants vs. Zombies Garden Warfare 2 game, in which the zombies have taken over suburbia and in the process created an enormous technology company called Z-Tech.

For more on amusement parks, watch:

“The building that houses the Carowinds attraction is themed out as a Z-Tech warehouse, complete with ominous bubbling tubing, and signage that talks about the backstory of the plants and zombies,” Vanhoozer says. “The main goal of this theme park adventure is to travel through time portals and collect golden gnomes. In the console game experience, you have the very same goal of collecting the mysterious golden gnomes.”

The theme park industry, including Disney Parks and Resorts, has been adapting to the growing audience of tech-savvy gamers who now expect interactivity everywhere.

“Today’s young guests don’t necessarily want to be passive participants and expect to play an active role in their entertainment experiences,” says Christian Dieckmann, corporate vice president of strategic growth at Cedar Fair (FUN). “They are also extremely comfortable interacting with technology in a deep and intricate way. Accordingly, the next wave of digital amusement park attractions will likely feature increasing levels of sophistication of both interactivity and immersiveness, something Cedar Fair is actively exploring.”