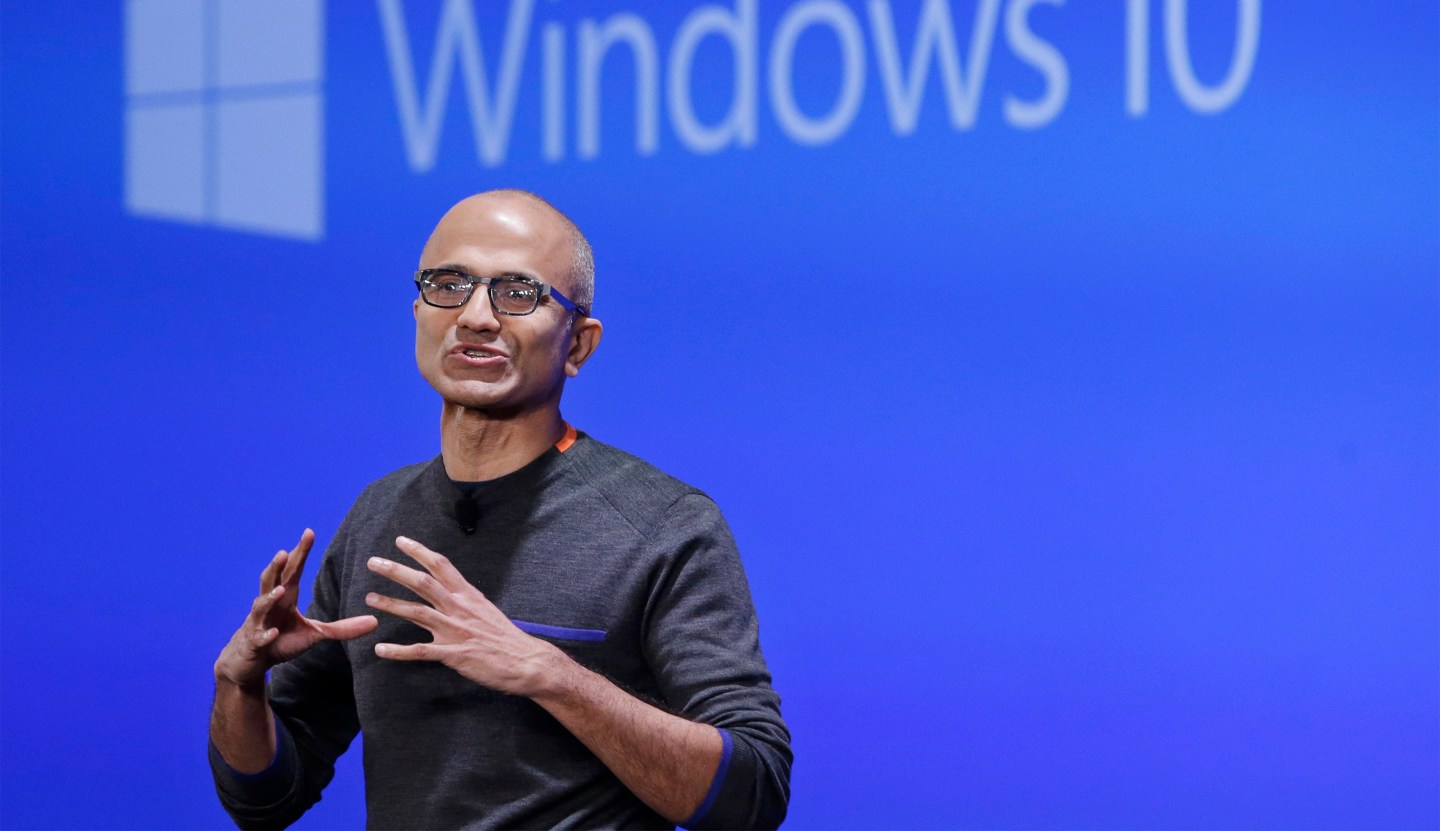 In the future, people won’t have to waste time fidgeting with their smartphones as they try to order pizza from an app. They’ll just have to talk to the device, and little software helpers will do all the work for them.

At least, that’s the way Microsoft CEO Satya Nadella sees it. Nadella outlined his vision of the future of human and computer interaction during Microsoft’s annual developer conference in San Francisco on Wednesday.

For Nadella, using “the power of human language” to communicate with machines will be as profound as the development of the Internet and the use of touchscreens on mobile devices.

At the center of Nadella’s glimpse into the future is Microsoft’s (MSFT) Cortana personal assistant software. Microsoft has been pushing Cortana as an easy way for consumers to ask for directions to movie theaters, remind them of tasks, and even send emails.

Similar to other digital assistants like Apple’s (AAPL) Siri and Google Now, Cortana is powered by machine-learning algorithms that train the service as it ingests data from users every time they ask it a question. Although these digital assistants don’t always work correctly, they are getting better.

Nadella is betting that Cortana will eventually get so good at answering questions that people will stop moving their fingers and start moving their mouths to perform daily tasks on their devices.

Besides Cortana, Nadella also believes that so-called chat bots will be an important element for computer interaction. These software programs, which are increasingly used by retailers and investment companies on their websites, prompt visitors to ask basic questions and then answer them.

Like digital assistants, however, these chat bots are getting better at understanding human language as coders wire them up with machine-learning capabilities. With more advances in artificial intelligence like natural language processing, bots are now capable of performing more advanced tasks like ordering a ride from Uber for people who ask for one through workplace messaging service Slack.

Microsoft executives demonstrated on stage how placing orders for a dessert delivery would be almost completely handled by software.

For example, Lilian Rincon, an executive for Microsoft’s Skype Internet calling service, showed that she could talk to Cortana within Skype, and have Cortana interact with a software bot created by a bakery to coordinate a cake delivery. Rincon also showed off how Cortana would one day be able to learn from a user’s previous chat messages and anticipate what that person will want.

In one example, she showed how Cortana had deduced that she would be traveling out of town for a conference. It then decided to help her by looping in a chat bot from the Westin Hotels to show her some available rooms during the dates she was traveling.

Everything worked smoothly. But this was merely a demonstration, after all. In real life, artificial intelligence technologies and chatting software don’t always work as intended.

“We want to build more technology so that it gets the best of humanity and not the worst,” Nadella said as the audience of coders laughed.

They were chuckling because last week, a Microsoft research project involving an experimental chat bot named Tay went haywire after Internet pranksters fed the bot offensive language, which trained it to say hostile things. Nadella addressed the problem by saying that Microsoft “quickly realized that it was not up to the market” and took Tay offline.

“And so we are back to the drawing board,” said Nadella.

Hiccups aside, it’s clear Nadella views chatting and voice commands as a way to spread Microsoft’s influence. It’s also noteworthy that he laid out the future of voice interactions at a developer conference.

Microsoft is continuing to push the idea to coders that they can trust the company and build software using Microsoft technology. This is not the same company under former CEO Steve Ballmer, who preferred a more closed business that critics say missed the boat on new technologies. Ballmer even admitted in 2014 that Microsoft failed to anticipate the rise of mobile computing during his tenure.

Nadella wants coders to believe that Microsoft is a new company that is on top of the latest technological trends.

And while Microsoft may brag about how smart Cortana is, it will need companies to build the advanced chat bots that will help Nadella’s vision of the future to become reality. Without outside coders building the versatile chat bots that enable Cortana to book hotels and order pastries, Nadella’s future of voice interactions will fail to pan out.