This Is the Man Responsible for Your Binge-Watching Addiction 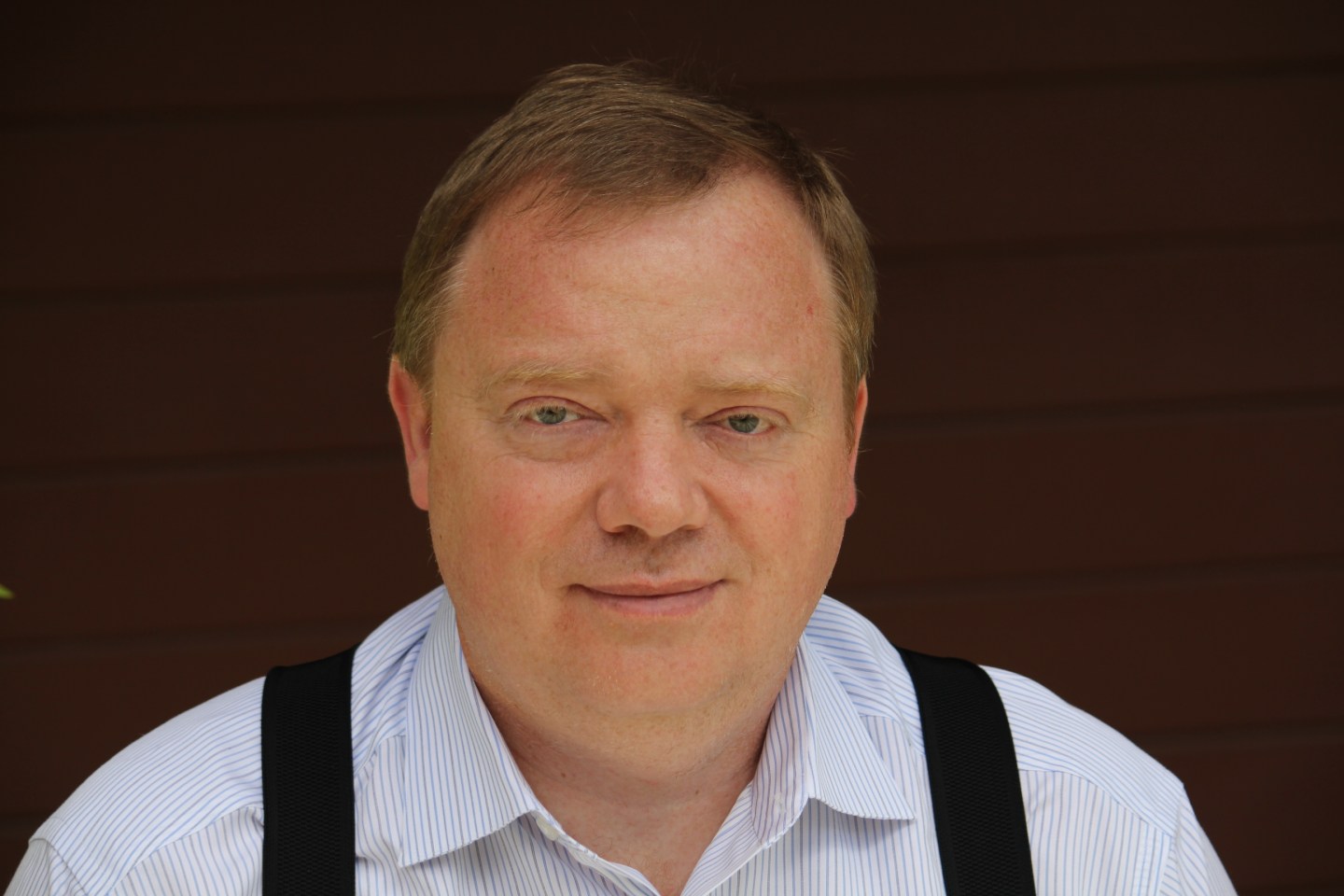 Anthony Wood probably won’t read this article. He doesn’t pay much attention to his own press, says Tricia Mifsud, the vice president of communications at Wood’s company, Roku. Mifsud ought to know: she did public relations for one of his earlier ventures, ReplayTV, making it her job to drum up all the press she could. That was in the late ‘90s, when ReplayTV was locked in a struggle for market dominance with a little company called TiVo. Wood had invented the digital video recorder, or DVR, and TiVo was hot on his heels—at the Consumer Electronics Show in 1999, their booths were side by side.

The rest of the world, happily streaming its brains out on Netflix and Amazon, has forgotten the “DVR wars,” but Wood remembers. And he remembers the outcome. Although ReplayTV won Best of Show in its category at CES, and although Walt Mossberg, then a kingmaker of consumer technology at The Wall Street Journal, chose ReplayTV’s product over the TiVo in a head-to-head review, it was Wood’s flashier competitor that went public, got the celebrity endorsements and became a household name.

At first, like the horse in Animal Farm, Wood’s reaction to this setback was simply to work harder. But then the dot-com bubble burst, and he had to sell. For most founders, a $110 million exit would be a huge success. For Wood, it was a curtailing of his dream.

But he could see the future coming. He had jotted it down in a notebook years earlier, long before the technology was ready. The future was streaming video. The DVR was only a midpoint, a stepping stone. In 2002, one year after selling ReplayTV, he launched Roku, a company whose ambition is nothing less than to be the operating system for television.

Roku, as its founder and CEO can’t help mentioning, is now worth more than TiVo (TIVO), which has a market cap of about $770 million. “Usually you fail a few times before you win,” he says.

Wood, who just turned 50, has been founding companies his entire adult life. Growing up—first in Manchester, England, and then in Georgia and Texas—he was one of those kids who tinkers with everything. He built transistor radio kits, a Morse telegraph. He spent the eighth-grade in the Netherlands, where he took a computer class and taught himself how to program. Back in Texas, he got his first computer, a used TRS-80, and began writing software; one program, he says, was like a “very early version of BitTorrent.”

In his junior year at Texas A&M University, where he majored in electrical engineering, Wood started a company called SunRize Industries that made software for the Commodore Amiga. He soon grew SunRize to 14 employees and about $100,000 in profit, in the process almost flunking out of school. “I would optimistically sign up for classes and then fail to attend them,” he explains. Forced to choose, he shuttered the company and completed his degree.

After graduation he moved to Silicon Valley with his girlfriend, now his wife, a fellow Texas A&M graduate he had begun dating after hiring her at SunRize. He founded SunRize “version two,” but when Commodore began tanking, he launched a new company, iBand, to take advantage of the coming dot-com boom.

The company’s signature product was a user-friendly editor for web pages. One year later, in 1996, Macromedia scooped up iBand for $36 million, and Wood took a job as the company’s vice president of Internet authoring. It was the first time he had ever worked for anyone else. He was 30 years old.

Wood’s primary aim during these years was to make money, and lots of it. “I didn’t grow up very rich,” he says. “My dad grew up pretty poor, and then he did better [for himself], but we didn’t have that much money. So I was like, ‘Wow, these guys start businesses and they get rich. That sounds great!’ It wasn’t really well thought out.”

“It’s not an honorable motivation,” he adds, his honest English face flushing, “but it does work.”

Once he’d made the money, he wasn’t afraid to spend it. Steve Shannon, who co-founded iBand and is now general manager of content and services at Roku, paints a picture of Wood at this time as almost preternaturally confident and driven: “Imagine if you had half a million bucks to your name that you had earned through your own sweat equity. I think most people would want to squirrel that away or maybe put it in a house. But Anthony is just a double-down kind of guy, so he took that money and rolled it into his next startup.”

It’s a gamble Wood has made repeatedly in his career. His tenure at Macromedia was rocky, and involved a demotion in fact if not in title. When his two-year contract was up, he left to found ReplayTV. A fan of Star Trek: The Next Generation, he was often frustrated at having to miss new episodes when they aired. Out of that frustration his company was born. “I felt like it was a risky business to start,” he says, “but I figured at least I’ll get a DVR out of it.”

Related: What Does It Take to Be an Intrapreneur? This Exec Did It.

He financed the venture himself at first before bringing in angel investors, one of whom was Marc Andreessen, the creator of Netscape. In 1999, Andreessen, now one of the most highly regarded venture capitalists on the planet, called ReplayTV “just about the coolest thing I’ve ever seen.” He invited people to see it as a kind of Netscape for TV, saying it would “provide a portal to personalize and manage the chaos of thousands of hours of television programming raining down on people daily.”

Ultimately, ReplayTV had to be sold for less than the amount of funding it had raised, and SONICblue, the company that acquired it, went belly up two years later. But the vision Andreessen conjured up is one that Wood is now achieving with Roku.

Roku started out as a device company, selling its set-top box to consumers, but today it makes money in four ways: through the sale of Roku players and Streaming Sticks, which plug into your TV’s HDMI port; through the sale, by five partnering brands, of Roku TVs, which have the same technology baked right in; through revenue-sharing agreements with more than 3,000 content providers; and through the sale of ads on its platform. Most of the channels on Roku are ad-supported, and Roku itself is typically given a percentage of the ad inventory on these channels to sell, contributing directly to its bottom line.

Its competitors are Apple (AAPL), with Apple TV; Google (GOOGL), which has Chromecast and Android TV; and Amazon, with its Fire TV and Fire TV Stick. Yet the market is not so crowded as it seems, Wood argues. Actually, it has shrunk over time, with lesser players falling away until only these four remain. “It’s a four-horse race,” Roku content head Shannon says.

According to NPD Group, the number of American households with streaming media players will reach 40% by 2017, more than doubling in only three years. Where Roku’s competitors are, as Mifsud puts it, “ginormous companies that make a ton of products,” Roku is singularly focused on transforming the TV experience.

In 2009, the company split in order to maintain this focus. There is Roku, led by Wood, and BrightSign, led by Jeff Hastings, the former head of engineering at ReplayTV. BrightSign pursues commercial applications of Roku’s core technology: electronic billboards, digital retail displays, and the like. Last year, its revenue was $41 million. In that same year, Roku, which employs 500 people, raked in just over $300 million.

Related: Apple’s Fight With the FBI Isn’t Keeping People From Wanting an iPhone

The numbers are now so large that even Wood admits they have become “impersonal.” Roku has 10 million active monthly users—a number that grew 50% last year—and nearly 1 million Roku TVs have found a place in American homes, capturing 8% of the domestic smart-TV market in barely more than a year. (Roku TVs are now available in Canada and will be available in Mexico in June.)

“If I look back on the Replay days, Replay just didn’t get as much traction in terms of the branding,” says Hastings, “whereas I think Roku has achieved that critical mass in the market versus its competitors.”

Roku users streamed 5.5 billion hours of content in total last year, and the average user in the U.S. streams more than twice as much as the average user of competing products, Roku executives say. In terms of retail product, says Shannon, “we roughly sell around the same volumes, but in terms of engagement we blow those guys away.”

It seems fitting that the man who is to blame for our binge-watching addiction is a binge-watcher himself. Wood, who has yet to comment on rumors that Roku will soon go public, recently marathoned the first season of True Detective in only two days. Even he isn’t sure what to make of the impact his technology has had on popular culture. He remains focused on the product. “I like solving problems, and businesses are like multidimensional puzzles,” he says.

The biggest problem is how to scale up without sacrificing excellence. According to Shannon, Roku has to turn away as many as 90 percent of the companies that want to partner with it. “We just don’t have enough people to light up a hundred different cable operators,” he says. “And they’re not going to sit around and wait for us. They’re going to find someone else to service their needs. So it’s really a land grab over the next few years, and we need to grab as much of it as we can.”

Wood, who is no longer driven by money but remains as competitive as ever, likes his odds.