This Office Park Is More Zen Retreat Than Corporate HQ 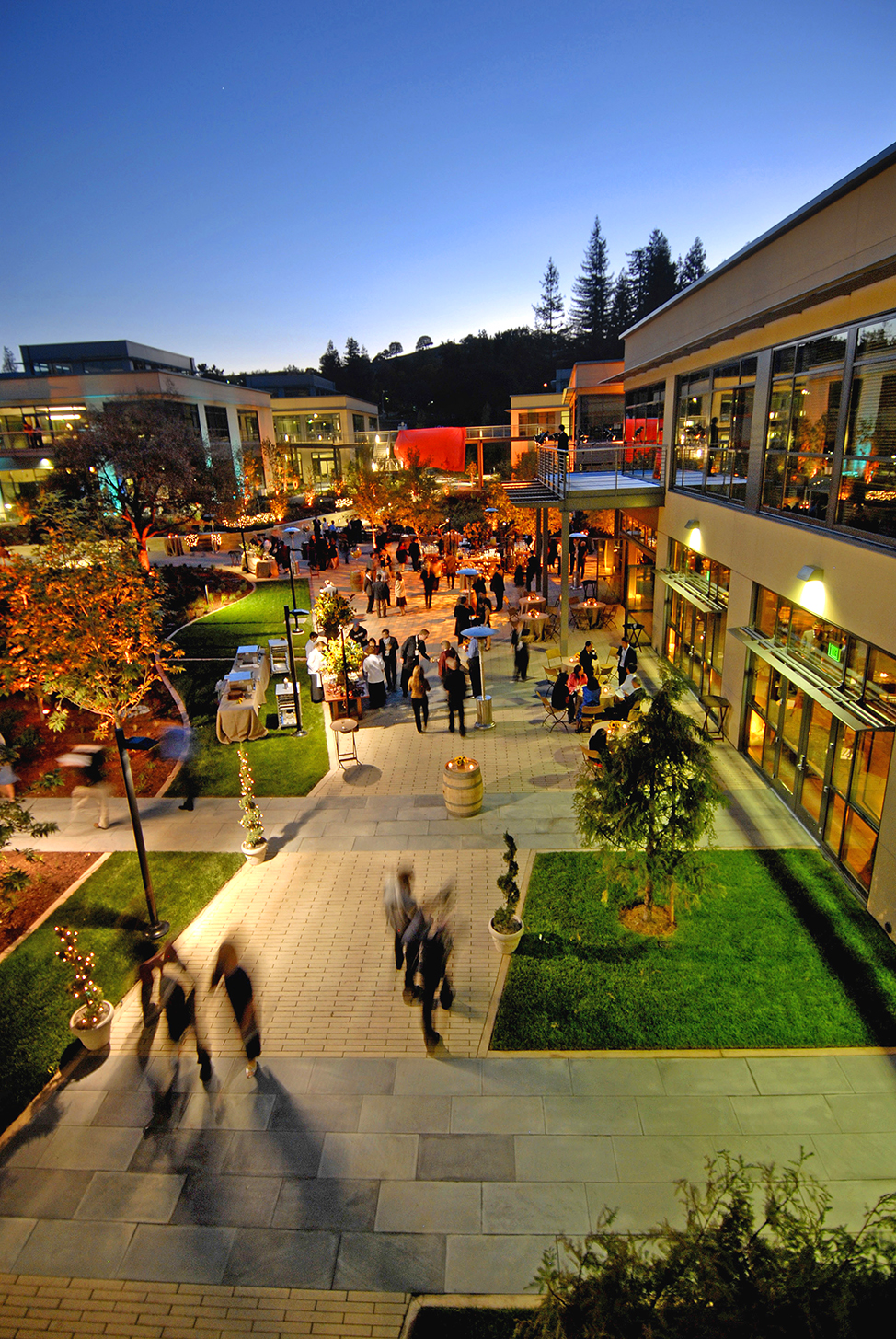 Tucked beneath Palo Alto’s rolling foothills on a 105-acre parcel of tree-lined land, VMware’s (VMW) campus feels more Zen retreat than corporate HQ. The company’s eco-friendly grounds are home to 75 palm trees, three nature trails, and a pond where 15 small turtles reside. A rectangular, 600-foot-long water fountain and an adjacent walkway connects two of the campus’s three clusters of buildings, giving the site’s 4,000 employees plenty of opportunities for outdoor time. There is also a soccer field, a recreational park with horseshoe pits, and two fitness centers.

VMware’s offices don’t have many of the trappings of the Disneyland-like campuses of nearby Facebook (FB) and Google (GOOG), which sport perks like brightly colored bikes, food trucks, and plenty of beanbags. But the Palo Alto company, which makes software that enables computers to be more efficient by running more than one operating system simultaneously, is making a much more understated mark on the Silicon Valley landscape—even as it faces headwinds to its business.

Many technology companies boast solar panels and reclaimed-wood floors in their corporate office buildings. But sustainability has deep roots at VMware, No. 40 on this year’s Best Companies to Work For list, up from its No. 65 spot in 2015. About a decade ago co-founder and then-CEO Diane Greene enlisted architect William McDonough, a leader in sustainable design, to construct the “campus in a forest.” (VMware was founded by five technologists in 1998. After spending six weeks in a Menlo Park apartment, the company began renting office space above a cheese shop in Palo Alto. VMware moved into its current location in 2008 and expanded significantly in 2011.) Greene left the company in 2008; she now serves as senior vice president of Google’s cloud business. But her mission to create a bucolic, eco-friendly environment at VMware lives on.

“We enable companies to take waste out of their systems,” says Nicola Acutt, VMware’s vice president of sustainability, “so it makes sense that sustainability thinking has been woven into our campus.”

VMware is so green that it has been forced to become less so in the wake of severe drought in California. The company stopped watering its lush lawns last year, and though the type of grass it planted is supposed to be drought-tolerant, the grass has browned in some areas. The rectangular water fountain has been turned off.

It’s not the only thing that’s drying up at the $6 billion technology company. VMware, long seen as the crown jewel in majority-owner EMC’s (EMC) portfolio (the data storage maker acquired the virtualization company in 2004 and then spun it out in an IPO in 2007), is facing uncertainty. Its headquarters paint a picture of serenity, but the company announced weaker-than-expected financial guidance for 2016, sending its stock down 11%, to $44.44, on one day in late January. (It has since recouped the losses and now trades above $50.) At that time the company also confirmed that it had laid off 800 employees, or more than 4% of VMware’s global headcount of 19,000, in restructuring. Gelsinger won’t share specifics on the packages offered to the workers who were let go, but a VMware spokesperson says that their severance included an undisclosed period of full pay and benefits, a lump sum payment based on years of employment, and outplacement services.

Leading Change in the Valley

1. A place in the sun
Photovoltaic (PV) panels installed throughout the campus divert more than 600 metric tons of carbon each year, equivalent to removing 125 cars from the road annually.

3. The forest for the trees
VMware’s campus has 1,500 trees, including an oasis of 75 palm trees and a fruit orchard with 90 flowering trees.

“The VMware culture breeds adaptive and resilient employees, having been at the forefront of disrupting the IT industry throughout the last 18 years,” Gelsinger says.

The key, says chief people officer Betsy Sutter, is in the messaging. “Employees can send questions via email or social collaboration tools,” she says. “We overprepared on communicating when it comes to the layoffs.”

Strategic realignment isn’t the only uncertainty on VMware’s horizon. The ramifications of the $67 billion Dell-EMC merger, up for approval in the coming weeks, remain to be seen. To assuage any anxiety over how that would affect VMware’s workforce, CEO Michael Dell made an appearance at the virtualization company’s recent senior leadership offsite in Huntington Beach, Calif. According to Sutter, Dell assured the team that VMware is both a jewel in EMC’s crown and a valuable asset in the impending purchase.

For more on the Dell-EMC merger, watch this Fortune video:

“He was very interested in our culture,” Sutter says. “We have the heart of a startup but the mind of an enterprise software company.”

Changes will keep unfolding in the cloud-computing market in which VMware competes. The potential turbulence makes VMware’s serene digs in Silicon Valley more important than ever.

See the full list of Fortune’s 100 Best Companies to Work For at fortune.com/bestcompanies, where you can also find job searching tips, career advice, and secrets from recruiters.

A version of this article appears in the March 15, 2016 issue of Fortune with the headline “The Garden of Eden.”