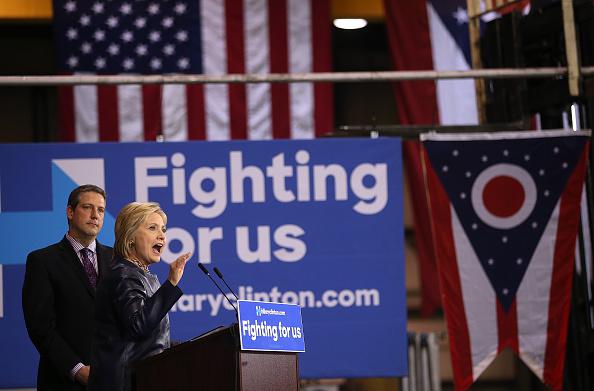 Hillary Clinton has learned the lessons of her Michigan meltdown. Maybe.

Standing in a loading dock in the Mahoning Valley on Saturday night, she vowed to bring back manufacturing jobs and helps small businesses. Surrounded by the working-class voters who sided with rival Bernie Sanders last week in Michigan, Clinton appealed to the blue-collar Democrats who supported her husband but have been wary of her.

“I will stand up for companies in Ohio,” Clinton said, her voice at times sounding hoarse from a primary that continues in earnest. “I am really, totally committed to bringing back manufacturing. I’m the only candidate on either side who actually has a plan to do that.”

Clinton’s host was a company founded in 1918 to provide parts for the Mahoning Valley’s steel industry. In recent years, it has transitioned to high-tech manufacturing and is a tech incubator. “The future of Youngstown is happening right here,” said Democratic Rep. Tim Ryan, who represents Youngstown in Congress.

Yet, his optimism is not widely shared in Ohio, let alone the former manufacturing hubs. Storefronts are boarded up. Houses are abandoned. Factories have mothballed wings if not completely shut down. A deep sense of dread pervades. “Being angry isn’t necessarily bad. It’s what you do after you’re angry that matters,” Ryan said, before comparing setbacks—the area’s and Clinton’s—to a sporting loss. “You watch film. You figure out what you did wrong. And then you put together a plan together so you don’t lose again,” Ryan said.

Clinton is trying to tap into a populism that has powered Sanders to wins. Her pitch post-Michigan is deeply worker-focused, and she is pitching herself more as an emotional pick than the wonk who rolled out a deeply considered manufacturing policy in Detroit. “I will be a strong supporter of the American labor movement and unions,” she vowed, drawing cheers from the crowd standing under beams that once moved steel.

Clinton is still the likely nominee. Her delegate count is outpacing Sanders and, even in loss, Clinton is still picking up the party activists who will crown the nominee this summer in Philadelphia. But the storyline is not on her side. She is trying to remedy the deep problems she faced in Michigan, where she saw a 20-point lead evaporate in the final days of campaigning. She ended up losing white voters by 15 points. Exit polls found 81% younger voters—those under 30—sided with Sanders, too. “Young voters, all they know is Benghazi,” shrugged Democratic Sen. Sherrod Brown of Ohio, a Clinton ally.

Michigan was a rout, for sure, and it left her campaign advisers frustrated. They aren’t sure that they won’t be feeling déjà vu when Ohio votes on Tuesday. After all, Ohio is like Michigan. Technology has made manufacturing jobs less labor-intensive, if not easier to outsource to cheaper workers abroad. It leaves deep anxiety throughout the Rust Belt.

One number that keeps giving Clinton supporters concern is the level of resentment about trade policy. In Michigan, 57% of Democratic voters said trade takes away U.S. jobs. Clinton lost those voters by 15 percentage points. That sentiment is unlikely to fade in Ohio, where a shuttered Ford factory greets visitors leaving the Cleveland airport, and pockets of cities look like Detroit.

Clinton’s backers are trying to beat back Sanders’ populism. “She has the best, thought-through trade and manufacturing policy,” said Brown, who is among his party’s strongest voices on trade. His endorsement of Clinton was a nod for union workers that she could be trusted.

But the same criticism that dogged her in Michigan on trade—especially over the 1994 NAFTA trade bill—followed her to Ohio. “It was 20 years ago. It was her husband,” Brown said. He shakes his head, suggesting that Clinton might have been opposed to the deal, but stayed quiet so as not to embarrass her husband, then-President Bill Clinton.

Others understand the gnashing over trade. “Secretary Clinton has waffled back and forth on the TPP. While she should not be judged by her husband’s policies, her husband was behind NAFTA and people do not forget those things,” said Capri Cafaro, a former state Senate Minority Leader and a Clinton ally.

A CNN poll released last week shows Clinton up 30 points in Ohio. But she was similar ahead in Michigan and came up short. “It’s going to be closer than anybody expects. But I think Hillary pulls it out,” Cafaro said.

Even so, some of Clinton’s supporters were far from confident. “This,” said Joe Schiavoni, the Minority Leader in Ohio’s state Senate, “is going to be a grind.”