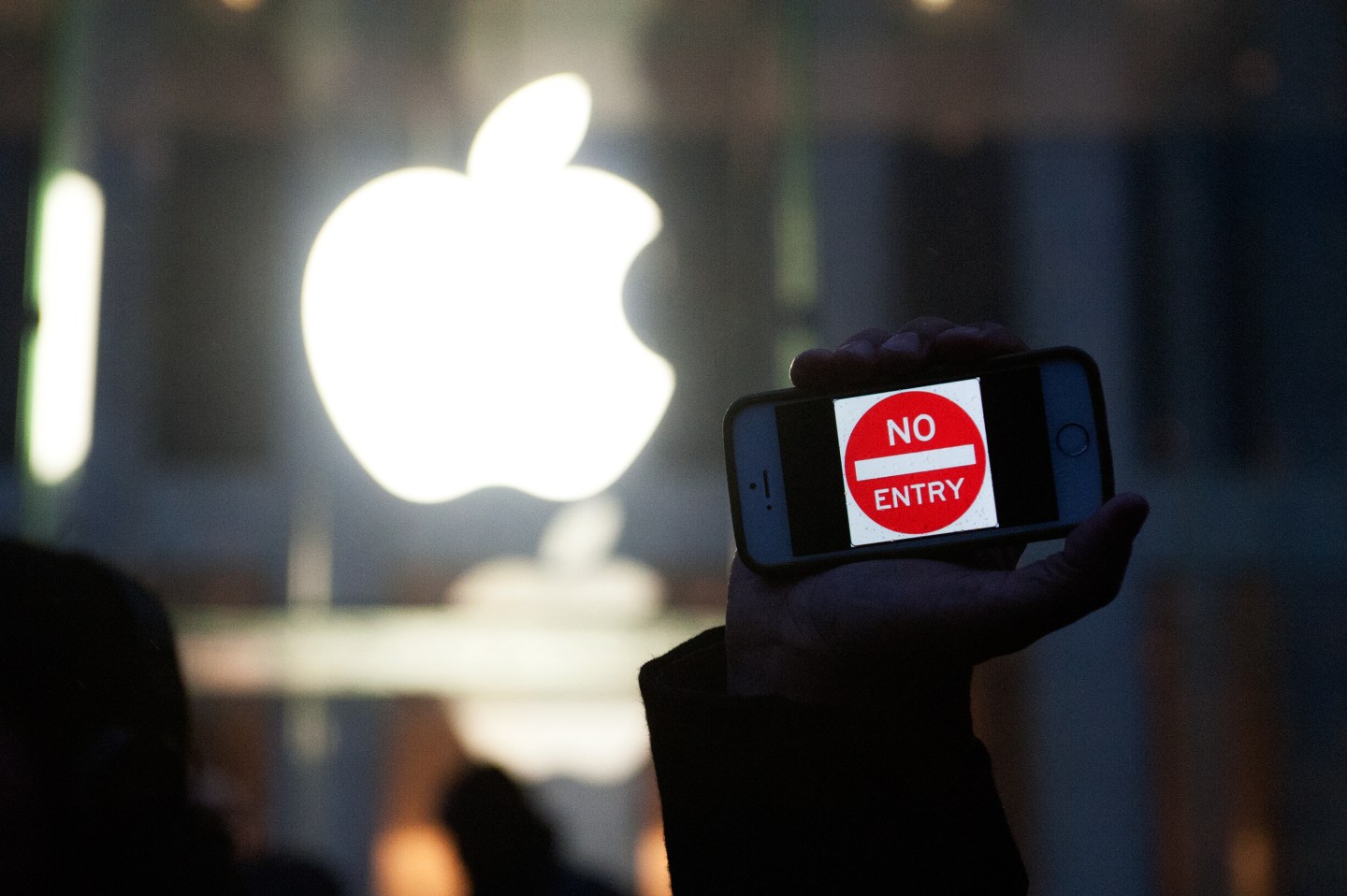 NEW YORK, NY - FEBRUARY 23: A protestor holds up an iPhone that reads, "No Entry" outside of the the Apple store on 5th Avenue on February 23, 2016 in New York City. Protestors gathered to support Apple's decision to resist the FBI's pressure to build a "backdoor" to the iPhone of Syed Rizwan, one of the two San Bernardino shooters. (Photo by Bryan Thomas/Getty Images)
Bryan Thomas—Getty Images

Updated to note other tech companies and organizations that filed joint amicus briefs backing Apple before the court’s Thursday deadline.

A coalition of 17 tech companies has filed a legal brief supporting Apple in its fight against the FBI over access to a dead terrorist’s iPhone. Many others followed suit with filings of their own.

The members of the initial set, which include many of the biggest Silicon Valley companies including eBay (EBAY), LinkedIn (LNKD), and Twitter (TWTR), submitted a joint amicus brief that argued that “the government’s investigative arm has no legal basis” to force Apple to help unlock the iPhone. They said that requiring Apple to help unlock the phone “threatens the core principles of privacy, security, and transparency that underlie the fabric of the Internet.”

The FBI wants to compel Apple to develop new software that would undermine the security protections on its phones so that investigators can access data of one of the San Bernardino shooters. Apple has refused by arguing that governments, hackers, and criminals could easily abuse such a tool.

For more on Apple versus FBI, watch:

“Asking Apple to break or weaken its security features undermines our collective trust in technology in the digital age,” Aaron Levie, co-founder and CEO of Box, said in a statement. “Instead, we need an open, public dialog focused on helping us collectively strike the right balance between privacy and security.”

Other signers of the first major corporate amicus brief includes Airbnb, Atlassian (TEAM), Automattic, CloudFlare, Github, Kickstarter, Mapbox, Medium, Meetup, Reddit, Square (SQ), Squarespace, Twilio, and Wickr. “The government’s demand here, at its core, is unbound by any legal limits,” they said. “Moreover, forcing a company to undermine its own security measures provides a powerful disincentive to invest in security: firms could have no confidence that their carefully designed security systems would not be redesigned by court order.”

The Business Software Alliance, an industry trade group that includes Oracle (ORCL), IBM (IBM), Autodesk (ADSK), and Salesforce (CRM), sided with Apple as well. A number of other trade groups and non-profit organizations are doing so, too, including the Consumer Technology Association, the Internet Association, the Internet Infrastructure Coalition, the Computer & Communications Industry Association, and the Information Technology Industry Council. (A full list of official supporters is available here.)

Briefs filed in favor of the FBI’s view have included ones from law enforcement agencies, attorney associations, and others, while telecom giants such as T-Mobile (TMUS), Sprint (S), and Verizon (VZ) have not yet clarified their positions, as USA Today reports.

As expected, many of the briefs filed in opposition to the FBI’s request take aim at the government’s use of the All Writs Act, a centuries-old search warrant law that the agency has used to justify its authority. Opponents cite a slippery slope argument, fearing that granting law enforcement the power to compel companies to undermine their security through system redesigns would be “boundless.”

“The government’s request would set a precedent that could be used in future cases to require Amici or others to provide technical assistance in a manner that undermines the very products they offer,” said the filing of which Twitter was a part. “At the very least, once Apple has written code to comply with the order, the government may seek orders to compel it to use such code over and over again.”

The FBI’s court order, the authors continue: “asks this Court to do exactly what Congress refused to do. But the Act cannot be invoked to grant the government powers Congress intentionally chose not to provide it.”

The Department of Justice did not immediately reply to Fortune’s request for comment.