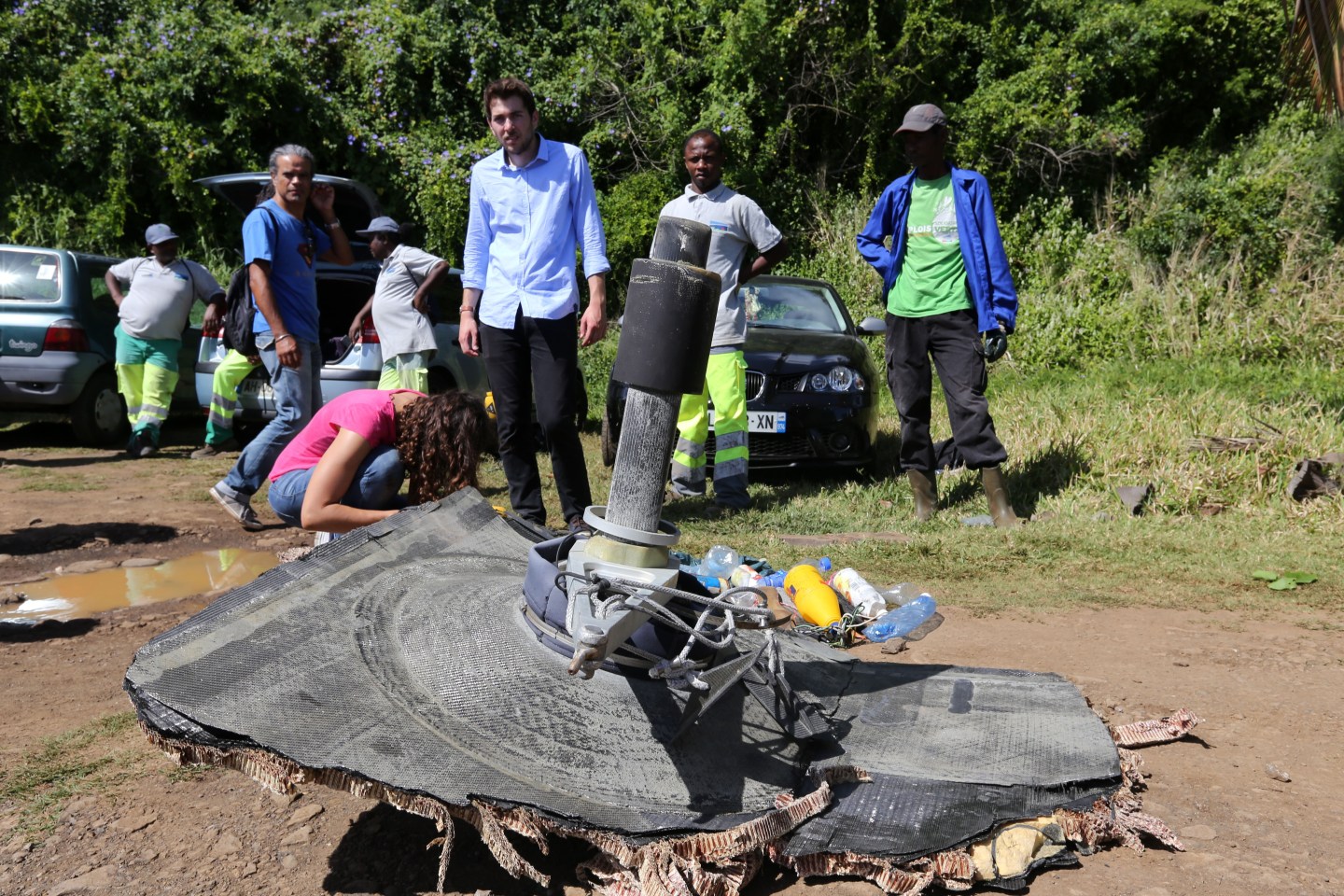 Local ecological association members and volunteers stand behind debris found on August 11, 2015 in the eastern part of Sainte-Suzanne, on France's Reunion Island in the Indian Ocean, during search operations for the missing MH370 flight conducted by French army forces and local associations. The hunt for more wreckage from the missing MH370 resumed on Reunion island on August 9 after being suspended due to bad weather, local officials said. A wing part was found on the island in late July and confirmed by the Malaysian prime minister to be part of the Boeing 777 which went missing on March 8, 2014 with 239 people onboard. AFP PHOTO / RICHARD BOUHET (Photo credit should read RICHARD BOUHET/AFP/Getty Images)
Photograph by Richard Bouhet—AFP/Getty Images

In a congressional hearing for Apple and the FBI’s fight over accessing a locked iPhone, an interesting tidbit about the still-missing Malaysia Airlines Flight 370 came up.

Apple’s (AAPL) general counsel Bruce Sewell was asked about a hypothetical: how would the company handle emergencies that involve accessing data in the phone?

The hypothetical situation put forth by Rep. Cedric Richmond, and first noted by The Verge, was if a terrorist placed information about a nuclear bomb into an iPhone and was suddenly killed. How long would it take Apple to build a piece of technology to find out more about the bomb?

Sewell answered—and you can watch his reply at the 5 hour, 1 minute and 40 second-mark here—that Apple has cooperated in previous urgent situations, including in the search for the missing Malaysia Airlines flight two years ago.

“Within one hour of that plane being declared missing, we had Apple operators cooperating with telephone providers all over the world, with the airlines [and] with the FBI to try to find a ping, to try to find some way that we could locate where that plane was,” Sewell said at the hearing.

He said the first response would be to bring together all the emergency procedures at Apple’s disposal to try and find any information that could address immediate situations.

Sewell might have been implicitly suggesting that the company would work with existing agencies and technology as its way of helping, rather than actually creating new software, which the FBI is currently asking the company to do.

It was also the analysis of satellite pings to locate the missing MH370 plane was heavily used in determining the general location of the plane in the southern Indian Ocean. However, a piece of wreckage was found over the weekend on the coast of Mozambique, which is some ways away from the search area.