How Home Depot and Lowe’s Won the Holiday Shopping Season 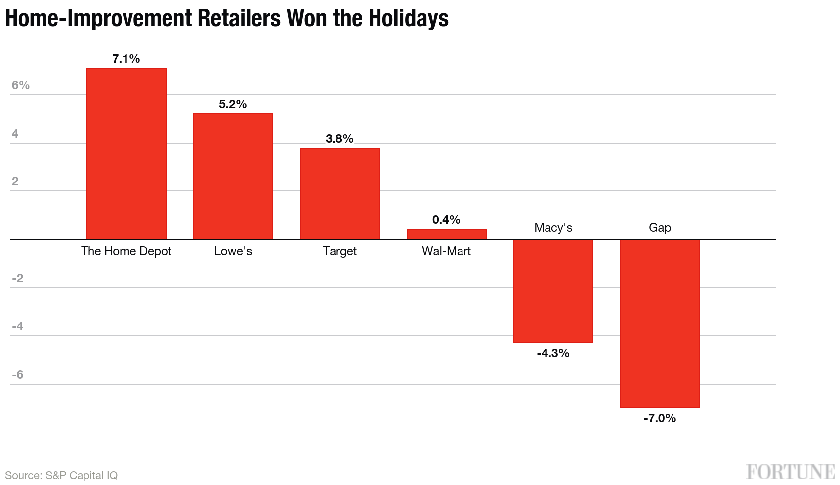 While big-box retailers like Walmart, Best Buy and Toys ‘R’ Us generate much of the attention during the holidays, the nation’s two largest home-improvement purveyors are the season’s clear winners.

Why is home improvement such a strong business, even when shoppers are supposed to care more about the latest electronics and winter sweaters? Quite simply: people are planning to spend more on their homes while keeping a lid on spending for other categories.

“The desire to invest in the home continues to grow. While most homeowners indicated their spending levels are expected to stay the same, they’re more likely to allocate funds to home improvement compared to other areas,” said Lowe’s Chief Executive Robert Niblock.

Consumers are incentivized to spend more on sprucing up their homes because the recovering housing market, as well as constrained supply, has led to home price appreciation. When the value of homes increases, consumers are more willing to open up their wallets to replace roofs, invest in fencing and siding, and renovate. A warm winter also led to increased spending for lumber and outdoor garden items. Overall, sales grew across all geographies and product categories that Home Depot and Lowe’s serves.

The strong sales from the home-improvement retailers is rewarding investors. Over the past five years, Home Depot and Lowe’s stocks have soared 233% and 163%, respectively. Target grew 44% over that period, Walmart (WMT) climbed 28% and Best Buy (BBY) dropped 7%. The broader Standard & Poor’s 500 is up 44%.

Lowe’s executives explained there are other tailwinds, including lower gas prices, job growth and income gains, that should also help propel the industry’s sales for 2016.

Executives at both retailers struck bullish tones about 2016’s sales results. Total sales growth at each company is expected to increase as much as 6%. Home Depot projected total same-store sales will rise, 3.7% to 4.5%, while Lowe’s projected 4%.