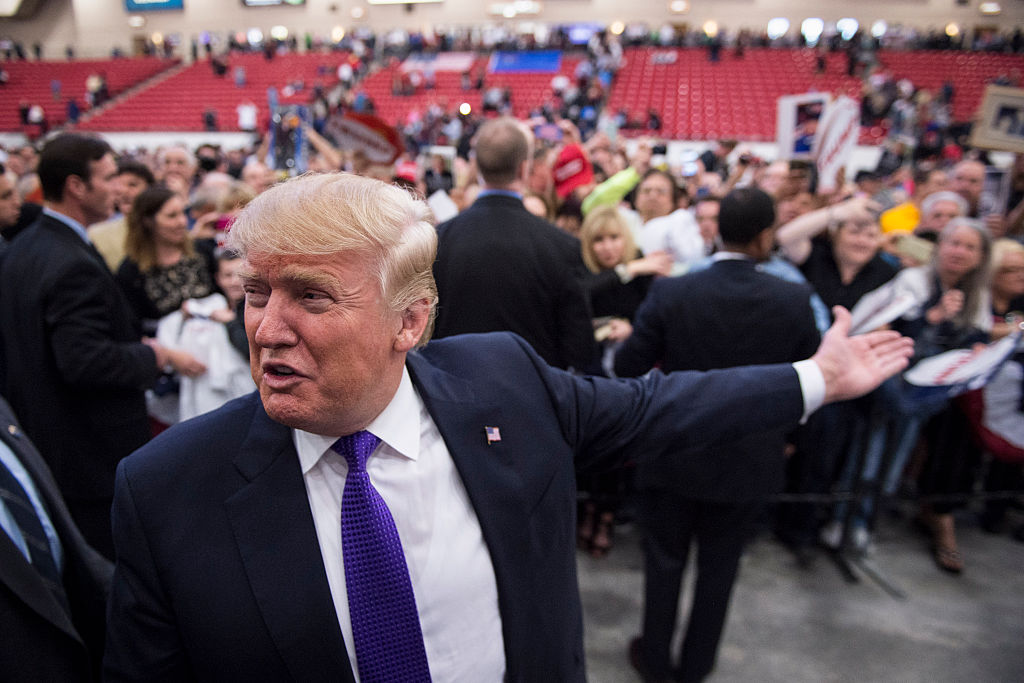 The Republicans are down to essentially a three-way race in the Nevada caucuses on Tuesday. But that doesn’t mean the GOP rivals have even odds of finishing winners in the shadows of the fabulous Las Vegas Strip.

Donald Trump, the brazen billionaire, was still the favorite to log a third consecutive win for his over-the-top campaign for President—and not just because his name is splashed across a golden tower on the famous Las Vegas Strip.

But that’s not the sole explanation. Rather, something is happening inside the Republican Party that has powered this often-profane businessman to wins in New Hampshire and South Carolina, and a surprising second in Iowa.

That leaves lesser rivals Sens. Marco Rubio of Florida and Ted Cruz of Texas trying to derail Trump elsewhere. The pair essentially tied in South Carolina on Saturday, a contest that, at least for the moment, relegated Ohio Gov. John Kasich and retired neurosurgeon Ben Carson to a second tier—and forced Jeb Bush from the race altogether.

But Tuesday’s decision among Republicans would be conducted as a caucus—and a low-turnout one at that—that is almost impossible to predict and trickier still to win. Public-polling has been rare and is notoriously unreliable in a state where just 10 to 15% of the 400,000 registered Republicans are expected to caucus.

Campaigns were careful not to set expectations too high in the volatile state. “Our hope and expectation is to do well here,” Cruz told reporters Sunday in Pahrump, Nevada. Rep. Jason Chaffetz, a Rubio ally, said his candidate need only finish in the “top three”—in what is essentially a three-man race—to claim victory.

At stake are just 30 of the 2,472 delegates who will attend the 2016 Republican National Convention in Cleveland, and they will be divided proportionally among the finishers. So far, only 102 have been awarded in Iowa, New Hampshire and South Carolina, with Trump leading with 68.

Those early states helped winnow the field of contenders such as New Jersey Gov. Chris Christie, Kentucky Sen. Rand Paul and former Arkansas Gov. Mike Huckabee. Tuesday’s results were unlikely to trim the field any more. Kasich was largely sitting out the Nevada contest, focusing on larger contests set for the coming weeks, while Carson’s phantom campaign has held only a handful of campaign events between presidential debates.

The five remaining candidates were set to meet Thursday night in Houston, a meeting ahead of the biggest day yet for Republicans: March 1, when 13 states were set to weigh-in. The Super Tuesday contest was scheduled to award 571 delegates—the biggest chunk so far.

That’s why Rubio was set to watch the Nevada caucuses from Grand Rapids, Michigan, which votes on March 8. Kasich was set to be in Georgia. Cruz and Trump were scheduled to be Nevada on caucus night, but the evening’s event was unlikely to upend a campaign that has already seen frontrunners fall, a billionaire appeal to struggling working-class voters and former Iowa winners pack their bags and exit.

That’s why, while Trump holds the best hand here on the Las Vegas Strip, no one is betting the house that this contest is over. Politics doesn’t follow the same rules as poker, and voters have shown this year that odds are not predictive.