Inside the Ugly Battle Between Kesha, Sony and Dr. Luke 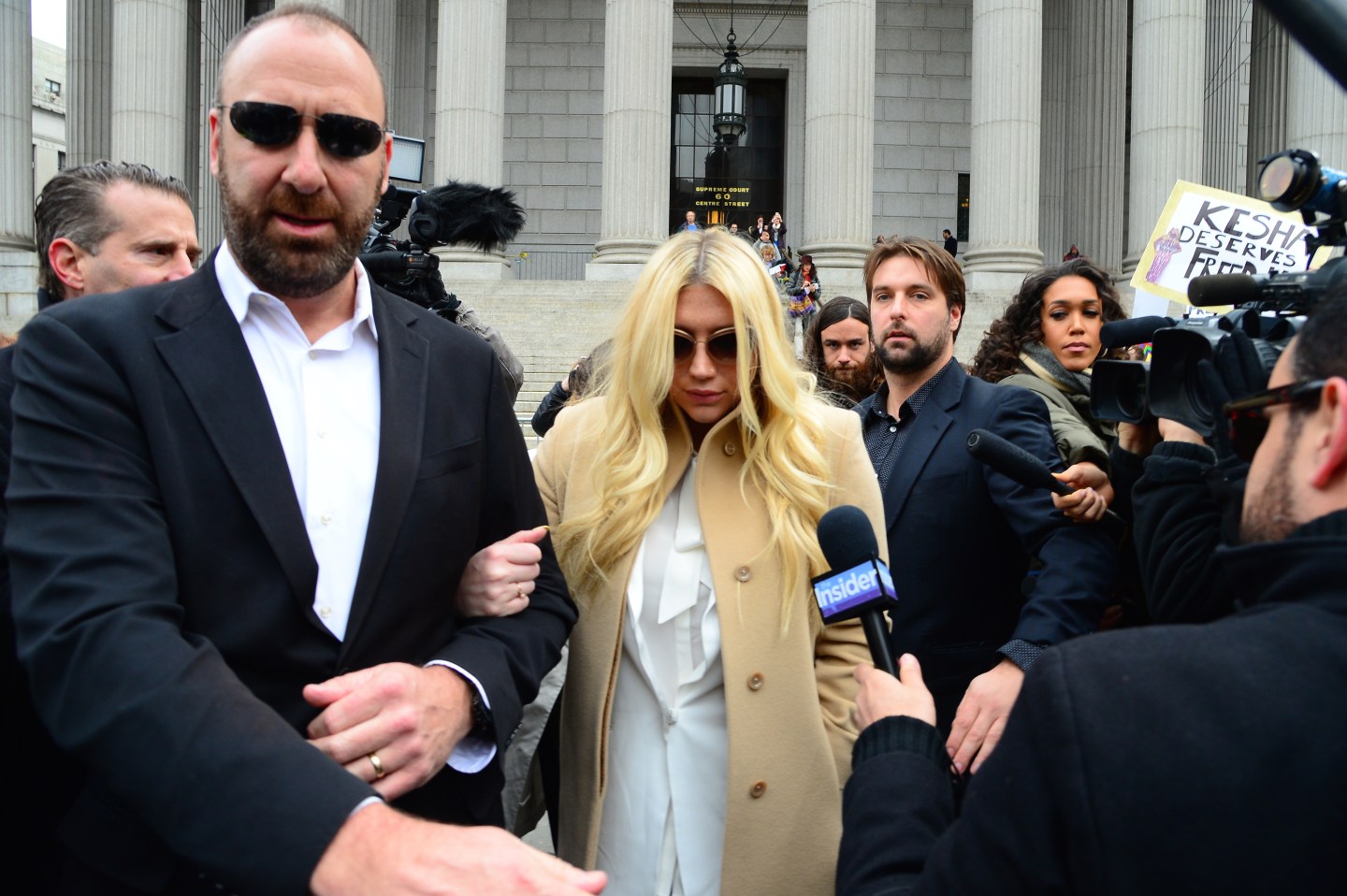 A long-running music industry legal battle has been picking up steam in recent months and, on Monday, it culminated in a tweetstorm by veteran music producer Dr. Luke.

We’re talking about pop singer Kesha’s bitter legal fight with her former producer and mentor, Dr. Luke, and his Kemosabe Records label, which is part of Sony’s (SNE) U.S. music unit. Kesha Sebert (formerly known as Ke$ha) is currently suing Lukasz Gottwald (Dr. Luke’s real name) and the record label in an attempt to escape her recording contract. The singer of hits such as “TiK ToK” and “Die Young has accused Dr. Luke of sexual and emotional abuse, including drugging and raping her. Dr. Luke has consistently denied all the charges and hasn’t been charged criminally. Sony declined to comment.

On Monday afternoon, Gottwald went on a tweeting spree in which he decried the “speculation” he’s seen online from Kesha’s supporters. Here is a sampling from the producer’s Twitter rant:

Until now I haven’t commented on the lawsuits, which should be resolved in court not here on Twitter.

It’s a shame that there’s so much speculation out there basing itself on so little information.

I understand why people without all the information are speaking out. I can appreciate their compassion.

But lives can get ruined when there’s a rush to judgment before all the facts come out. Look what happened at UVA, Duke etc.

of course any sane person is against rape and sexual assault but everybody who is commenting is doing so without knowledge or facts.

Over the weekend, joining the #FreeKesha social media campaign, Taylor Swift, along with several female pop stars, including Lady Gaga, Miley Cyrus and Ariana Grande, have tweeted their support for Kesha. Swift also donated $250,000 to the singer’s legal efforts, days after a New York Supreme Court judge ruled that the singer couldn’t record a new album outside of her current contract while this case is playing out.

Here’s some background on the years-long legal battle between Kesha and Gottwald.

How the battle began

Kesha signed a six-album contract with Gottwald’s Kemosabe Records, which is housed within Sony Music Entertainment, in 2005 when she was 18-years-old. Under that contract, the singer released the 2010 album Animal—which topped the charts with more than 150,000 copies sold in its first week and a then-record 610,000 digital downloads for the song “TiK ToK.” Her most recent album, 2012’s Warrior, did not fare as well, failing to crack the Billboard Top 5 upon its release.

In 2013, Kesha’s fans started an online petition to free the singer from her recording contract, claiming that Gottwald had too much control over her career and was stunting her creatively. That same year, Kesha collaborated with Pitbull on the hit song “Timber,” which Gottwald produced.

Kesha filed her lawsuit against Gottwald and Kemosabe Records in 2014, with the singer claiming that her former producer “sexually, physically, verbally and emotionally abused” her over the course of several years. According to The Hollywood Reporter, the singer’s claims include allegations that Gottwald drugged and raped her at some point in the early stages of her recording contract, and Kesha’s lawyers have argued that her career will be irreparably damaged unless the court releases her from the contract so that she can record new music without Gottwald’s involvement.

Sony Music Entertainment has maintained that Kesha is allowed under her contract to record music with the company without Gottwald’s involvement, though Kesha lawyer Mark Geragos has referred to that claim as an “illusory promise.” The singer argued that the recording company might not fully promote any new music she records due to the nasty legal fight, though Gottwald’s lawyer, Christine Lepera, has countered that Sony Music has already spent roughly $11 million promoting the singer’s music.

“Kesha is already ‘free’ to record and release music without working with Dr. Luke as a producer if she doesn’t want to. Any claim that she isn’t ‘free’ is a myth,” Lepera said in a statement. (Lepera also noted the fact that, as part of a separate lawsuit, Kesha actually swore under oath in 2011 that she was never assaulted by Gottwald, though Kesha’s lawyer has claimed that her previous statements were made under duress, following alleged threats from Gottwald.)

Earlier this month, New York Supreme Court Justice Shirley Kornreich threw out a Gottwald claim alleging that Kesha’s mother, Pebe Sebert, and manager, Jack Rovner, had strong-armed the singer into demanding release from her contract and publicly smearing Gottwald with her abuse claims.

On Friday, Kornreich declined a motion from Kesha’s lawyers to release the singer from her current contract while the larger case is being decided. “You’re asking the court to decimate a contract that was heavily negotiated and typical for the industry,” the judge said of her decision in court last week. Kornreich added that the lack of physical evidence to support Kesha’s assault claims gave her pause, preventing her from taking “the extraordinary measure of granting an injunction.”

However, Kornreich did not rule on Gottwald’s motion to dismiss Kesha’s lawsuit, or on a motion by Kesha’s lawyers to dismiss Gottwald’s own claims against the singer, which include defamation and breach of contract. THR notes that the judge will push back that decision in order to give Kesha’s lawyers more time to adjust their counterclaims.

Swift said through a spokeswoman on Sunday that her large donation is meant to help Kesha “with any of her financial needs during this trying time.” Following Swift’s announcement, Kesha’s mother took to Twitter (TWTR) to thank the pop star for the donation and the support:

A persons wealth is not measured by what they have but by WHO they they help with it. And Taylor Swift is is a truly RICH PERSON.
Thank you🌹

Meanwhile, a handful of other music industry celebrities have also spoken out about the case, with some offering their support to Kesha.

There are people all over the world who love you @KeshaRose. And I can say truly I am in awe of your bravery.

Trying 2 not say anything since I can't say anything nice about a person… so this is me not talking about Dr. Luke https://t.co/lLhtUHbmgG

hey @kesharose — don't know what the legal specifics are, but if you want to make something together & then leak it for everyone I'm around

Both sides now await Kornreich’s ruling on their respective motions to dismiss claims in the ongoing legal battle. Meanwhile, a fan-created petition on Change.org titled “Urge Sony Music to Release Kesha from her Contract with Kemosabe Records” was just a few hundred signatures short of its goal of 25,000 as of Monday afternoon.

This story was updated to include Dr. Luke’s tweets.