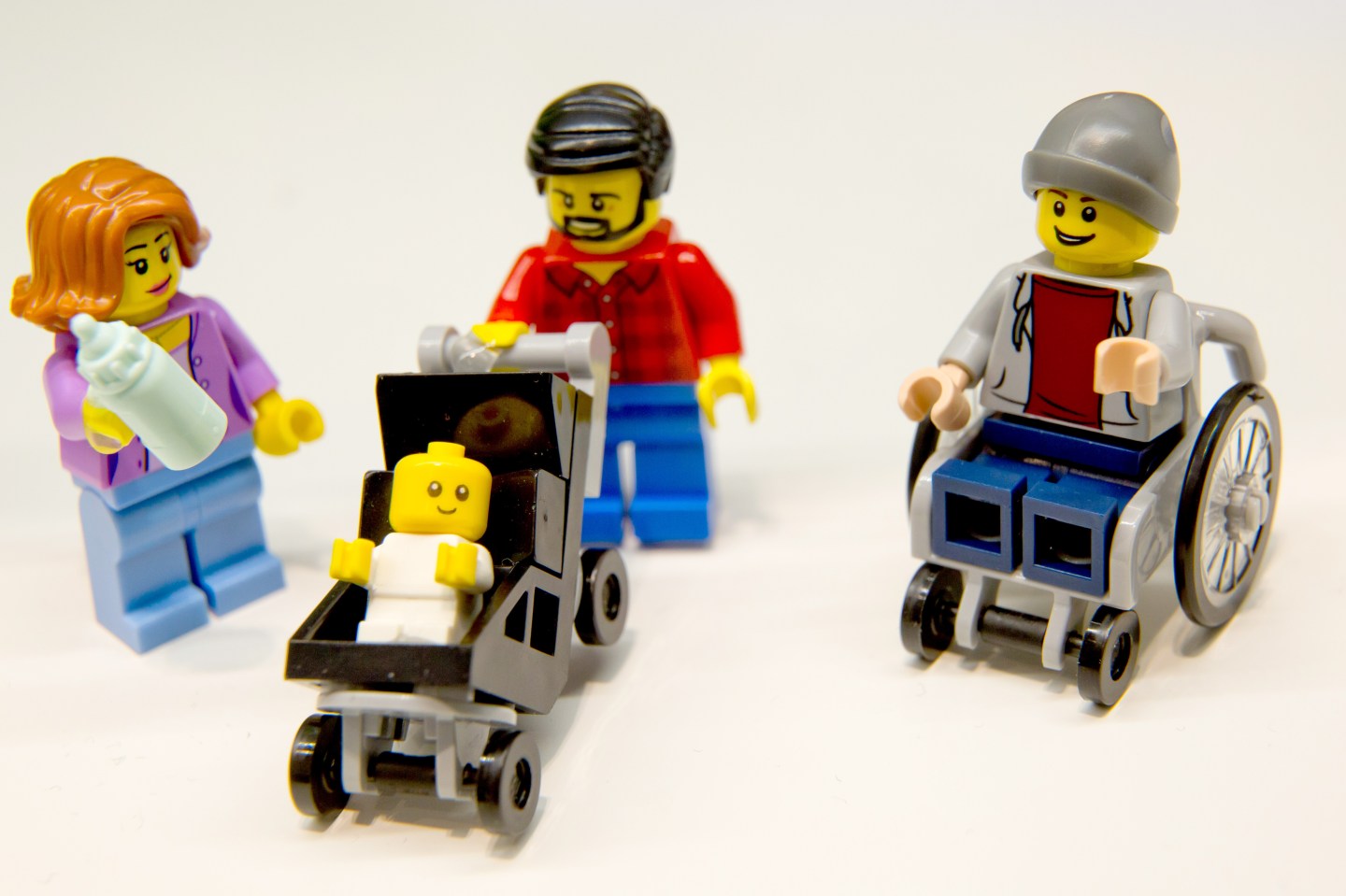 Lego figurines, including one in a wheelchair are pictured at the Lego booth on January 28, 2016 in Nuernberg during the 67th International Toy Fair. / AFP / dpa / Daniel Karmann / Germany OUT (Photo credit should read DANIEL KARMANN/AFP/Getty Images)
Photograph by Daniel Karmann — AFP/Getty Images

Lego has maintained over a decade of successful sales growth in the United States market by focusing on a key category of the toy aisle that it dominates: construction sets.

Most of the success can be attributed to a mix of licensed gear from hot properties like Star Wars, The Avengers and Batman, as well as internally developed lines like the female-focused Lego Friends and the Lego City themes. Ahead of New York’s toy fair, the company reported U.S. sales jumped 11% in 2015, the 11th consecutive year of growth in the market as it also gained share in the toy aisle.

But there’s another opportunity to boost the brand’s well established equity with parents and kids. Lego sees a future in digital too.

“You can’t create an attractive property for children without playing in the digital space,” Soren Torp Laursen, president of LEGO Systems, told Fortune at Lego’s booth at the toy industry’s most important display event to media and retail clients. “So pretty much everything we do has a digital connotation to it.”

A big initiative in this digital category is Lego’s new internally developed Nexo Knights line, which is a theme focused on a medieval kingdom set in a futuristic world. The digital connection is the ability to scan knight shields from the physical toy sets using a mobile device and being able to “download” the powers assigned to those shields and use them in Lego app game.

Lego first began to stock Nexo Knights sets at the beginning of the year and it will be a big focus for the Danish toy company. The app debuted late last year and is already available for download via several platforms, including Apple’s App Store and Samsung Apps.

Heading into this year’s New York City Toy Fair, the company says it is also hearing positive feedback via social channels for some new “minifigures” that signal a more inclusive view of the world today. Within the Lego City line, the toy maker has constructed a kid in a wheelchair with a guide dog for the first time ever. A stay-at-home dad (while his Lego wife minifigure is depicted in a work outfit) is also a first. Those figures “mirror the world we live in today,” Lego says. That’s true: as Pew Research Center data indicates, there are a rising number of stay-at-home dads today.

Lego has a lot of opportunity to play with diversity in the line of minifigures that it sells. Those figures don’t come with as much social baggage as say, a Barbie doll, which is also going through some major physical changes. Lego’s minifigures, which have been on the market for 38 years now, have been viewed as a more neutral character that features a lot of customization options.

There has been some criticism in the past in regards to how Lego has tackled gender. A few years ago when it debuted the Lego Friends line, some were critical of the use of pink and purple blocks, as well as sets that featured themes that some thought were too stereotypical for girls (play sets featuring hair salons and pop star stages). Some sets this year prompted more physical themes, including camping and archery.

Lego, however, has said that before it began to court girls more aggressively with themes like Lego Friends, it sold very few sets to girls. The success of those themes has led more gender-neutral sets to be sold to girls, giving the toy maker a greater balance in terms of sales between the genders. Social media has elevated the risks and rewards of those social conversations.

To Lego, changes in how the brand evolves are part of being a responsible corporate citizen. Consumers are demanding more, and the toy company says it is fine with that.

“We are all part of the same world and we need to portray that to the best of our abilities,” Laursen said.