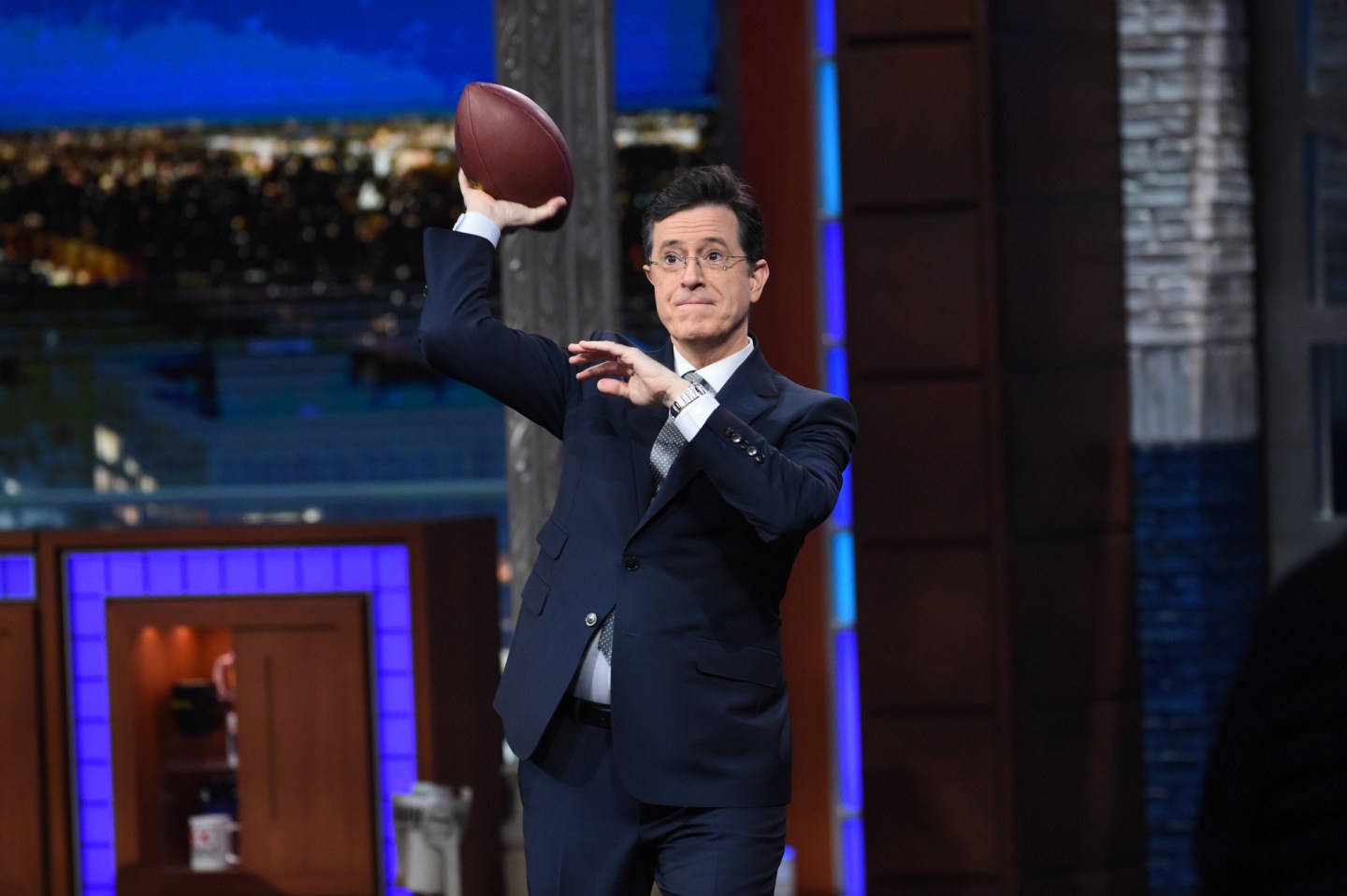 CBS pulled out all of the stops in the hopes of attracting huge television ratings for the network’s star-studded Sunday night event.

We’re not talking about Super Bowl 50—the big game was the third-most-watched Super Bowl in history, falling short of the previous two years with just under 112 million viewers. After the Denver Broncos wrapped up another title, late-night comedian Stephen Colbert welcomed actors Will Ferrell, Tina Fey, and Margot Robbie, as well as Fox News anchor Megyn Kelly among others (including a pre-taped segment with President Barack Obama) to his live version of The Late Show on CBS (CBS) that aired immediately after Super Bowl 50.

That list of big names helped Colbert—who also scored a live interview via satellite with the Broncos’ Super Bowl MVP, Von Miller—pull in what were easily The Late Show‘s best television ratings under either Colbert, or his predecessor David Letterman. Last night’s show attracted an average audience of 21.1 million viewers, according to Nielsen’s early ratings, which blows Colbert’s average Late Show audience of around 3 million viewers out of the water. The post-Super Bowl bump even extended to The Late Late Show with James Corden, which also aired a special live show that aired right after Colbert to the tune of a franchise high 5 million viewers.

Colbert’s previous record-high in television ratings came with his September debut—his first show after taking over for the retired Letterman—when he pulled in more than 6.5 million viewers. (More than 13.7 million viewers tuned in to watch Letterman’s final show last May, which was his biggest audience since a post-Olympics airing in 1994 attracted more than 14 million.)

It’s no surprise that last night’s live show earned a major ratings boost for Colbert, as it came in one of the most high-profile time slots of the year. Super Bowl-hosting networks regularly use the post-game lead-out slot to shine a spotlight on programs that are looking to build an audience and could use a ratings jumpstart.

And, unfortunately for both Colbert and Corden, recent history would suggest that the post-Super Bowl ratings bump is likely temporary and that those many millions of extra viewers won’t necessarily stick around beyond the next few weeks. According to TV by the Numbers, Super Bowl lead-out shows in seven years out of the past 10 saw a major initial spike in their ratings only to watch those viewers dwindle back down to normal levels after one or two weeks.

Of course, one thing to keep in mind is that most of the immediate lead-out shows in past years have been programs that air once weekly, whereas The Late Show airs every weekday night. That means we’ll be able to see each day this week just how much of that post-Super Bowl audience Colbert can sustain.

Any sort of sustained bump would be big news for Colbert and CBS in their ongoing battle for viewers with Comcast’s (CMCSA) NBC and The Tonight Show Starring Jimmy Fallon. Since Colbert took over CBS’ late-night mantel from David Letterman in September, Colbert (like Letterman before him) has put up solid ratings that still leave him firmly in second place behind NBC and Fallon, whose show has recently averaged roughly 3.9 million viewers per night (and just ahead of Walt Disney’s (DIS) ABC with Jimmy Kimmel Live at about 2.5 million average viewers).

As Fortune has noted in the past, the battle for late-night ratings is an important one, with advertising spending on network late-night talk shows hitting almost $600 million in 2014. And, Fallon and NBC are no strangers to piggybacking on the Super Bowl’s ratings, as NBC aired special Sunday-night versions of Fallon’s show in both 2012 and 2015, though the late-night show followed other network shows in the immediate lead-out slot in both years (The Voice in 2012, and The Blacklist last year).