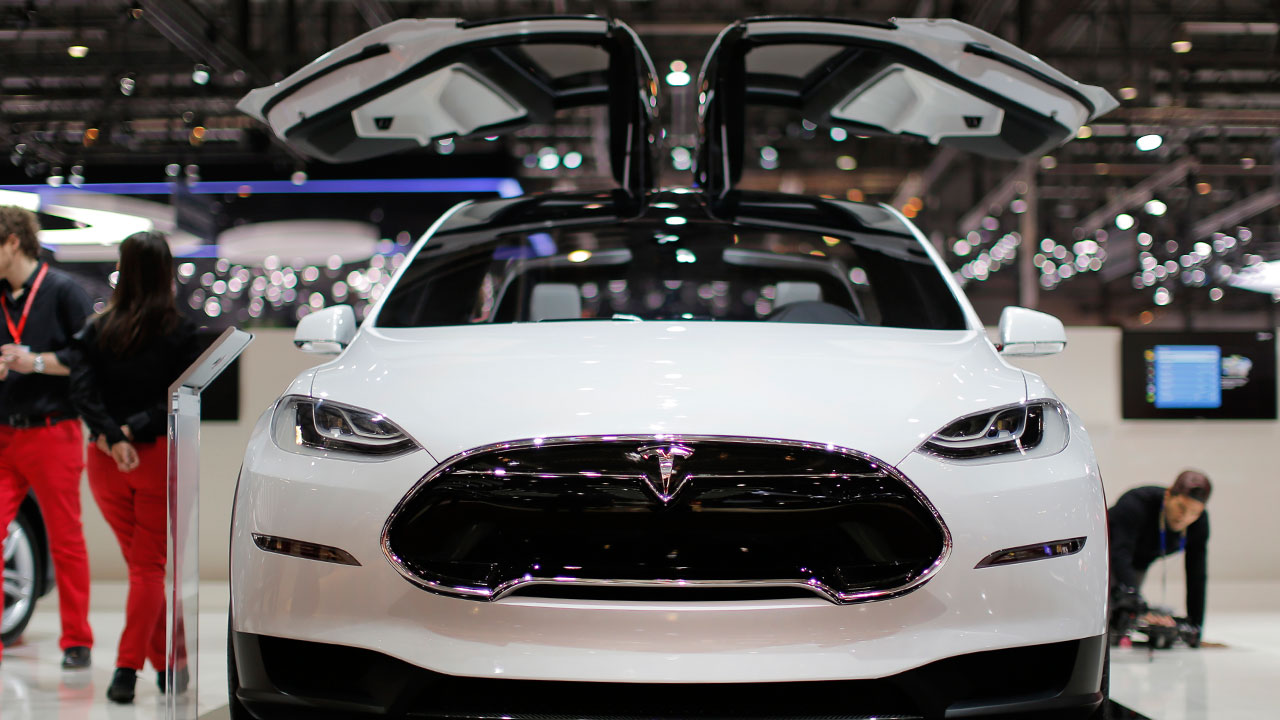 Shares in electric car maker Tesla have slid to a two-year low and are close to trading at half the price they did at their peak in 2014.

The dip comes less than a week before Tesla announces its latest earnings and reveals the progress it’s made on shipping its new Model X SUV, building its massive Nevada battery factory, and producing its new power grid battery.

In just the latest week, investors hammered the company’s stock. On Tuesday, its shares dropped about 5%. On Wednesday, they fell another 5.5%. On Friday, Tesla’s stock tumbled more than 7% to $162.60 after being down as much as 9% earlier in the day.

This reversal is all the more remarkable because, in late 2014, it looked like Tesla would break through the $300 per share ceiling. In fact, investors have soured on the company.

In recent days, a handful of analysts have lowered their stock price projections for Tesla (TSLA). The week kicked off with Morgan Stanley’s Adam Jonas, a longtime Tesla cheerleader, downgrading his price target for Tesla’s stock from $450 to $333 per share. Berenberg analyst Adam Hull then slapped a rare sell rating on the company and a price target of $165 per share. Meanwhile, analysts at Pacific Crest lowered their expectations because they believe Tesla’s production of its new SUV, the Model X, is slower than expected.

Indeed, concerns about Tesla’s slow Model X production are a common theme among investors. Last month, the company’s shares dropped over 8% in just one day after it revealed that it had only shipped 208 Model Xs, a car plagued with delays that left customers waiting for years.

Tesla began delivering the very first Model X cars to a half dozen customers in September, over three years after the company had initially shown off the car publicly.

One of the reasons for the delay was the car’s swooping doors. They were such a problem that Tesla has sued a German company contracted to make the doors, but which ultimately unable to do so, causing Tesla to scramble for a new supplier.

Will Tesla’s new Model X be a hit?

Now Tesla says it expects to increase Model X production to 238 cars per week this year. When Tesla ramps up production of the Model X, the company’s margin made per car will also rise.

But if shipments don’t ramp up considerably, customers, who have been generally loyal and patient with the company may grow concerned.

Tesla is trying to lift production of the Model X at the same time that it’s boosting production of its flagship car, the Model S electric sedan. The dual factory efforts are so complicated that Tesla had lowered its annual car shipment guidance for 2015. Earlier this year, Tesla said it had hit the low range of the lowered car shipment numbers and had delivered 50,580 cars for the year.

The Model S has been a resounding success, and has partly enabled Tesla to fund its future projects like its big battery factory near Reno, the development of a lower cost Model 3 car, and creation of a battery that plugs into the power grid and can be paired with solar panels. But Tesla has also borrowed heavily to fund those efforts, and next week analysts will be watching to see how much the company expects to spend in 2016.

GM says the Bolt will get 200 miles on a single charge and cost around $30,000. That could make it direct competitor with Tesla’s upcoming Model 3.

Sign up for Data Sheet, the tech industry’s daily newsletter.

But Tesla has a long history of missing its promised launch dates. If the Model 3 is delayed considerably, it would add to the pressure on its shares.

In addition to punishing Tesla for its internal growing pains, investors slammed a number of tech stocks this week, indicating that the tech industry’s lofty valuations of the past couple of years are no longer unsustainable. Tesla is commonly seen as both a tech stock and an auto stock.

In addition, the recent rock bottom oil prices have boosted U.S. sales of conventional trucks and large cars while curbing electric car sales. Musk has said he expects low oil prices to prompt consumers to slow their purchasing of electric cars, but he says he doesn’t think Tesla, and its premium cars, will feel the brunt of the change in behavior.

Over the long term, Wall Street has started to realize that Tesla is actually a high risk company. In recent years, its valuation has been so high at times that even Tesla CEO Elon Musk has said it’s been over-inflated.

But its risks are very real. To make the Model 3 at the low price it wants, Tesla must build its battery factory outside of Reno that costs billions of dollars. It’s only through the very large, and very low cost battery production at the so-called “Gigafactory” that Tesla can hope to make a $35,000 car with a driving range in line with its previous cars.

It’s a like a carefully coordinated high wire act on a world stage. To meet all of Tesla’s launch dates on time and on budget, everything has to be perfectly coordinated. That investors have only more recently started to realize this is the surprising part.

Next week when Tesla reveals its fourth quarter earnings, all eyes will be on the Model X. But also listen closely for whether Tesla’s gives any updates about the Gigafactory, or its new grid battery line, and any hints about the future of the Model 3.

The Model 3 has always been Musk’s long term goal, to make a mass market, popular electric car. The rest of it—which has taken 13 years to date—has been a way to get there.