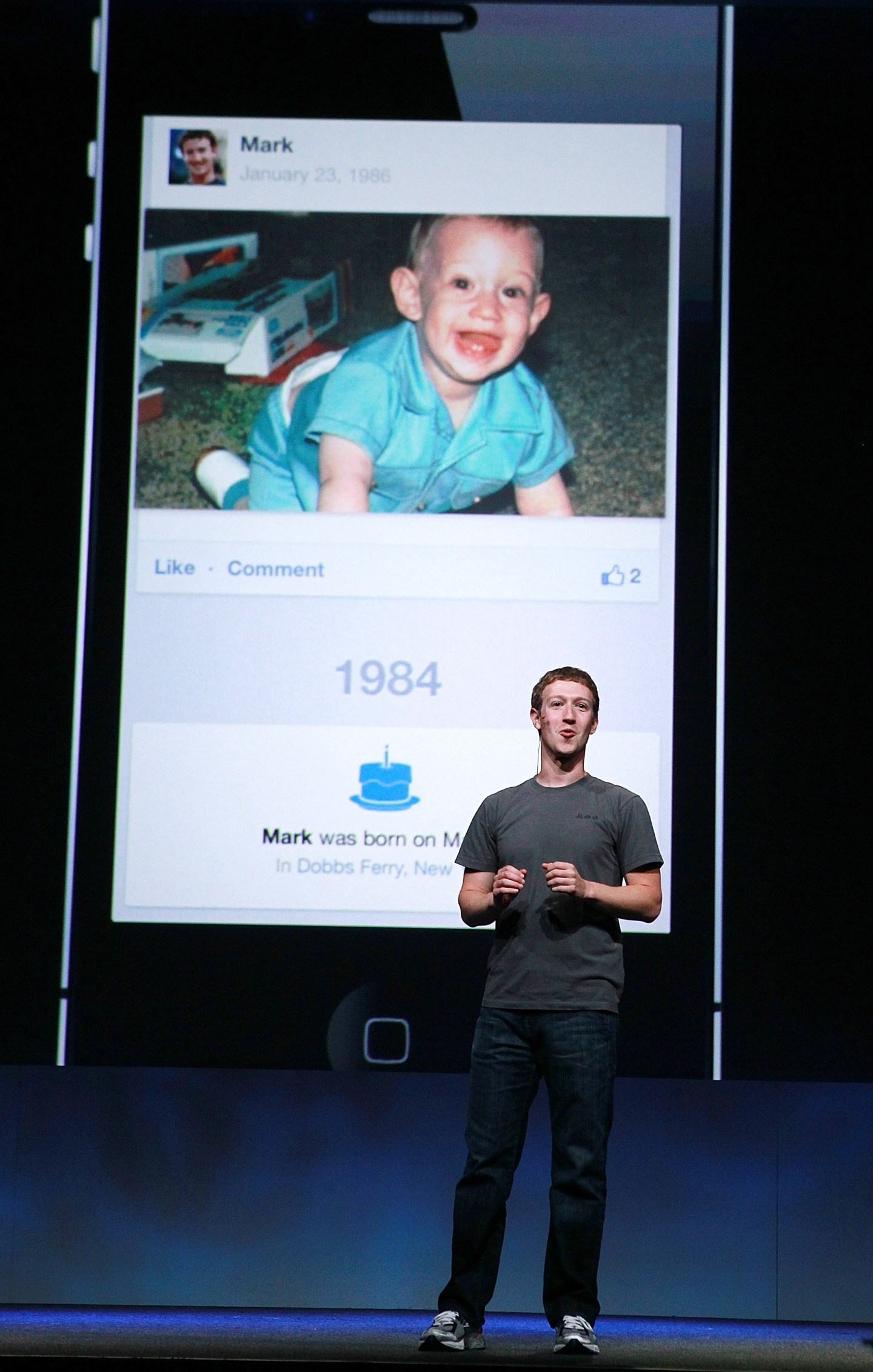 Facebook CEO Mark Zuckerberg shows a photo of himself as a baby as he delivers a keynote address during the Facebook f8 conference on September 22, 2011 in San Francisco, California. Facebook CEO Mark Zuckerberg kicked off the conference introducing a Timeline feature to the popular social network. (Photo by Justin Sullivan/Getty Images)
Photograph by Justin Sullivan — Getty Images

It could have been just another cute baby photo on Facebook—an infant girl sitting in her pediatrician’s office. What made it different was who was holding her: Facebook CEO Mark Zuckerberg. “Doctor’s visit—time for vaccines!” he posted on his public page.

Predictably, the small but vocal faction of anti-vaccine types posted and protested. The photo now has 77,000-plus comments. But what was truly interesting went unremarked: It’s that a male CEO of a huge company was sitting in a pediatrician’s office with his child. It’s the sort of thing male executives are presumed to have other people do (like their wives).

It’s not the first time Zuckerberg has been public about his and wife Priscilla Chan’s parenting journey. From the July pregnancy announcement (in which they discussed suffering multiple previous miscarriages), to his decision to take 2 months of paternity leave (and post on Facebook about what he’ll wear his first day back) he is becoming a public Parent-in-Chief.

Is this just because Facebook (FB) is all about over-sharing the details of one’s personal life, or is there something new going on with how public men are about their parental role?

Zuckerberg is much younger than most CEOs (he’s 31). Few men or women are raising babies when they reach the upper echelons of corporate life. But Zuckerberg certainly fits in with his millennial brethren. Josh Levs, author of All In: How Our Work-First Culture Fails Dads, Families, and Businesses—and How We Can Fix It Together, says that “We’re in this new era now, where men are saying in a public way, ‘If you are a dad, than being a committed and involved dad is the manliest thing you will ever do.’”

It’s a departure from the past, and even from what many men currently experience. Levs, a former CNN correspondent, filed a charge with the Equal Employment Opportunity Commission against his former employer after being denied 10 weeks of paid leave that mothers were given and adoptive parents (of either gender) received. At that time, biological fathers received two weeks paid leave. The case has since been settled. (CNN’s new policy gives six weeks of paid caregiving leave to all new parents.)

In numerous companies, men are penalized for following policies that are on the books. They may be offered two weeks of paternity leave, but “Everybody knows you’re not supposed to take it,” Levs says. So when Mark Zuckerberg says he’s taking 2 months off, “it sends a signal to every man at Facebook that it’s perfectly fine to take that much time,” he says. When a total alpha-male shows up in the pediatrician’s office, it shows that manly men can do that. “It’s a form of bullying to maintain an old perspective of what it is to be a man, and to tell other men that’s the only way to be a man,” says Levs. “The only way to tackle these stigmas is top-down.”

Being public about your private life has upsides

Wharton professor Stewart Friedman, author of Total Leadership, and several books on combining work and life, says that bringing your whole self to situations means “other people see you as a person just like them, and they trust you more.” They can see “where you’re going and where you want them to go.” There’s also a recruiting benefit. Friedman says Zuckerberg is showing “This is a cool place to work, dads and moms. We respect the fact that people can become parents,” and that’s “an important part of what we stand for as a company.”

In the hew and cry over little Max Zuckerberg’s vaccines, we even saw a glimpse of what female executives have long endured: intense judgement over all aspects of their lives.

There’s plenty of evidence that women leaders endure much scrutiny. Liz Mulligan-Ferry, director of research at Catalyst, says that studies find people view women leaders as “too soft or too tough. It’s never just right.” She calls it “kind of the Goldilocks syndrome.”

Also, “Women are often perceived as being competent leaders or likable leaders, but rarely both at the same time.” This double-bind makes it hard to do anything without criticism. Yahoo! CEO Marissa Mayer (YHOO) took a relatively short maternity leave after having twins this fall. She was criticized for sending a bad message and (generally unspoken, but there) being a bad mom. If she’d taken 4 months off, though, she would have been viewed as an uncommitted CEO during a tough patch for the company.

“If a man CEO wasn’t taking much leave when his wife had twins, it probably wouldn’t make the news at all,” says Mulligan-Ferry. If Zuckerberg had gone back to work 2 days after Max arrived, no one would have said a thing. Men do not face the double bind.

They also, currently, have a choice about how public to be with their family lives. “Men who are watched as high-profile working dads have chosen to place themselves actively in the conversation while female leaders get scrutinized for their actions as working moms no matter what they do,” says Jennifer Owens, editorial director of Working Mother magazine.

“We’re such a long way from it being fair,” says Friedman.

That said, as Zuckerberg returns from his paternity leave today, January 25, it’s clear he is changing the discussion. Says Owens, “I do appreciate the way he’s using his notoriety (and social media platform) to showcase his take on working dadhood. It helps a lot with the overall conversation regarding work and parenting.”

Laura Vanderkam is the author of I Know How She Does It: How Successful Women Make The Most Of Their Time (Portfolio), a book based on time diaries of 1001 days in the lives of professional women and their families.

Editor’s note: This story was updated on January 25 to include Zuckerberg’s latest Facebook post, in which he made a joke about his return from paternity leave. “First day back after paternity leave. What should I wear?” he wrote, over a photo of his closet showing a sea of identical gray shirts and sweaters.