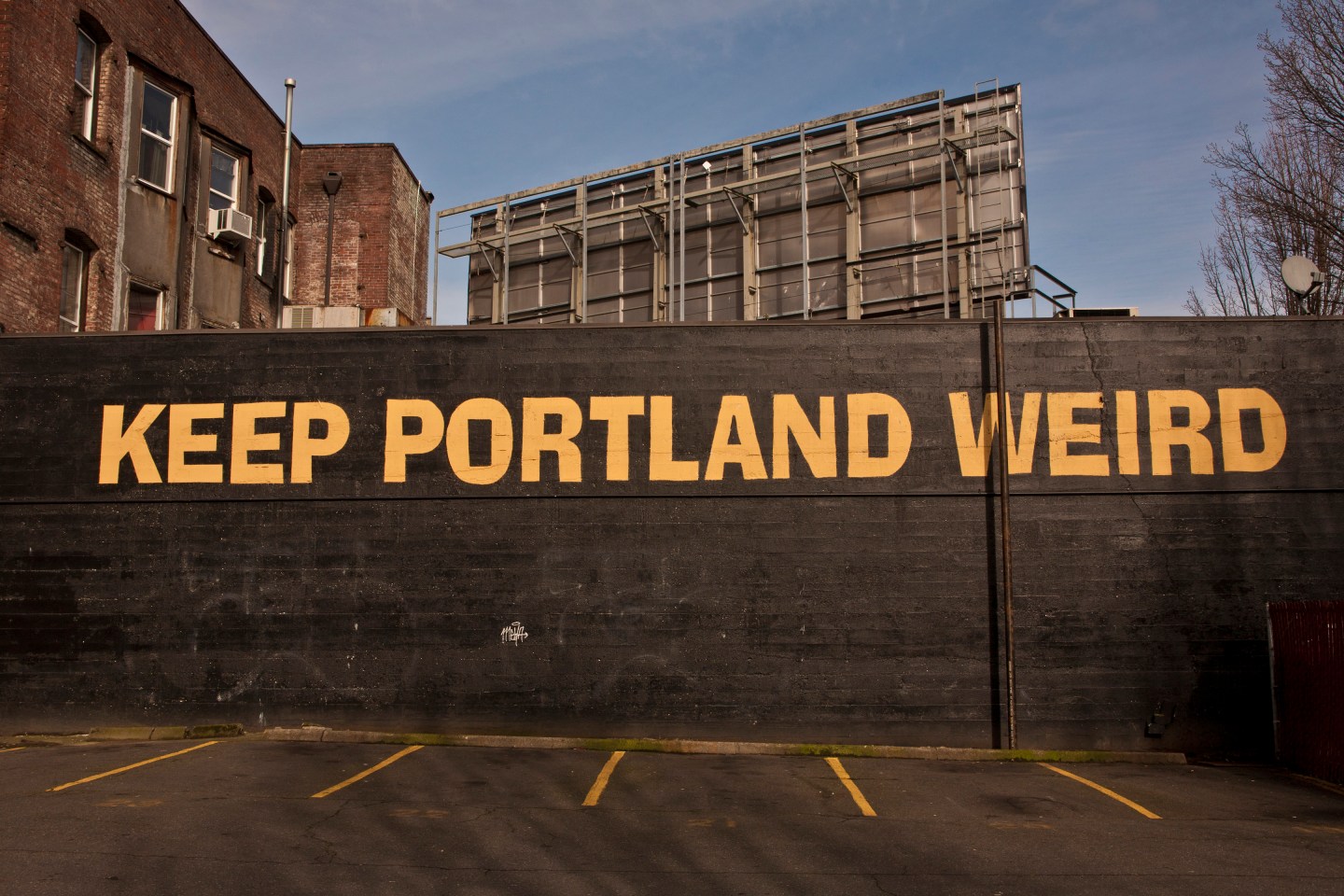 PORTLAND, OR - FEBRUARY 11: The "Keep Portland Weird" sign is viewed on February 11, 2012, in Portland, Oregon. Portland has embraced its national reputation as a city inhabited with weird, independent people, as underscored by the dark comedy of the IFC TV show "Portlandia." (Photo by George Rose/Getty Images)
George Rose Getty Images

The proposal was prompted, in part, by a ballot initiative to put a statewide $15 minimum wage to a vote in November 2016. Brown’s two-tiered hike, which could preempt the ballot effort, appeases wage advocates and labor unions in Portland while acknowledging that many rural areas in the state are still hurting from the recession. In announcing her plan, Brown said in a statement that it “establishes a higher minimum wage in the Portland metropolitan area, where the economy is growing faster and has traditionally been stronger, than in the rest of the state.”

New York used a similar approach when it implemented its wage hike for fast-food workers, requiring franchised restaurants in New York City to raise their hourly wage to $15 by the end of 2018, while giving the rest of the state until 2021 to reach that threshold.

The cost-of-living differences between cities and rural areas—or even the disparity in costs from one metro area to another—is an obvious hurdle in the push for statewide minimum wage proposals, such as the one New York Governor Andrew Cuomo introduced in September. Lawmakers, especially those representing constituents who live outside urban hubs, argue that minimum wage increases are harder for rural businesses to absorb and they often balk at blanket hikes.

Then again, the cost of living has always differed based on geography and states have managed to pass universal wage hikes in the past. Why is it such a big deal now?

Wage hikes that became law prior to the present-day Fight for $15 era were more incremental and a matter of legislative “horse trading,” says David Cooper, an economic analyst at the Economic Policy Institute. But because the value of the federal minimum wage has eroded so much—it’s been $7.25 since 2009— recent efforts to increase minimum wages at the local, state, and federal levels have focused more on what a worker needs to earn to live comfortably in a certain geographic area. That—along with the attention given to the United States’ vast income inequality—has made the cost of living a more prominent talking point in legislative negotiations and among worker advocates, Cooper says.

That doesn’t mean that a statewide $15 minimum wage is impossible. It just means that if it occurs, it’ll likely mirror Brown’s proposal on Thursday and take a tiered approach to reaching that rate. Indeed, Cuomo’s proposal for an all-industry, statewide $15 minimum wage calls for the hike to take place more rapidly in New York City and at a slower pace for the rest of the state.

Exceptions to the tiered model could pop up if a state avoids the legislative process and instead introduces a ballot initiative to voters. That could happen soon in California, where there’s an effort to get a $15 statewide minimum wage ballot initiative before voters in November 2016.

“Raising the minimum wage is incredibly popular with the public,” Cooper says. “As a ballot initiative, it passes.”