Want to raise the minimum wage? Take it to the ballot. 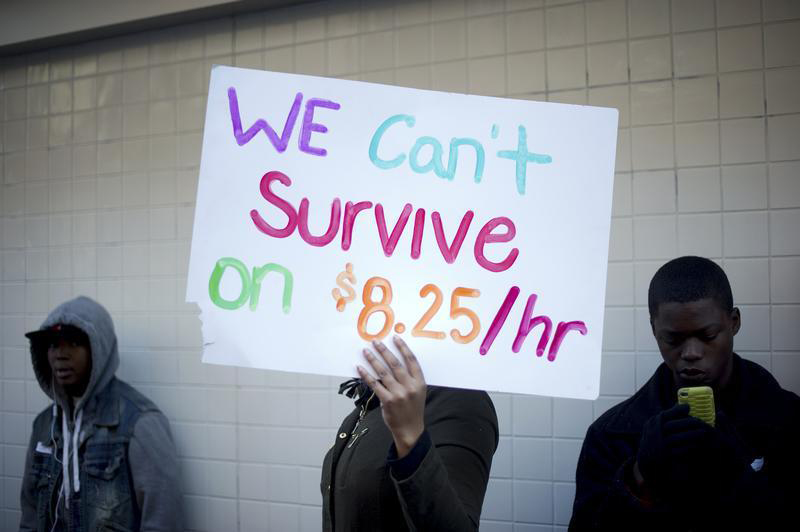 Protesters calling for higher wages for fast-food workers stand outside a McDonald's restaurant in Oakland, California December 5, 2013. The group, which numbered about 200, shut down the store for more than half an hour as part of a daylong nationwide strike demanding a $15 dollar minimum wage. REUTERS/Noah Berger (UNITED STATES - Tags: BUSINESS CIVIL UNREST FOOD) - RTX165IS
Photograph by Noah Berger—Reuters

When voters head to the polls for the midterm elections this November, they’ll be deciding more than what political party controls Congress. The paychecks of tens of thousands of workers will also be at stake.

Voters in fives states will be asked to approve or reject increases to their state’s minimum wage:

Ten states and the District of Columbia have already raised their minimum wages since the start of the year through legislative avenues. The five states putting higher minimum wages to a vote in November have had no such luck with that tactic this year. Lawmakers in Nebraska and Alaska tried to institute higher minimum wages by introducing bills to address the issue, but in both states they went nowhere. Likewise, Illinois Governor Pat Quinn advocated raising the minimum wage via legislation but didn’t garner enough lawmaker support. Elected officials in Pierre and Little Rock never even broached the topic.

In the past, ballot initiatives have been used to push minimum wage laws through especially stubborn states. Take New Jersey for example. In January 2013, Republican Governor Chris Christie vetoed minimum wage legislation that state lawmakers had passed. At the polls ten months later, New Jersey voters approved a ballot initiative to boost the state’s minimum pay from $7.25 to $8.25 with 61% of the vote.

“A higher minimum wage is incredibly poplar,’ says David Cooper, an economic analyst at the Economic Policy Institute. “If legislature is not being responsive to the public’s desires, advocates are going the ballot measure route because it’s been successful.”

Voters in Montana and Missouri voted down hikes in 1996, but since then, every minimum wage initiatives that have appeared on statewide ballots — 13 in total — have gained voter approval, according to the Ballot Initiative Strategy Center.

The early results from some of those increases were promising. In 1996, California voters approved raising the state’s minimum wage from from $4.75 to $5.75 by March 1998. In 2000, the California Budget Project, a nonprofit public policy research group, found that despite critics’ predictions that the hike would reduce jobs, the state’s employment development department reported a 1.3 million increase in the number of people employed in the state from September 1996 to September 1999 and a 276,000 decrease in the number of unemployed in that same time frame. Oregon residents also voted to increase the minimum wage in 1996, from $4.75 to $6.50 over a three-year period. In 2001, the Oregon Center for Public Policy reported that the first two stages of the increase had little or no adverse employment effect. And in 1998, Washington state increased its minimum wage from $4.90 to $6.50 within two years and indefinitely linked the pay rate to the cost of living. In the 15 years since, the state’s minimum wage has climbed to the highest in the nation—$9.32 per hour—while job growth has stayed steady at a 0.8% pace, 0.3 percentage points above the national rate.

Despite those results, the effects of raising the federal minimum wage and state rates remain a topic that’s fiercely debated, usually along partisan lines with Democrats arguing that hikes will produce more jobs, while Republicans paint increases as a business killer. The Congressional Budget Office added fuel to that argument in February when it reported that raising the federal minimum wage to $10.10 would have mixed results; by the second half of 2016, a hike could reduce total employment by 500,000, but it could also lift 900,000 people out of poverty and raise the incomes of 16.5 million workers in the an average week.

In such a divided atmosphere, ballot measures to raise the minimum wage have become not only an alternative to the legislative process but an avenue for passing more comprehensive minimum wage laws. For instance, of the 13 states that adjust their minimum wage annually based on the cost of living or inflation, ten enacted those law through ballot initiatives, according to the National Employment Law Project. (Michigan, Minnesota, and Vermont are the exemptions.) At the polls, “you can enact some of these model policies that are usually compromised out at the legislative level,” says Jack Temple, a policy analyst at the NELP. Legislative debate also opens the door to industry input that can drastically alter a bill’s course. The minimum wage law that the Maryland legislature passed in March carved out exemptions for Six Flags and other seasonal employers. The Washington, D.C. city council voted to raise the city’s minimum wage to $11.50 by 2016, but it didn’t touch the tipped minimum wage paid to restaurant serves, which stayed put at $2.77 per hour.

“The minimum wage is such a basic, common sense thing for voters,” Temple says. “At the ballot you get this policy approved in a way that makes sense to voters.” At the legislative level, meanwhile, the laws passed are often “weakened and compromised,” he says.