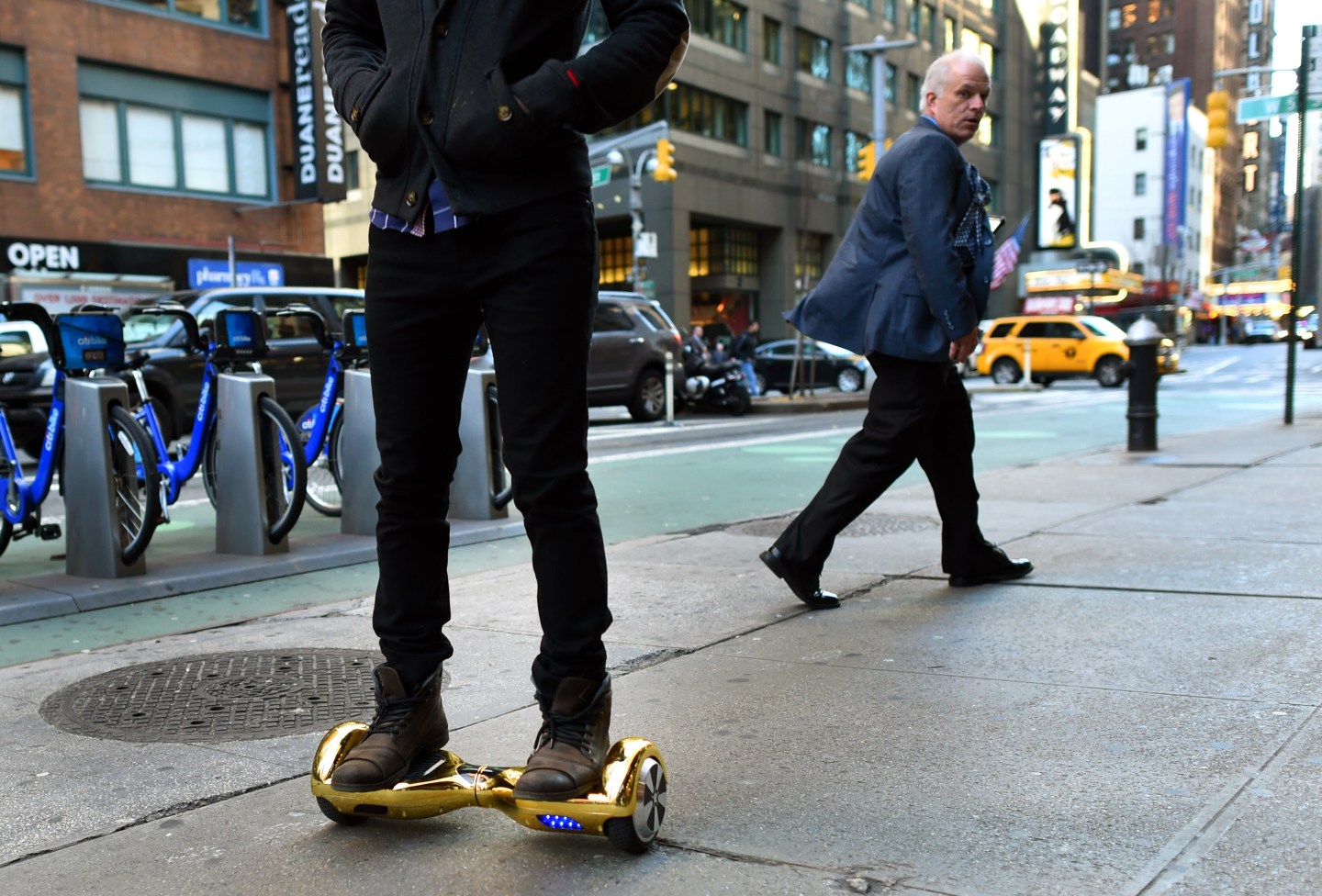 Whizboard Store manager 'Mor Loud' demonstrates the Hoverboard on Broadway in Times Square in New York on December 15, 2015. The hot item on many holiday lists will help you zip around town, the shopping mall and from one end of the workplace to another.These so-called "hoverboards" or self-balancing electric scooters, are surging in popularity in the first season where they have been available at relatively affordable prices -- as low as $300 for some models. AFP PHOTO / TIMOTHY A. CLARY / AFP / TIMOTHY A. CLARY (Photo credit should read TIMOTHY A. CLARY/AFP/Getty Images)
Photograph by Timothy A. Clary — AFP/Getty Images

Lithium ion batteries have been generating some real heat lately—literally.

The latest in an explosion of tech that catches fire when the batteries overheat, this past holiday shopping season, hoverboards quickly went from must-have tech to must-avoid products. But Stanford University chemical engineering professor Zhenan Bao may have developed a new solution for the long-standing hot button issue: batteries with a built-in safety switch.

Powering electronics from cell phones and personal computers to electric cars, energy grids, and airplanes, lithium-ion batteries have revolutionized technology. But the wonder-batteries have a problem—because they’re made with lightweight lithium and store a lot of charge, they can become unstable, generating considerable heat.

It’s an issue that stretches back as far as 2006, when Sony recalled roughly 10 million overheating laptop batteries worldwide, because they were burning consumers and bursting into flames.

In 2012, when lithium-ion battery systems inside brand-new Boeing 787s started catching fire, the Federal Aviation Administration ordered all of the U.S.-based “Dreamliners” grounded. The planes were allowed back into the sky once Boeing made changes to their battery systems, but that wasn’t the end of the on-board trouble for lithium-ions. In April 2016, the International Civil Aviation Organization will begin requiring lithium-ion batteries to ship at no more than 30 percent charge unless they’re inside devices. Meanwhile, hoverboards are banned on all major U.S. airlines.

Bao’s solution could allay many of these concerns. Revealing her work this week in Nature Energy, Bao has engineered a special filmy nanoparticle layer made of nickel and graphene that can shut down overheating batteries in less than a second.

The way the polymer works is simple. It sits in between layers of the battery, and when it gets hot, the polymer expands, pulling energized particles away from each other, temporarily shutting off the electric current. When the battery cools to under 104 degrees Fahrenheit, the polymer condenses, and the battery can be used again. It’s a heat-sensitive, re-usable switch, that doesn’t impact the battery’s performance. And just as important, it’s very thin, so it won’t add bulk to ever-shrinking electronics.

Bao says the group hopes to fund more research to develop and license the technology. One side effect, of course, is if you had a phone or laptop with this kind of safety battery inside, you’d have to give the battery a chance to cool down for a few minutes anytime it got too hot. But maybe that’s a good thing—we could all use a breather from our tech, every now and again.