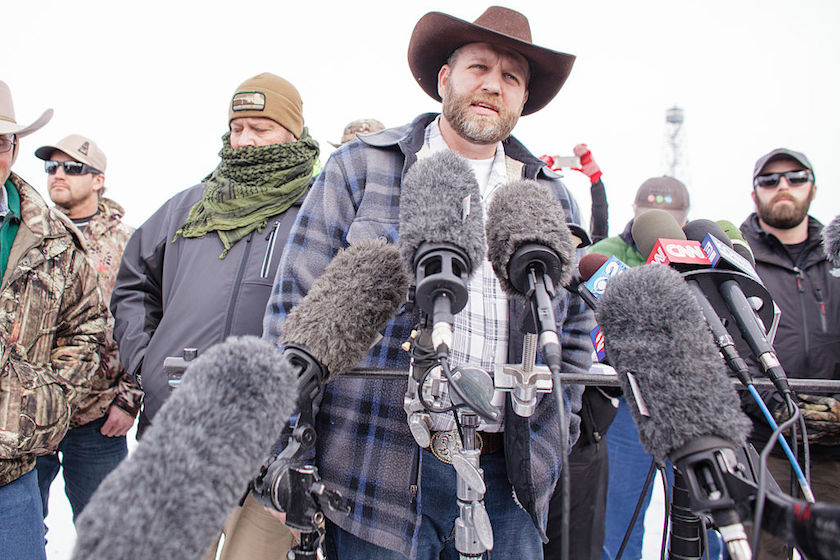 Ammon Bundy(C), leader of a group of armed anti-government protesters speaks to the media as other members look on at the Malheur National Wildlife Refuge near Burns, Oregon January 4, 2016. The FBI on January 4 sought a peaceful end to the occupation by armed anti-government militia members at a US federal wildlife reserve in rural Oregon, as the standoff entered its third day. The loose-knit band of farmers, ranchers and survivalists -- whose action was sparked by the jailing of two ranchers for arson -- said they would not rule out violence if authorities stormed the site, although federal officials said they hope to avoid bloodshed. AFP PHOTO / ROB KERR / AFP / ROB KERR (Photo credit should read ROB KERR/AFP/Getty Images)
Rob Kerr—AFP/Getty Images

Occupations often make protestors look bad. Case in point: The armed militants, who last week seized the Malheur National Wildlife Refuge in an effort to force the federal government to return the land to the people, are not exactly inspiring the masses. Quite the opposite. The protestors, who are calling themselves Citizens for Constitutional Freedom, became an immediate target of derision online. Using hashtags such as #YallQueda, #YeeHawdists, and #VanillaISIS, folks are having a field day mocking the militants. Some of the jokes take aim at the militants’ lack of clear messaging and standoff preparation; they recently used social media to ask the public to send supplies and snacks. Many of the posts, however, criticize their use of occupation as a tactic.

The protestors are armed and expressing willingness to use violence if the federal government tries to end the occupation. Even those who agree with the Citizens for Constitutional Freedom’s cause find their use of guns to get what they want difficult to swallow. Ted Cruz, a frontrunner for the Republican nomination, who generally is supportive of the militants’ criticisms regarding the size and scope of the federal government, told reporters:
“Every one of us has a constitutional right to protest, to speak our minds, but we don’t have a constitutional right to use force and violence and to threaten force and violence against others. So it is our hope that the protesters there will stand down peaceably, that there will not be a violent confrontation.”

Occupation as a tactic, however, is criticized because it brings protestors into direct conflict with law enforcement – and standoffs are not popular with the American public. The reality is – despite the recent killings of African-American citizens by police officers – polls find that individuals have a “great deal” or “fair amount” of trust in local and national police departments as well as in the FBI. And, while Americans’ confidence in police is at a historic low, law enforcement remains one of the most trusted institutions.
So why do protestors bother occupying anything?

Despite the bad press, occupations can help protestors affect change by spurring larger social movements. Occupy Wall Street is a recent, and rather obvious, example of how one occupation can move people from their armchairs to the streets. In 2011, the occupation of Zuccotti Park in New York City’s Wall Street financial district in protest of social and economic inequality received international media attention and inspired others to brave freezing temperatures and occupy everything from elite academic institutions to foreclosed homes. More importantly, Americans are still seeing the effects of the Occupy Wall Street movement. Activists harnessed the energy and expertise of the occupations and set up watchdog groups such as Occupy the SEC, which ensures that financial regulators are acting in the public interest, rather than the interests of Wall Street and its lobbyists.

Also, occupations can change what politicians talk about. One of the lasting effects of Occupy Wall Street is that politicians on both sides of the aisle are still talking about inequality. Sure, Republicans discussing the finer points of inequality in America is part of a larger political strategy that they hope helps the capture the White House in 2016. The point is that both the Democratic and Republican candidates give lip service to financial inequality and how they intend to address it. Occupy Wall Street is not the only example. The Occupation of Alcatraz Island for 19 months by Native Americans in 1969 caused President Richard Nixon to concede that, “The time has come…for a new era in which the Indian future is determined by Indian acts and Indian decisions.”

Finally, occupations can affect change. The Native Americans, who staged occupations at Plymouth Rock, Mount Rushmore, and the Bureau of Indian Affairs, had millions of acres of land returned to them and the U.S. government passed dozens of proposals supporting tribal self-rule. Arguably, Occupy Wall Street has affected substantial change as well. Offshoots of Occupy, such as Strike Debt, have politicians talking about – and acting on – student loan debt in America.

It is unclear when Ammon Bundy and his followers will put down their weapons and leave the Malheur National Wildlife Refuge, or whether their claims will have political feet. Regardless, history shows us that occupation can be a powerful way to stimulate political change.

Deana Rohlinger is a professor of sociology at Florida State University’s College of Social Sciences and Public Policy.