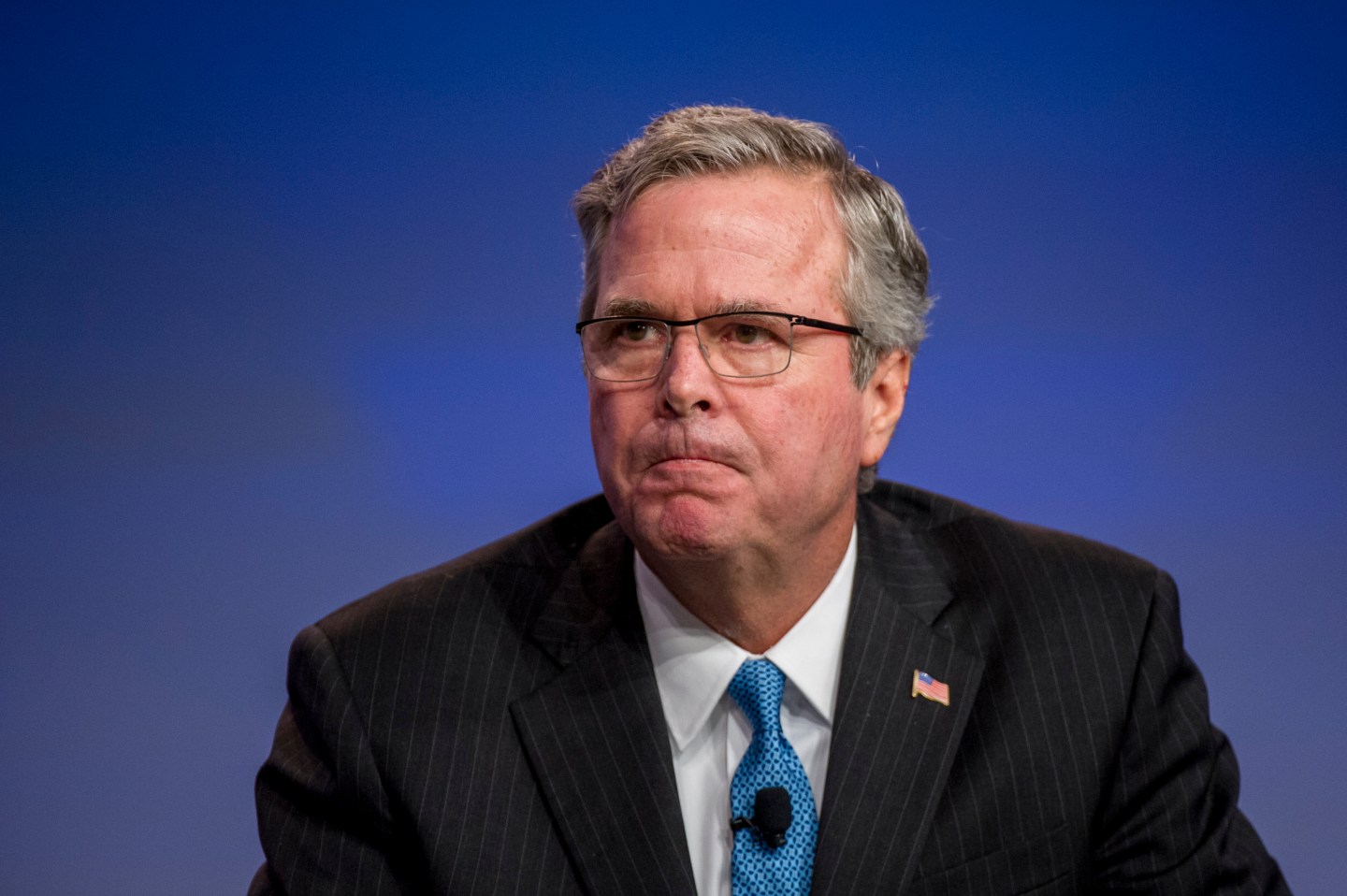 Jeb Bush, former governor of Florida, reacts during a keynote speech session at the National Automobile Dealer Association (NADA) conference in San Francisco, California, U.S., on Friday, Jan. 23, 2015. Bush is one of a large group of seemingly viable candidates for the presidential election, all of whom have conventional qualifications and fit within the Republican mainstream on public policy. Photographer: David Paul Morris/Bloomberg via Getty Images
Photograph by David Paul Morris — Bloomberg/Getty Images

For months, Jeb Bush has struggled to get his foothold in the Republican nomination fight, more often seeming like the nerdy kid who’s been invited to the mall just to be made fun of than a serious contender for most powerful job in the world. There’s one thing he’s never been short of, though: cold, hard cash.

Bush just got another infusion of money in the form of a $10 million donation to the pro-Bush Super PAC Right to Rise from none other than former AIG chairman Hank Greenberg.

So, can Bush get by simply by outlasting his opponents through superior money-raising abilities and a massive war chest? History says probably not.

Look at Rudy Giuliani in 2008. The former New York Mayor and hero of post-9/11 America was thought to be unsinkable as the GOP’s nominee in 2008. Excluding the money that Mitt Romney spent on his own candidacy, Giuliani raised the most money of any Republican candidate in calendar year 2007: a whopping $60.9 million, according to OpenSecrets.

What did that get him?

Virtually no support in the early primaries, a big disappointment in Florida, a withdrawal from the race before the end of January and precisely zero delegates—even fewer than luminaries like Alan Keyes and Rep. Duncan Hunter.

Bush, like Giuliani before him, is basically the New Coke of politics—no matter how much you spend on advertising, you’re out of luck if no one likes your product.

This isn’t to say that having money isn’t important, says Josh Dyck, a political scientist and polling expert at the University of Massachusetts at Lowell.

Campaign money is essentially a binary, he says. Either you have enough to continue to pay your staff and hold events, or you don’t. “If you can stick around, it makes sense to stick around,” he says.

That could be especially true this year. Donald Trump’s presence atop the polls has created a contest unlike any in the past. If, for instance, Trump and Sen. Ted Cruz end up going at each other so hard that both lose favor with the voters, the GOP may end up with a vacuum at the top. By staying in the race, Bush could be the person to fill it.

Dyck also points at Rick Santorum’s last-minute ascendance in Iowa in 2012 and John McCain’s New Hampshire surprise in 2008 as examples of why it can pay off to stay in the race even when you’re losing big. Unlike in general elections, where nearly all voters are strongly predisposed to vote for one party or the other, in primaries people actually do change their minds based on debates, ads, or simple shifts in feelings.

Still, even those exceptions give Bush little reason for optimism. Santorum went nowhere in 2012 and McCain was trounced in the 2008 general election. With that history in mind, it seems more than likely that the donations from Greenberg will end up being a case of throwing good money after bad. Especially given that it comes from Greenberg, one of the popular villains of the 2008 financial crisis. Does Bush really need to give voters another reason to associate him with the first decade of the new millennium?

Bush already has money; giving his Super PAC another $10 million isn’t going to convince anyone to vote for him.