Magic, the Virtual Assistant for Everything, Debuts A Premium Service 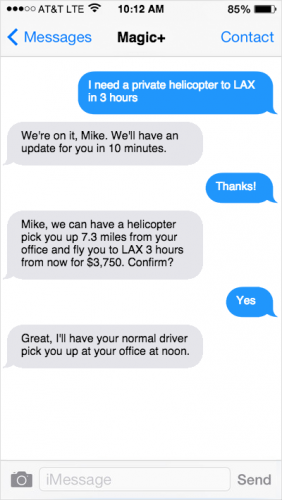 When reality TV star and pawn shop owner Corey Harrison was jilted by a staff member at an unnamed Laguna Beach hotel, he simply texted his Magic assistant with instructions on his revenge plan. Within three hours, a plane with LED lights on its wings was flying over the hotel with a brightly lit sign, “Suck it, Corey from Pawn Stars.” Similarly, when internet investor Cyan Banister decided to throw a Teenage Mutant Ninja Turtle party last minute with her friends, she used Magic to get a real life version of one of the characters to show up, delivering pizza.

The service used in both of these cases is a new, paid version of virtual assistant Magic, a startup born out of Silicon Valley incubator Y Combinator.

Magic debuted a basic service in February of 2015, which allowed anyone to text a single number to get everything from iPhone chargers to groceries delivered on demand. Unlike Postmates or other virtual assistants, Magic doesn’t operate within a mobile app, and is completely text based. Users sign up for the service, and upload a credit card on the company’s website. The startup charges a fee that ranges from $5 to $20 per order. Also, Magic’s assistants use other on-demand services, including delivery company Postmates and grocery delivery startup Instacart, to complete its tasks for users. The company sees itself more as a middle man between the user and other on-demand services, allowing them to use many other companies at once and with convenience.

MORE: This Startup Wants to Kill Off the Center of the Supermarket

Last year, Magic raised $12 million at a $40 million valuation led by Sequoia Capital, according to a source familiar with the financing. Chen declined to comment in the company’s outside funding.

After Magic launched in 2015, a number of CEOs and celebrities started using the service and asking for larger demands, such as scheduling helicopter rides or coordinating logistics for corporate events, explained founder and CEO Mike Chen. Chen and his team then developed a more expensive version of the service which catered specifically to these larger requests.

For $100 per hour, Magic Plus customers like Harrison and Banister can pay for a virtual assistant to complete any task. The price is steep, but Chen said that in many situations there are multiple people working on behalf of a client. He cited one case where a user was stranded in the middle of the night in an airport 600 miles away from his destination and Magic had ten people working to help the client. For more expensive requests, Magic sometimes will waive the fee, added Chen. He also said that the company is thinking about dropping the price, although it does continue to offer the basic, less expensive version of the service.

One of Magic’s users recently needed a venue for a corporate televised event, and Magic’s assistants rented out an event space to hold 100 people, rented a stage, transported all the event furniture, set up the audio technology, and catered all the food and drinks.

“It almost feels like having a hotel concierge around 24-7,” explained Harrison. “Also it acts as a full-time employee that you don’t have to pay full-time.”

On the background, Chen explained there is an artificial intelligence technology weaved into the software that the virtual assistants are using. For example, the technology will take into account a client’s location and tell the assistant what service should be used to complete the task.

Magic declined to reveal to Fortune how many users it has, but said that millions of text messages have been sent through both versions of the service.

WATCH: For more on virtual assistants, watch this Fortune video:

Magic isn’t the only service that is attempting to provide a virtual assistant. Startup Alfred will give users an assistant to coordinate grocery delivery, laundry pickup and delivery, and more. Operator, which was started by Uber co-founder Garret Camp, offers a similar text based assistant, but the company is focused on shopping requests.

While virtual assistants combined with artificial intelligence sound like the future, the business model for a standalone service isn’t proven just yet. There’s the cautionary tale of Zirtual, a virtual assistant startup that imploded after raising millions in venture funding.