These Four Letters Could Make You the Best…Boss…Ever 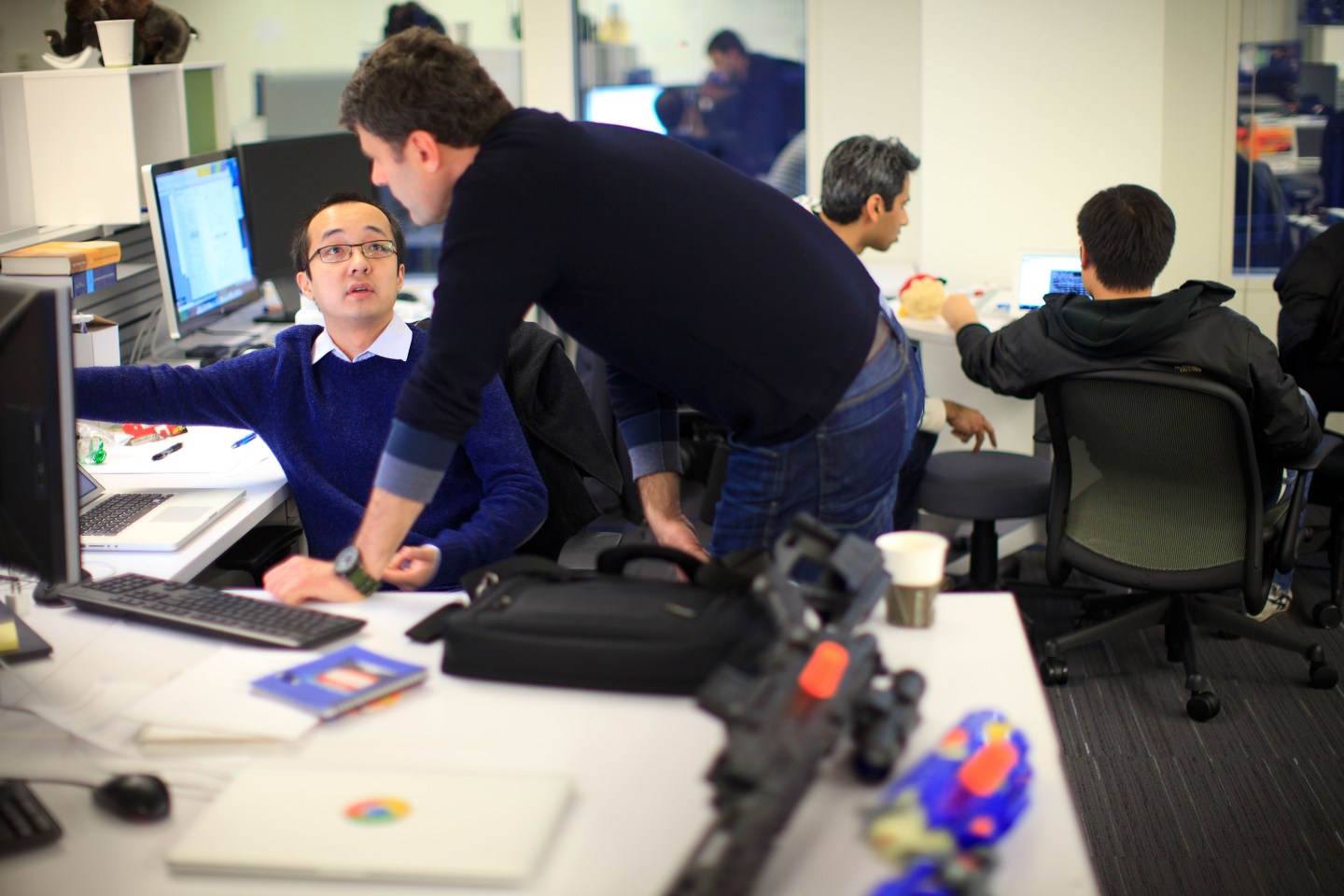 BOSTON - FEBRUARY 27: Le Ding, left, of Brookline, a data scientist, talks with Ivan MItrovic, of Boston, the director of data science, right. PayPal has opened an office in Boston's Financial District that includes free space for a dozen tech start-ups and the local division of StubHub, the online ticket seller. PayPal is one of the first big tech companies to open in the Financial District, meaning the T-shirt and jeans crowd will be mixing with the bankers and buttoned-down investors. (Photo by Dina Rudick/The Boston Globe via Getty Images)
Photograph by Dina Rudick — Boston Globe via Getty Images

The modern workplace is full of abbreviations: KPI, ROI, SWOT. But it’s a bit of alphabet soup from decades ago that could prove most critical to the success of managers in the digital age.

The need for MBWA—short for Management by Walking Around—was “the most important message Bob Waterman and I attempted to pass along in In Search of Excellence,” Tom Peters, the co-author of the 1982 blockbuster, tweeted out last week to his 131,000 followers.

Peters isn’t the only one who thinks that this is a problem. In a world where many managers feel they can barely keep up with the crush of their schedules and online communication is omnipresent, MBWA has become a lost art.

Last month, at the Global Drucker Forum in Vienna, a number of experts on organizational and human behavior—Henry Mintzberg, JC Spender, Sherry Turkle, and others—implored managers to retain a close, personal connection with their employees and their customers, even though that may run counter to one’s instincts when everybody is just a click away.

“Management is essentially a face-to-face, interactive kind of activity,” said Mintzberg, a professor at McGill University who has been studying and writing about the way that companies function for decades. When managers are “sitting at a keyboard…the only thing that they’re in touch with is the keyboard. They’re not physically or emotionally or intrinsically in touch with the people and things they have to be in touch with.”

To that end, one of the worst things that a manager can do to start the day is to fire off an email (or two or three or four) to his or her direct reports. Yet many do just that, and then keep the barrage coming. In the process, some hardly ever leave their desks. And if they do, it’s only to attend structured meetings where a parade of PowerPoint presentations invariably suffocates any genuine dialogue.

To fight this kind of inertia, Mintzberg offered some decidedly pointed advice: Have your assistant “put thumbtacks . . . on your chair for about half the day so that you get up and walk around and know what’s going on in your organization.”

MBWA isn’t foolproof. A 2013 Harvard study, conducted at 19 hospitals, found that there can be “negative repercussions if senior managers attempt, but fail to engage meaningfully with frontline staff.” One woman who responded to Peters on Twitter cautioned that executives have been known to bastardize MBWA, converting it into an exercise “for throwing their weight around.”

Yet the fundamental principle—that you can’t manage well if you simply sit on your butt and bark orders—is indisputable, especially today.

To be an effective leader “you have to be out there . . . feeling the little shifts, the subtle changes” that can build up over time and eventually have a huge impact on corporate culture and employee engagement, Steelcase CEO Jim Keane told the conference in Vienna.

MBWA, at least as a formal concept, dates to the early days of Hewlett-Packard (HPE). Co-founder David Packard brought the practice with him from General Electric where, as a young engineer in the mid-1930s, he discovered how essential it was to go down to the factory floor and work together with those on the manufacturing line to ensure that the vacuum tubes for which he was responsible were assembled correctly.

“That was a very important lesson for me—that personal communication was often necessary to back up written instructions,” Packard later recalled.

Yet the real magic of MBWA, as Packard and partner William Hewlett observed 80 years ago, is not that you get to clarify your directives; it’s that you get to listen to—and put trust in—those who work for you. What’s helping them get their jobs done and what’s getting in their way? What do they see that’s happening in the marketplace (since, after all, they’re probably closer to the customer than you are)? What are their ideas for innovation?

“Once instituted—by the 1950s the aloof, detached manager was reviled rather than feared at HP (HPQ) —Management by Walking Around had the practical effect of turning the organizational chart upside down,” Michael Malone explains in Bill & Dave: How Hewlett and Packard Built the World’s Greatest Company. “In that inverted environment, when it worked right, the higher you were in HP management, the greater the number of people you reported to.”

Some managers don’t take naturally to MBWA, either because of diffidence or arrogance.

But technology, more than temperament, may well be the biggest factor in keeping managers (and non-managers, for that matter) bound to their desks. “The demands of the workplace come to everyone on screens, and these demands can seem overwhelming,” Turkle, a professor at MIT, writes in her new book Reclaiming Conversation. “Sticking to your screen allows you to experience some measure of control.”

In reality, though, this is an illusion. Turkle cites study after study showing how face-to-face interaction among work colleagues “leads to higher productivity and is also associated with reduced stress.”

Said Peters: “The most important time to do MBWA is when you don’t have the time to do it. That is not a cute line—it is leadership bedrock.”

Of course, MBWA isn’t always easy to do, particularly when those working for a single manager may be scattered across the globe. Peters, however, brooks no excuse for not getting out there and connecting in the flesh. His answer to this challenge: “FFMA. Frequent Flyer Mile-ing Around.”