5 Big Questions That Haven’t Been Asked at GOP Debates 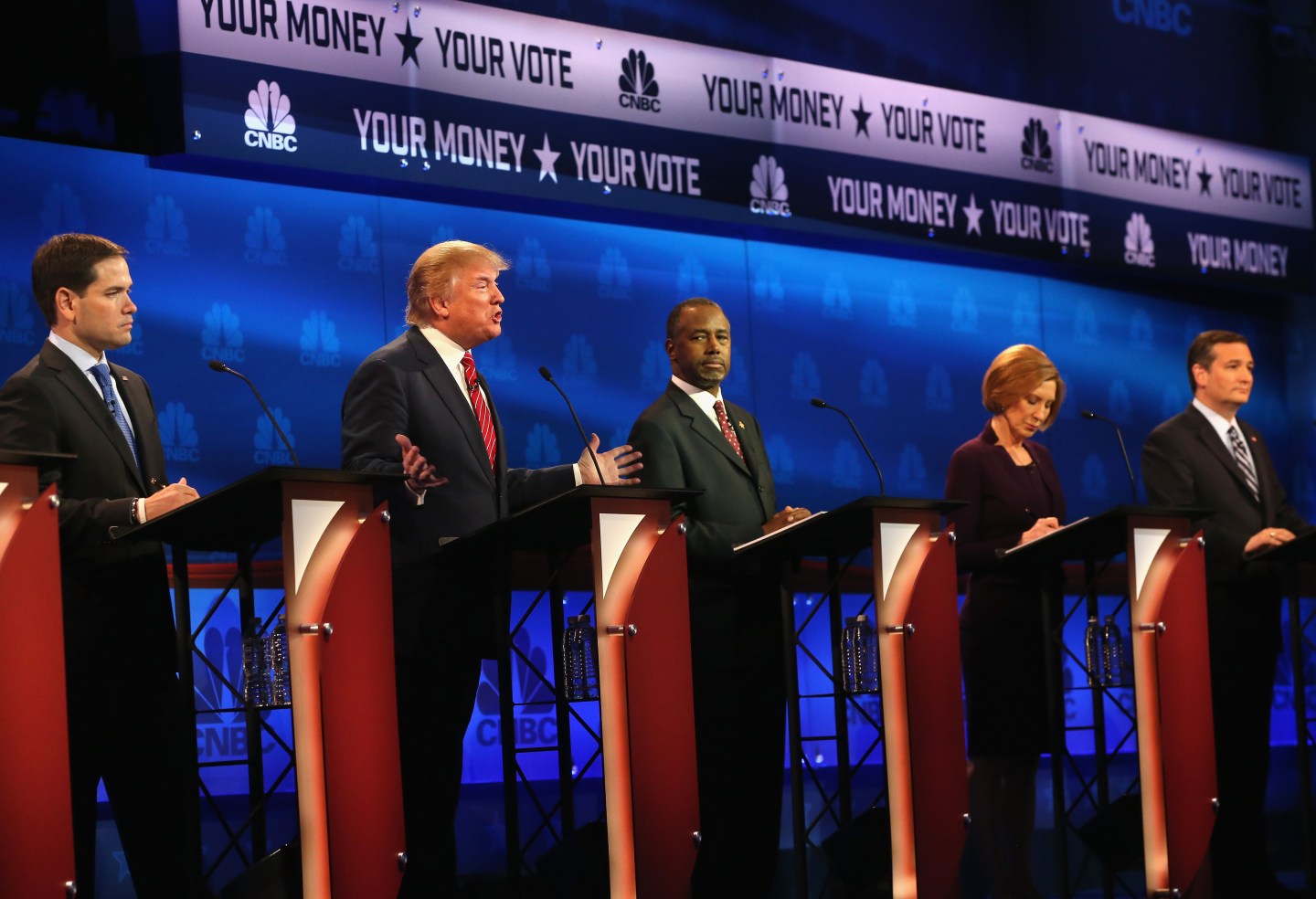 The Republican presidential hopefuls will gather in Las Vegas on Tuesday night for their fifth debate, and the second to be hosted by CNN.

Despite the candidates (or at least most of them) having appeared together on stage for more than eight hours already, there are still some pretty big questions that they haven’t been asked in a debate format. Tuesday’s event will focus on national security. And while that issue is newly top-of-mind for many voters, some bedrock economic policy issues also deserve attention from the candidates during their last in-person exchange of the year:

1. What should corporate America do to combat income inequality?

There have been just two questions on income inequality asked so far during the debates — one of which was directed at Sen. Rand Paul right before a commercial break (he focused on Federal Reserve policy), and the other which was for Gov. Mike Huckabee (who bemoaned general government incompetence). The only other candidate to even utter the phrase “income inequality” was Gov. John Kasich, who talked about changing the ways in which education dollars are allocated. The subject has not been asked of, or referenced by, Trump, Cruz, Rubio, Carson, Fiorina or Bush.

But given the few answers that we have heard so far, it doesn’t sound like there is much GOP appetite for a government solution. So that leaves the private sector. What can it do for a country in which the middle class is no longer a majority?

2. What is the best measure of unemployment, and what would that metric be with you as president?

Mitt Romney pledged during the 2012 campaign that he would cut the unemployment rate to 6% by the end of his first term. It currently stands at 5%. Assuming that none of the candidates want to give President Obama a big attaboy, what measure do they look at as a truer measure of the current U.S. labor picture? And, if elected, what baseline should Americans use to gauge their success or failure? It’s also worth noting that the word “unemployment” has been mentioned exactly twice in four debates — once each by Govs Kasich and Walker, talking their own states.

Sen. Rubio has discussed immigration during debates, but has not been asked about his participation in the so-called “Gang of 8,” which led a bipartisan push for comprehensive immigration reform just two years ago. Rubio has since disavowed that work, saying he would not have voted for the bill he helped co-author, but has never been pushed to explain why. In short, what changed? How much was about principles, and how much was about politics? And could he be expected to revert back once in the White House?

2015 has been a record year for corporate mergers and acquisitions, including the recent announcement that industrial stalwarts Dow Chemical and DuPont will combine. This has sparked serious concerns about the future of corporate spending on basic research and development, and not without good reason. Even venture capitalists who fund nascent companies, particularly in areas like energy and healthcare, stress how they come to the table only after basic R&D has been completed. But there has been no discussion of America’s corporate consolidation during the debates, nor of funding levels at federal government organizations like the NIH, DARPA or the U.S. Department of Energy. It’s certainly important to debate drones and fracking, but what about the next generation of technologies?

5. Should Americans be scared of engaging in everyday activities?

A lot of Tuesday’s debate is expected to revolve around national security, as this will be the first debate since the Paris and San Bernadino terrorism attacks. President Obama has taken flack for not speaking empathetically to the fears of many Americans, while certain candidates have been accused of stoking such fears for their own political purposes. The (hopefully direct) answers to this very simply-sounding question could give a window into presidential poise, but also into how the White House aspirants may choose to balance security with civil liberties.