This Image Explains Why the U.S. Can’t Stop Mass Shootings 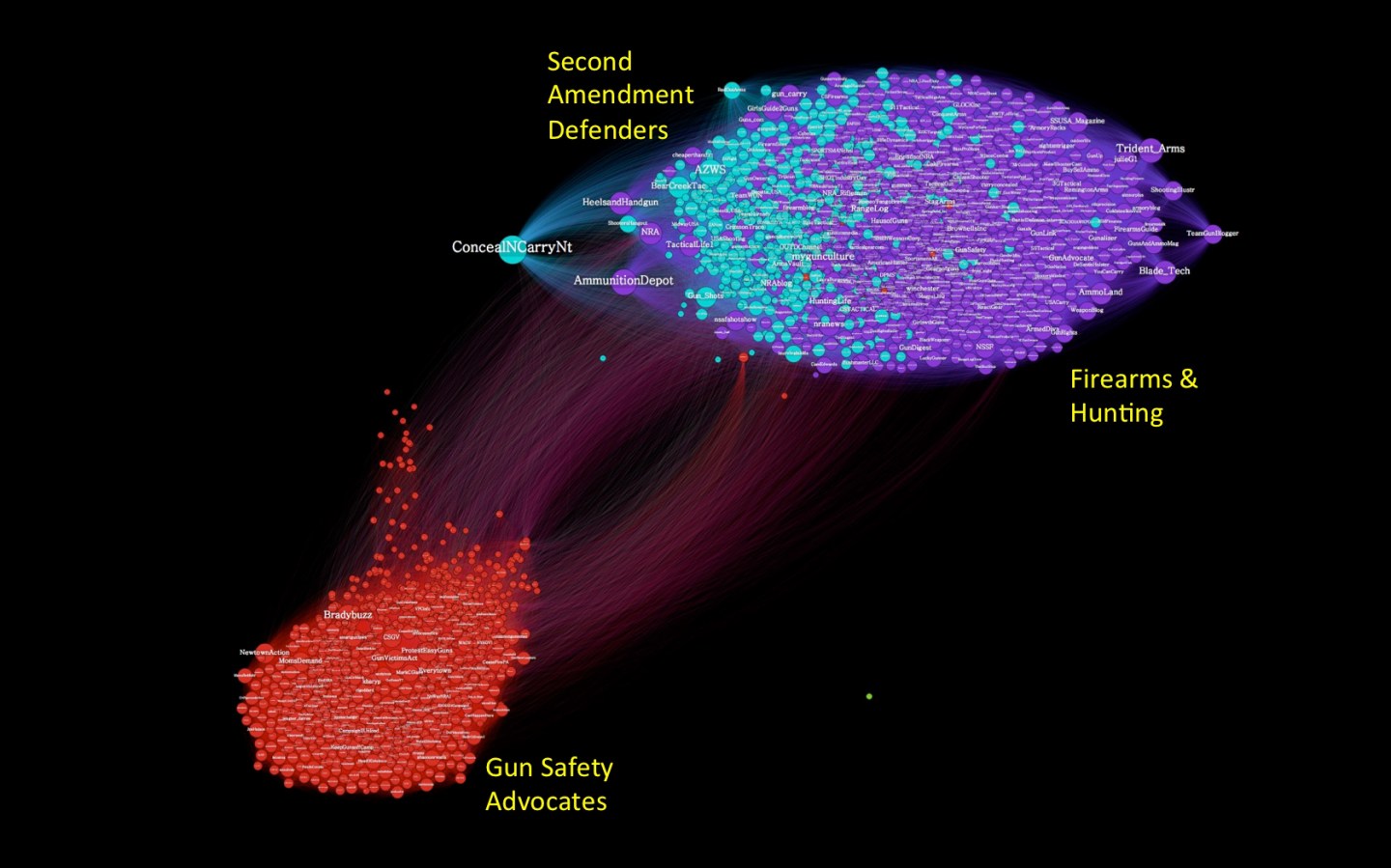 People are explaining the San Bernardino massacre in different ways. Some people say it is about gun laws. Others say it is about Islamic terrorism or mental health. Whatever the case, one thing is clear: Everyone, conservatives and liberals alike, grieved for the victims. No one wants such a thing to happen again.

Sadly, it’s only a matter of time before the United States suffers another mass shooting. For now, the country just can’t agree on a policy to address such shootings. And if you want to understand why, take a careful look at the image that accompanies this article.

The image was created in the hours after San Bernardino by data scientists at a company called Betaworks in New York City. It is composed of a series of dots, or nodes, that represent different accounts on the social media site Twitter (TWTR). Most importantly, it shows how news and comments about the shooting spread among three clusters of users, labeled here as “Second Amendment Defenders” (the blue dots), “Firearms and Hunting” (the purple dots) and “Gun Safety Advocates” (the red dots).

The image shows how there was an intense burst of activity among the respective clusters as people spread news of the shooting within their “social graph,” a term that describes the chain of relationships in any social media system. And within each cluster, there were some nodes that act as information super-vectors. Betaworks identified the most significant, in terms of each group, as Trident Arms (@Trident_Arms), Conceal&CarryNetwork (@ConcealnNCarrynt) and Brady Campaign (@Bradybuzz).

As you can see, each of the three groups shared information internally. Two of the groups—the purple and blue ones—passed news between their respective networks but shared almost zero with those in the red group. In other words, people largely exchanged information with those who already shared the same views: Gun control people talked to like-minded people, and the Second Amendment people did the same.

“It represents two extremely polarized and separate networks that are not talking to each other,” said Gilad Lotan, chief data scientists at Betaworks, who presented the graphic last week at Columbia University Graduate School of Journalism. This phenomenon of people talking only to like-minded individuals (known as “homophily” or “filter bubbles”) is not new, but Lotan says it is getting far more intense.

“In the long run, it’s kind of reflecting our society back at us. It’s reflecting a very ugly mirror at us,” said Lotan.

Gilad Lotan spoke as part of the “Transparency Series,” a set of lecture events on technology hosted by the Brown Institute at Columbia University.

For a more hopeful take, see Alyssa Milano explain in this Fortune video why “Twitter can change the world.”