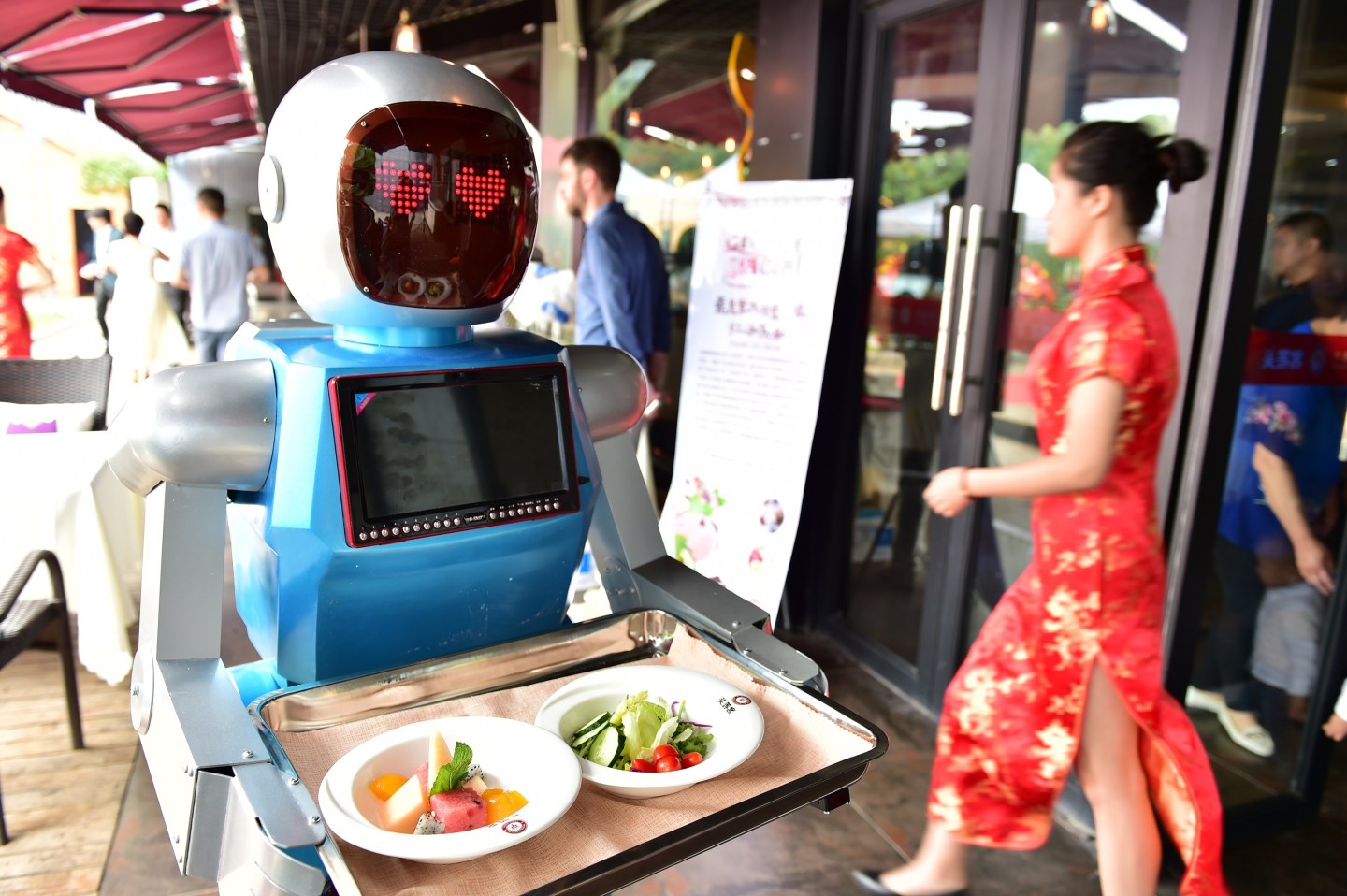 YIWU, CHINA - MAY 18: (CHINA OUT) A "male" robot waiter delivers meals for customers at robot-themed restaurant on May 18, 2015 in Yiwu, Zhejiang province of China. Sophomore Xu Jinjin in 22 years old from Hospitality Management of Yiwu Industrial and Commercial College managed a restaurant where a pair of robot acted as waiters. The "male" one was named "Little Blue" (for in blue color) and the "female" one was "Little Peach" (for in pink) and they could help order meals and then delivered them to customers along the magnetic track and said: "Here're your meals, please enjoy". According to Xu Jinjin, They had contacted with the designer to present more robot waiters to make the restaurant a real one that depends completely on robots. (Photo by ChinaFotoPress/ChinaFotoPress via Getty Images)
Photograph by ChinaFotoPress via Getty Images

Jeff Greene is worried—very worried—about the negative impact smarter technology is having on carbon-based life forms. That means you and me.

Greene, who made his billions investing in real estate—and betting against sub-prime mortgages—said the burgeoning use of artificial intelligence (also known as machine learning) is already costing people jobs. And things are only going to get worse.

This is a bad thing not just for the woebegone workers individually, but society as a whole. Fewer people with money means fewer buyers of goods and services.

Particularly worrisome to Greene is that neither political party is addressing this core issue. Republicans want to cut taxes, Democrats want free higher education, but neither side talks about whom new businesses will employ and where all those college grads will find work as jobs get automated out of existence.

“The current model isn’t working; we have to reinvent our economy,” Greene said. New businesses coming online may employ people to sweep the floors and a few to be CEOs, but they will hardly hire anyone in between, he said. “All those jobs in between are going away,” he said, noting that he had worked his way up the ladder at a hotel when he was a kid.

Meanwhile, U.S. tech companies—like Google (GOOG), Apple, and Microsoft (MSFT)—are honing ever-better machine learning that enables computers to drive cars and determine not only who we are but what our emotional state is based on facial images.

The idea that automation hurts jobs is not new. Academics have long noted that the flip side of better productivity tools, from spreadsheets to robots, is that they replace workers. The difference between 20 years ago and now is that artificial intelligence and machine learning have just gotten much better, which means self-learning machines are taking over more skilled positions.

And as noted before, fewer workers means fewer pay checks, which translates to less buying power for all the goods and services provided by this increasingly automated workforce. That, presumably, will be bad for everyone—including the big companies enabling all this automation.