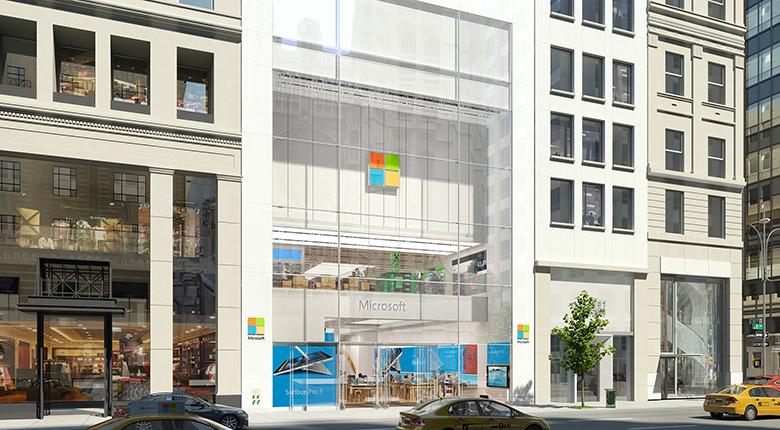 Wednesday night I went to the theater in New York. Thursday afternoon I went shopping.

Rest assured, the shopping trip was all about work. I ventured out at lunchtime in Midtown Manhattan to see the brand-new Microsoft retail store on Fifth Avenue, which opened to much fanfare earlier this week. Microsoft (MSFT) timed the opening of its high-profile, high-end shop, in a former Fendi store, to follow the launch of its interesting new products, including the Surface Book combination tablet/laptop. That gadget is on display at the New York store, along with other Surface tablets and the newest version of Microsoft’s fitness tracker. The store even has its own behind-glass-only display product, the virtual-reality headset HoloLens. (It’s not for sale yet, except to qualified developers willing to spend $3,000 for a unit.)

I was prepared to dismiss the Microsoft store. After all, the cup-half-empty view is that it is merely an exquisitely rendered copy of an Apple (AAPL) store. Same bold glass windows on the street. Same tables lined with products. Same cheerful sales clerks clad in monochromatic t-shirts—though Microsoft’s retail workers wear one of the four colors of the Microsoft logo. Same meeting space for product workshops and other gatherings. An Answer Desk to replace a Genius Bar.

There are differences too. The first floor is devoted to Microsoft-branded products. The second floor is for gaming, primarily Microsoft’s own Xbox. The third floor, in a marked departure to the Apple approach, is given over entirely to hardware partner Dell.

But there was one important similarity: The ground floor of the Microsoft store was packed. (By comparison, the Tommy Hilfiger clothing and Stuart Weitzman boot shops on either side of Microsoft had just a trickle of shoppers.) I can’t say if the lunchtime crowd at Microsoft was buying or simply gawking. I can say they were engaged in animated conversations with the salespeople. I can also attest to the knowledge and enthusiasm of the saleswoman who answered my questions about various Microsoft products and the store itself.