Amazon’s $50 Fire tablet worth every penny 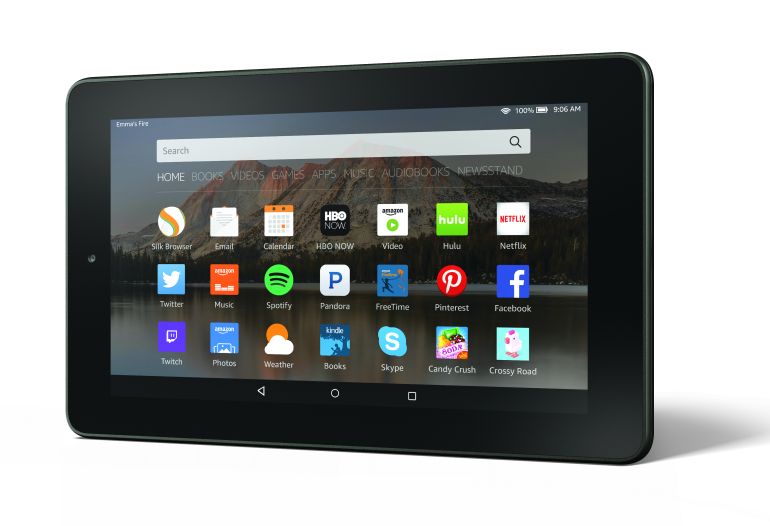 Sure, the Fire is plastic, a little chunky and nowhere near as trim or elegant as an iPad Mini. It also has a slightly smaller screen and a slower processor.

A price tag like that makes it hard to gripe about the Fire’s flaws. You’re buying a Ford Fiesta, here, not a Lexus. Both will get you to your destination; one just does it slower and without all the bling.

The Fire is a 7-inch tablet with a rounded black shell that’s comfortable to hold with one hand, though it feels a little heavier than its 11 ounces would suggest. It’s not razor-thin, but so what?

That 7-inch screen has just about the lowest resolution you can get — 1,024 x 600 pixels — and yet it’s sufficient for things like games, movies and, if you’re not hung up on print-quality text, reading. Although smaller fonts do tend toward the grainy, I found books, magazines, and Web sites to be perfectly readable. Higher-resolution tablets have spoiled us with laser-sharp lettering, but the Fire is passable.

In fact, it’s a downright impressive device for consuming media, which is ultimately the tablet’s raison d’etre. Amazon wants all Fire owners to subscribe to its Prime service that for $99 annually serves up a wealth of content: movies, music, TV shows, and books, plus added perks like free two-day shipping and unlimited cloud storage for your photos.

Of course, Amazon would be even happier to sell you outright all the movies, music, TV shows, and books not included with Prime. The Fire can do plenty on its own, but its real value lies as a conduit to the Amazon ecosystem.

It’s precisely the “Amazon-ness” of the tablet that gives it an edge over iPads. With Prime, for example, you can download movies and TV shows (including some HBO content) for offline viewing. iPads can do that, too, but it’s all pay-per-view. Amazon also offers lots of amenities Apple does not, including built-in tech support (known as Mayday), shared family libraries of apps and media, and parental controls.

If you’re wondering how to fit all that stuff into the Fire’s mere 8GB of storage, look to the included SD expansion slot, which accommodates inexpensive memory cards. That’s another feature missing from iPads.

Not everything about the Fire deserves praise. It feels sluggish at times, most notably when downloading content and running graphics-heavy games, and its single, rear-facing speaker leaves much to be desired. The tablet’s low-resolution, light-starved cameras aren’t good for much beyond video calls.

If there’s a little more room in your budget, you may want to consider the Fire’s slightly older, slightly smaller sibling, the $100 Fire HD 6. The latter’s 6-inch screen packs more pixels (1,280 x 800) than the Fire, so it looks considerably sharper. It also comes in a variety of cheerful colors, while the Fire remains steadfastly black. But the HD 6 doesn’t include an expansion slot, and it costs twice as much (though still far less than an iPad).

The good news is that if you’re in the market for a small tablet, you have two pretty great choices there. It’s clear Amazon is content to cede the higher-end tablet market to Apple, but fully intends to own the low-end.