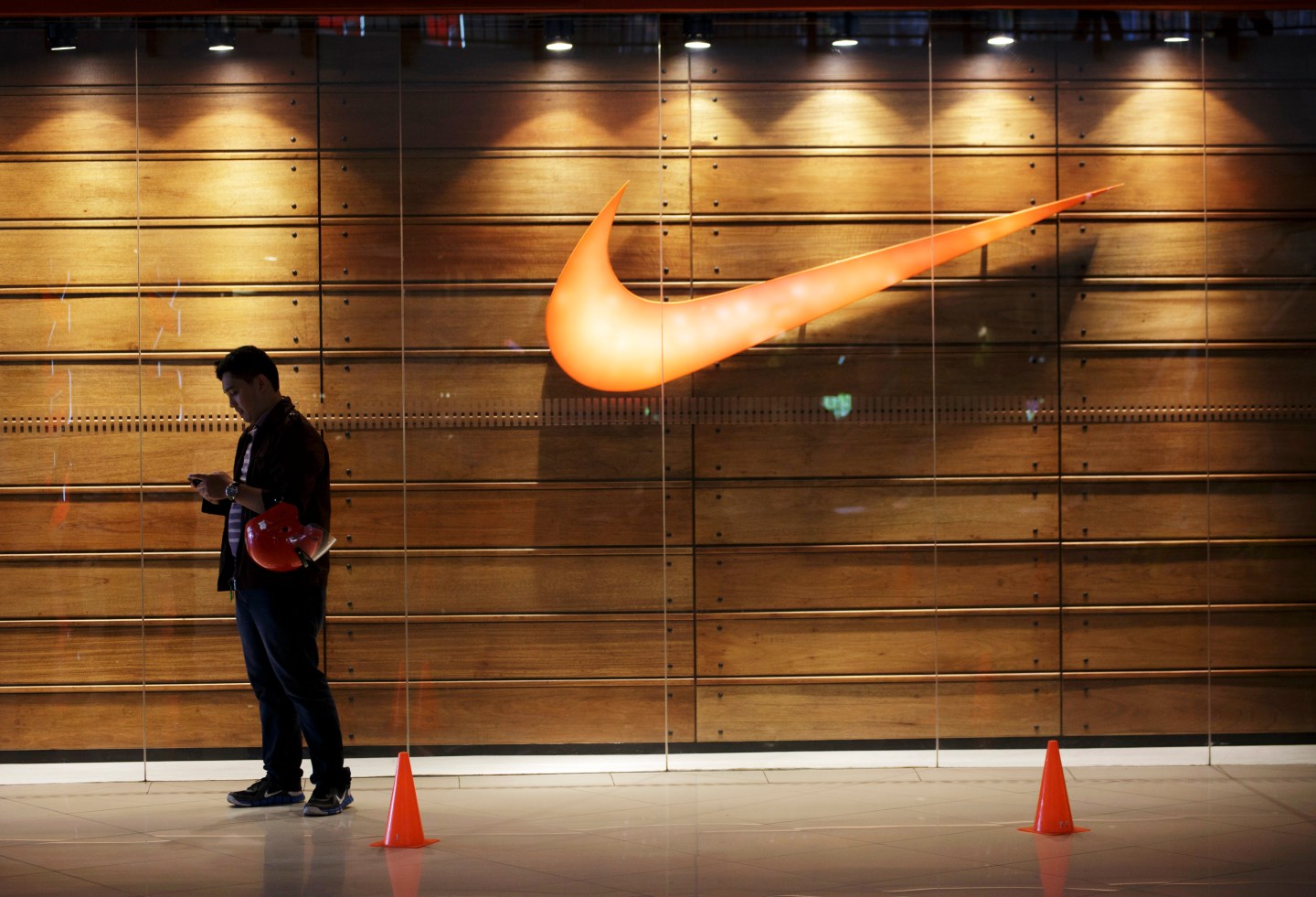 A man carrying a motorcycle helmet uses a mobile phone outside a Nike Inc. store at the Ayala Center Cebu shopping mall, operated by the Ayala Corporation, at the Cebu Business Park in Cebu, Philippines, on Monday, Aug. 3, 2015. The Philippine economy expanded 5.2 percent in the first quarter from a year earlier, the weakest pace since 2011, on slower public spending. Second-quarter data are due Aug. 27. Photographer: Kuni Takahashi/Bloomberg via Getty Images
Photograph by Kuni Takahashi — Bloomberg via Getty Images

The athletic apparel and shoes maker said Wednesday it expects to generate $50 billion in sales by 2020, boosted by greater global interest in its products.

The target was promised by Chief Executive Mark Parker at an investor presentation held at Nike’s corporate headquarters in Oregon. It implies a roughly 10% compounded annual growth rate. Despite its already massive size, Parker said Nike (NKE) is “built for growth.”

The rate of growth Nike is targeting will also help the world’s largest athletic gear maker stay far ahead of its fast-growing rival Under Armour (UA).

“We all know there is a global shift toward fitness,” said Trevor Edwards, president of Nike Brand, at the event. “And that cultural shift is running deeper than some people think.”

As a reminder, Nike generated $30.6 billion for fiscal 2015, which ended on May 31. Nike is promising to add $20 billion over a five-year period. It took Nike 13 years to grow from a $10-billion business to $30-billion athletic retailer. That fast-pace growth should also help Nike continue to climb on the Fortune 500 list. It ranked at #106 last year, up from #115 the prior year.

How will Nike achieve that growth? It sees the e-commerce business soaring to over $7 billion the next five years, up drastically from around $1 billion today. “We think about digital as an accelerator of all that we do,” Edwards said.

Among the brands Nike owns, the namesake will generate much of the growth but the Jordan brand will also be a hot seller. Jordan product sales are expected to double to $4.5 billion by 2020.

The women’s business is also a massive opportunity. Nike sees it growing from a $5.7 billion business to worth more than $11 billion. As Fortune has previously reported, Nike has more aggressively sought to get more women interested in the brand, especially as they become more active and incorporate more athletic gear into other aspects of their lifestyle – the much talked about “athleisure” trend. That is when athletic gear – sneakers, tights and other apparel – are worn around town, not just for workouts. For the women’s business, Nike has said it wants to build sales on two core items: tights and sports bras.

Nike could also soon debut a new footwear technology next year, timed for the 2016 Summer Olympics when Nike often prefers to launch new platforms. It debuted the Lunar Foam technology in 2008 when the Olympics were in Beijing, and Flyknit in 2012. Both technologies had relatively small launches but later permeated more of Nike’s gear.

The annual growth Nike has predicted implies that “athleisure” is a trend that is here to stay, though executives promise that all product development Nike puts into the company’s apparel and shoes is meant for athletic performance. Parker told investors that global athletic apparel has outsold overall apparel the past four years. With the growth projections set by Nike and Under Armour, it is almost sure that trend should continue.

Much has been made about the hot growth for Under Armour, which remains far tinier than Nike. Because Under Armour is on the path to perhaps someday become the next “Nike,” the company’s shares have soared 773% the past five years vs. the 208% jump for Nike.

Nike’s size will remain far above Under Armour. Last month, Under Armour said it saw 25% compounded annual growth rate, projecting to hit $7.5 billion in 2018 revenue (up from $3.1 billion in 2014). Under Armour has a lot of opportunities for growth. Like Nike, it currently sells more gear to men than women. Under Armour also generates most of its revenue in North America and for apparel. It has great potential abroad and by expanding more into the footwear category.

But Nike’s North America business alone is already 83% bigger than what Under Armour hopes to achieve globally in four years.