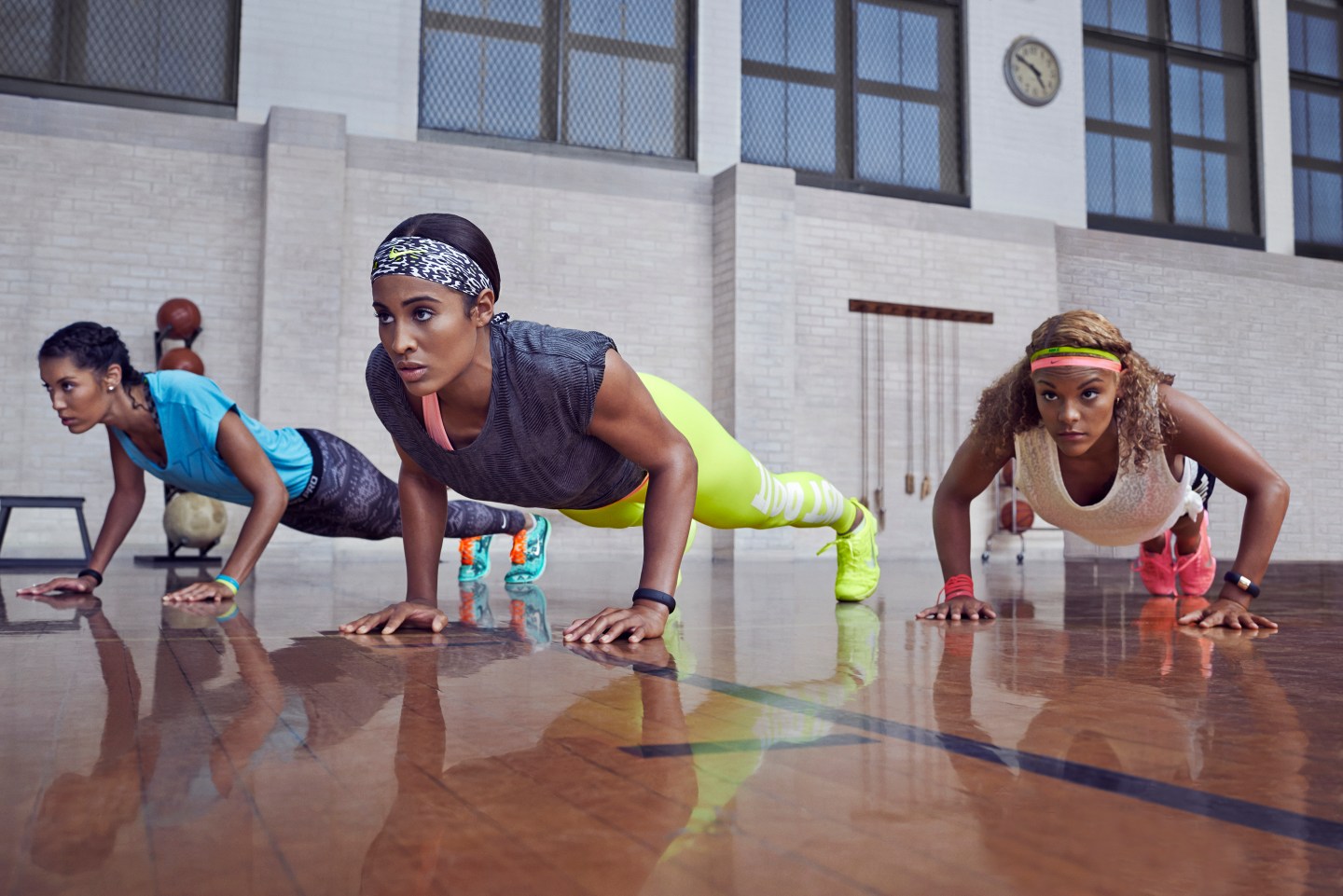 Nike has declared its newest line of athletic gear for women the best collection it has ever developed, with hopes that the new line of sports bras, tights and other apparel can add $2 billion to annual sales by 2017.

At a posh event in the trendy SoHo neighborhood in New York City, the athletic-gear maker debuted a line of gear for women in a show that focused as much on fashion as it did on product functionality. Olympic gold medalist runners Allyson Felix and Joan Benoit were at the presentation, as were models such as Karlie Kloss, showing off Nike’s latest designs, a collection that was a mix of bright colors and black basics.

Nike (NKE) executives say the women’s business, which is worth about $5 billion today, but represents just 20% of Nike’s total revenue, is expected to continue to outpace the men’s business in terms of growth, as more women become active and incorporate gear sold by Nike into other aspects of their lifestyle.

“In the women’s business, there is no performance without style,” Nike Brand President Trevor Edwards told Fortune. “She wants to make sure that she looks good, she feels good and she functions well — and it’s kind of in that order.”

Edwards said when Nike thinks about the women’s business, they start to focus on two core items: tights first, and then the sports bra. The company spent two years developing its new line of sports bras, which has fewer seams to curtail irritation. From a design perspective, Edwards said Nike thinks of a variety of movements, with the understanding that the gear will be used for many activities, such as running and yoga.

One reason Nike has had so much success courting both genders is the athletic look has increasingly become a fashionable style in both apparel and footwear. Retailers such as Foot Locker (FL) have taken note, touting apparel as a strong growth opportunity in their stores, as consumers increasingly want to look good both at the gym and after a workout.

A look at the most recent ad campaigns from athletic-gear makers signals how companies are valuing both function and style, almost equally. Under Armour (UA) earlier this year unveiled ad campaigns for model Gisele Bündchen, as well as an athlete, ballerina Misty Copeland. Gymnast McKayla Maroney has featured in stylish Adidas clothing too — not on a vault or beam, but outside in a park.

Though activewear makes up less than 20% of the total apparel market, sales for that segment have outperformed. The women’s activewear market totaled $15.1 billion in the 12 months that ended in August, up 10% from the same period in the prior year, according to research firm The NPD Group. NPD analyst Marshal Cohen has said the now-favored casual styles of athletic clothing are at their strongest point since 90s-inspired Juicy Couture warmup suits were a hot seller.

While Nike and peer Under Armour are making gear meant for participation in a variety of sports, the look and style is just as important, according to Sterne Agee analyst Sam Poser.

“They have to make good looking stuff for people to wear to the gym, at the gym, and on their way home from the gym,” Poser said. Poser has said he expects Nike’s total sales growth will remain robust at least through the 2016 Olympics.

But Nike faces competition in the space from both traditional rivals and those seeking to cash in on the activewear trend. Youth-focused apparel purveyors Forever 21, Urban Outfitters (URBN) and H&M have jumped into the market. Urban Outfitters has 646 activewear items for women on its website, while Forever 21 and H&M each have more than 100.

Nike isn’t vexed by the heightened competition, and the company says the popularity of athletic gear today isn’t a trend, but a shift in consumer lifestyle.

“No other brand serves the complete needs [of the consumer],” Edwards said. “It isn’t just about a cool ad. It isn’t just going to the store and buying the next cool looking thing.”

Edwards added that Nike leads the market by not only selling apparel and shoes, but also offering a vast selection of mobile apps and other services to help serve its customers best.

“For us, style is really important, but our style comes first and foremost from function,” he said.