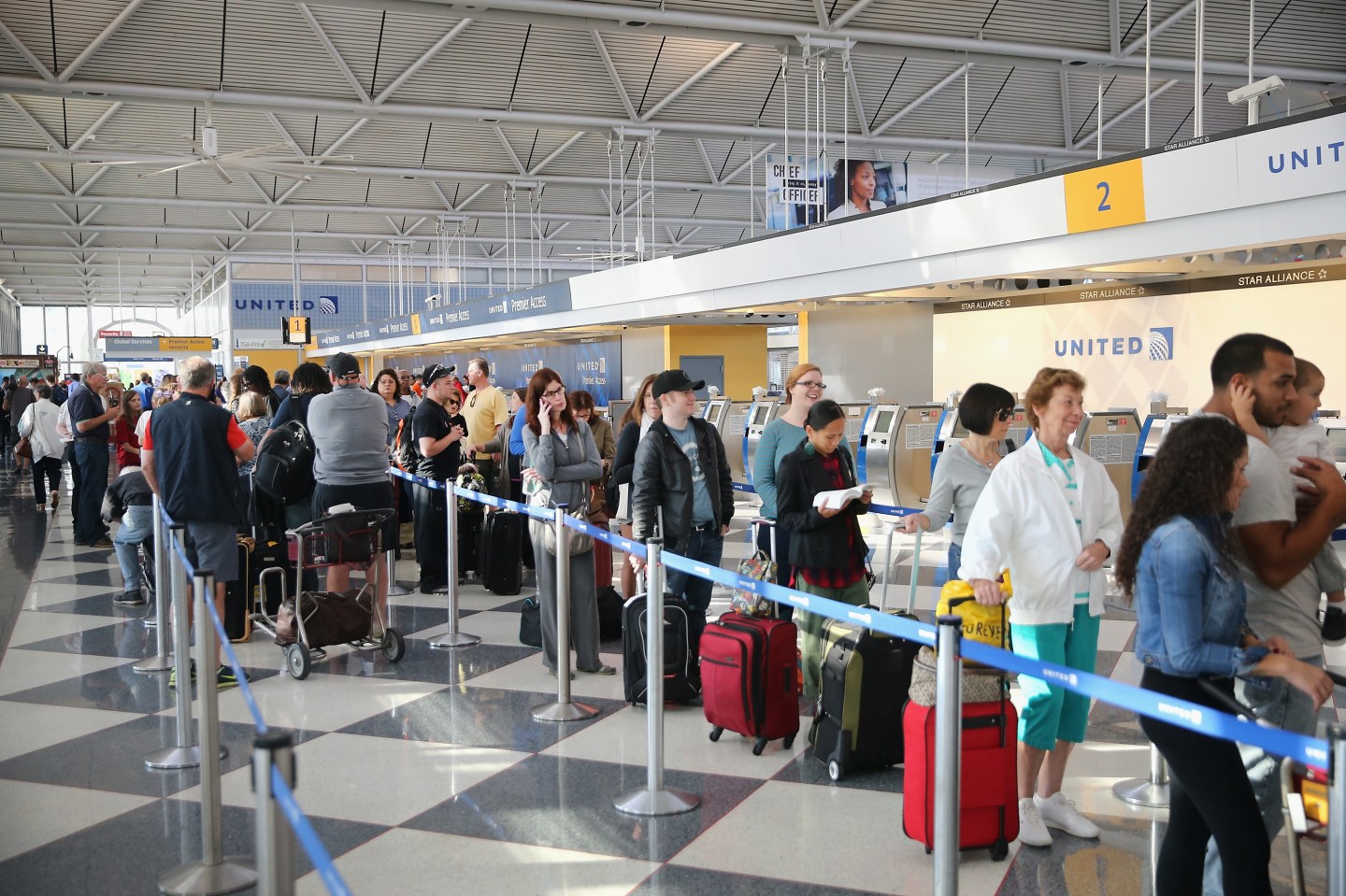 CHICAGO, IL - SEPTEMBER 26: Passenger check in for flights at O'Hare International Airport's on September 26, 2014 in Chicago, Illinois. All flights in and out of Chicago's O'Hare and Midway airports have been halted this morning because of a fire at a suburban Chicago air traffic control facility. (Photo by Scott Olson/Getty Images)
Photograph by Scott Olson — Getty Images

If you’re looking for a cheap airfare, there’s good news, according to new research from the Global Business Travel Association (GBTA): Continued declines in oil prices are leading to lower ticket prices.

But there’s also bad news. While the average domestic round trip fare is expected to fall to $379 this year, compared to $392 in 2014, you’ll probably pay about the same to fly. Why? The benefit and savings from these lower fares is likely to be negated by increasing fees, according to the GBTA study, which was released today.

“The average business traveler will notice a continuation of expanding fees for various ancillary services,” explains Joseph Bates, GBTA’s vice president of research. “In addition, they may notice that these fees are going up. Higher baggage and change fees are among those.”

In other words, the fare cuts aren’t real.

The findings are part of a broader survey of the economy and corporate travel, released quarterly by GBTA, an industry trade group. It projects business travel spending will increase by 3.1% in 2015 and 3.7% next year, a downward revision from June’s rosier forecast of 4.9% and 5.4% growth, respectively.

How it breaks down

Average airfares are trending lower, and could be headed even lower, thanks to lower energy prices and weak demand.

But GBTA researchers also noted that airlines are offsetting those lower fares with higher fees. For example, airline reservation and cancellation fees have risen from $2.2 billion a year in 2010 to to $2.9 billion in 2014.

But those are just two of the fees. Many others, including surcharges for early boarding or more legroom in economy class, don’t have to be reported to the government and are not on this chart.

“All of these fees can easily offset the reduction in airfares due to oil price declines,” says Bates.

The takeaway: For the airline industry, it’s good news. And it’s translating into higher profits, including this quarter’s stellar results. The global industry recently had to revise its forecast to a $29.3 billion net profit this year, up from $16.4 billion in 2014.

While the earnings outlook for all regions improved, over half the global profit is expected to be generated by airlines based in North America ($15.7 billion). American carriers’ profit margins are the fattest, too — more than 12% compared, or double that of the next best-performing regions.

Travelers will see the effects, too. And Kevin Mitchell, founder of the Business Travel Coalition, which represents corporate travel buyers, says it extends beyond the confusion of being quoted a low fare but paying more to fly. The fee sleight-of-hand points to a much bigger problem, critics say: A system that allows airlines to conceal some of their fees, making the true costs of airline travel more challenging to compare.

“It’s like the old saw about the pond being 6 inches deep on average while ignoring the 6-foot holes,” he says.

The system, he adds, “is an affront to consumers.”