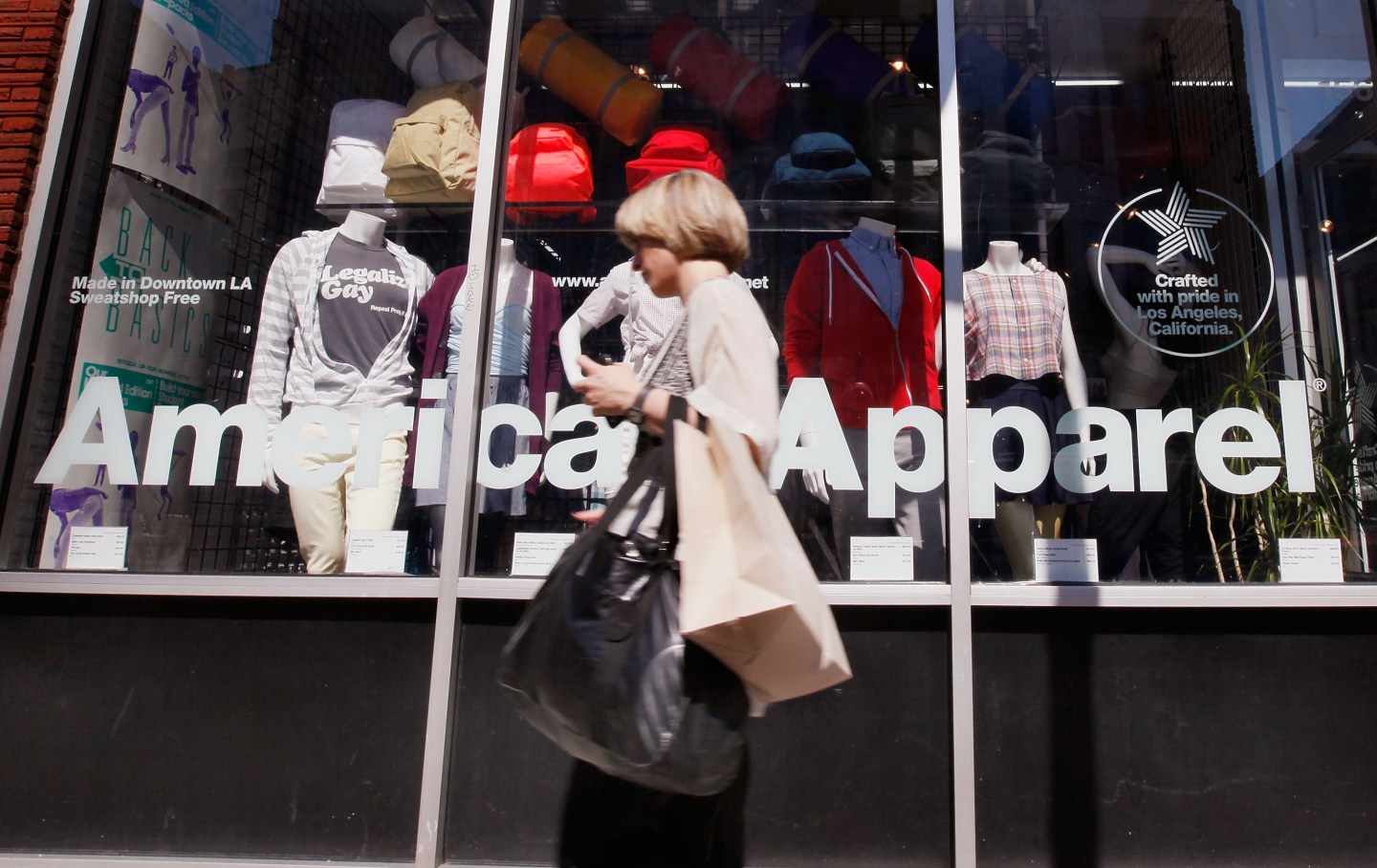 American Apparel (APP) filed for Chapter 11 bankruptcy protection on Monday, becoming the latest in a long line of retailers to take the walk of shame in an effort to revive as flagging business.

Indeed, such protection is primarily designed to give a company breathing room and lessen its debt load (in the case of American Apparel, the debt should fall by at least half to $135 million) while it tries to regain its footing. In fact, some retailers have managed to stay in business after a bankruptcy filing: Kmart, although still struggling now, in 2004 became part of Sears Holdings (SHLD), and Eddie Bauer, bankrupt in 2009, is in expansion mode. A predecessor to Macy’s (M) filed in 1992 and that retailer ultimately roared back.

But word to the wise, as the cases of Circuit City and Borders made clear, bankrupt retailers more often than not go out of business altogether.

Here is a look at the 10 largest retail bankruptcies in recent years, as ranked by assets at time of the initial court filing. Data is from BankruptcyData.com as well as court filings.

Circuit City, once the top U.S. electronics retailer, went out of business in 2009 after failing to find a buyer that would keep it going. The company was ultimately felled by its inability to respond as quickly and deftly to the rise of online retailers like Amazon.com (AMZN) and aggressive incursions by mass merchants like Walmart (WMT) and Target (TGT).

Customers walk away after shopping at the going-out-of-business sale at Linens 'N Things November 21, 2008 in Miami, Florida.

The 570-store housewares chain went under after private equity firm Apollo Global Management (AGM) saddled it with more debt than it could handle. Linens & Things, which at one point had annual sales of $2.7 billion, later came back to life as an online only brand. And nearly two years ago, it was sold to Galaxy Brand Holdings, an investment vehicle owned by private equity firm The Carlyle Group (CG).

The supermarket chain recently filed for Chapter 11 protection for the second time in five years and sold the bulk of its stores to rivals Acme and Stop & Shop. The grocer was hurt in recent years by companies like Walmart, Costco (COST) and Target stealing consumers on the lower end of the price spectrum, and Whole Foods (WFM) on the higher end. The A&P case is still making its way through bankruptcy court.

A RadioShack store in 2015, the last time the company filed for bankruptcy protection.

After struggling for years as electronics shoppers shifted online and digital technology emerged, the 4,000-store RadioShack filed for bankruptcy on February, marking an ignominious end for a94-year-old retailer that had sold the first mass-market computer. Last week, a federal judge signed off on Radio Shack's Chapter 11 plan, which distributes proceeds from the company’s liquidation to creditors.

Blockbuster, once a fixture in America's shopping and strip malls, struggled to compete with the emergence of Netflix (NFLX) and other video-on-demand services. Blockbuster was bought by Dish Network (DISH) in 2011, but two years later the video-rental company said it close its remaining 300 U.S. stores.

The Borders bookstore chain was slow to adapt to the e-books phenomenon -- or even to build a user-friendly e-commerce site -- fatal mistakes that saw it lose sales to Amazon (AMZN) and ultimately led to its collapse. Barnes & Noble (BKS) fared better, launching the Nook and eventually benefiting from the revival of print book sales.

The food-court fixture filed for bankruptcy protection in 2014 for the second time in three years after choking under too much debt and declining traffic at many U.S. malls. That June, Sbarro re-emerged with a smaller debt load and a plan to let customers make their own pizzas at a chain known for reheating pizza, taking a page out of Chipotle's playbook.

The recession was a hard time for mid-tier jewelers, with consumers pulling back on items they didn't really need (i.e., diamonds). Friedman's, which had 455 stores, was hit by an involuntary Chapter 7 liquidation filing at force, later changed to a Chapter 11 proceeding. But ultimately, Friedman's went out of business.

A Brookstone store is seen at Rockefeller Center in New York City.

Brookstone, the specialty retailer famous for massage chairs and travel electronics, filed for bankruptcy protection in early 2014, hurt by high debt. But unlike many of its bankrupt retail peers, the company has pulled through and continues to operate as a chain with over 200 stores.

A surfboard with the Quicksilver Inc. logo is displayed outside their store in New York, U.S., on Wednesday, March 11, 2009.

The surfer-skateboarder inspired Quiksilver failed to pull off a turnaround and last month filed for bankruptcy protection, planning to turn over control to senior lenders via an investment from Oaktree Capital Management.