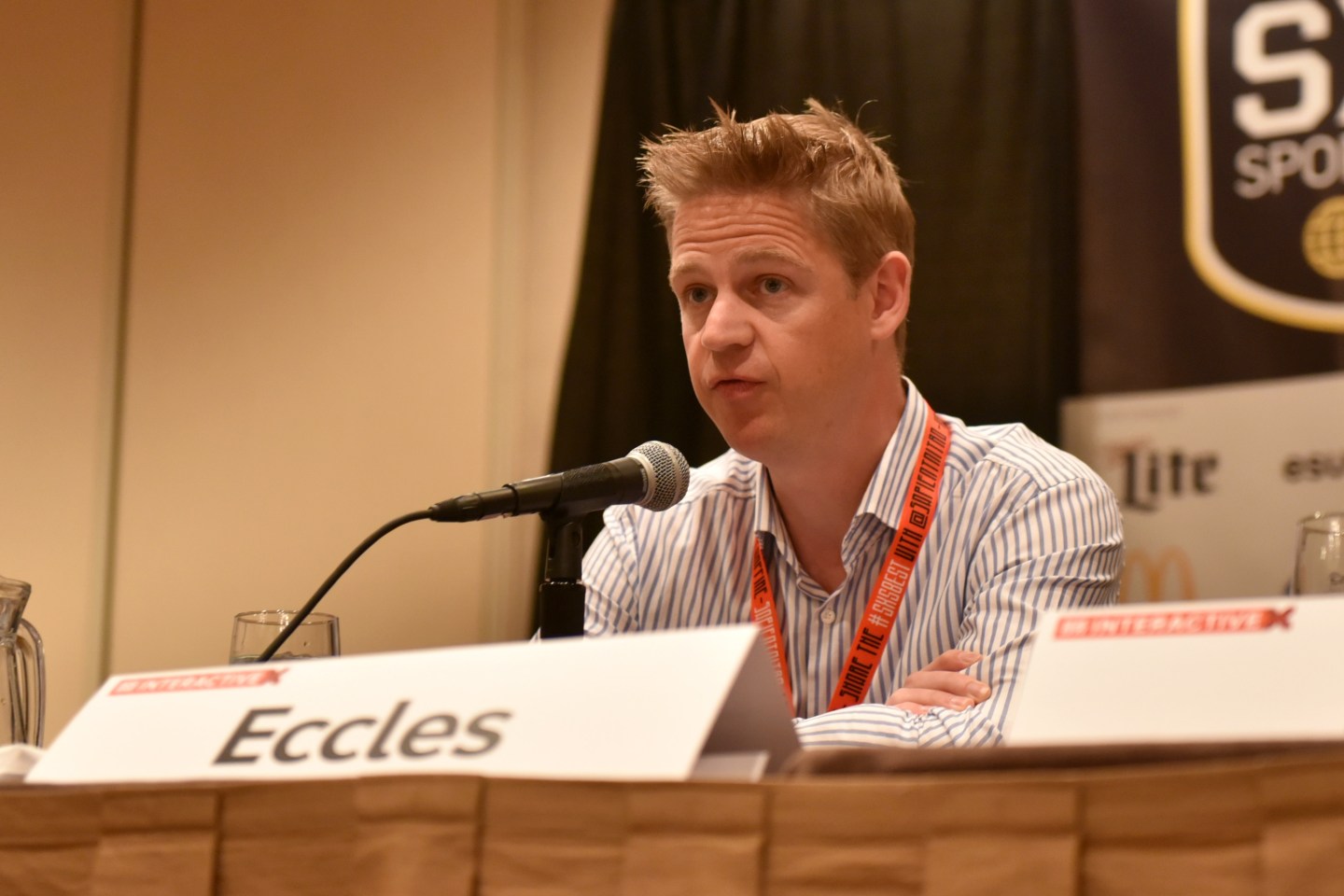 To a fantasy-sports layperson, DraftKings and FanDuel look basically identical. They offer the same service: an alternative to traditional season-long fantasy sports. Users can enter new leagues and draft fresh teams every day, and they can win real money doing it. (Whether these daily “contests” are totally legal is a separate—and still gray—issue.)

There are in fact subtle differences between the two products and the strategies behind each. DraftKings offers more sports (including golf, mixed martial arts, and Nascar), but FanDuel says it is “deeper” in the ones it offers. DraftKings has used a number of celebrity spokespeople in its marketing, including Edward Norton, Ronda Rousey, and Rob Gronkoswki, while FanDuel’s ads show “regular guys” that won money on FanDuel. Both companies have raised more than $350 million in private fundraising, both are valued by investors at more than $1 billion, and both have spent like crazy—a combined $100 million on TV ads just during Week One of this NFL season—to acquire users.

At the moment, DraftKings appears to have more momentum and buzz. But FanDuel CEO Nigel Eccles is confident in his growth strategy. After all, he was there first—FanDuel launched three years before DraftKings.

Eccles sat down for a candid conversation with Fortune last month at the FanDuel headquarters in New York. Here’s an edited transcript.

Fortune: You founded FanDuel in Scotland and you still live there, but now it’s based in New York. How does that work?

Nigel Eccles: We moved the company to New York in 2011. But yes, the founding team were five Brits who had never played fantasy football before. First we had HubDub, which was a political prediction game, and I had been thinking about fantasy sports. I had literally printed out the Unlawful Internet Gambling Enforcement Act in 2006. And we eventually came up with the idea of offering fantasy sports contests that would just last one day. We launched that in July 2009. Fantasy baseball was one of the first ones but then football took off and blew way past baseball. Football was about 50% of our revenue last year, and basketball was about 30%.

We do not. We took a look last year at the question, “Do we go broad or do we go deep? Do we add soccer, and Nascar, and MMA, and golf?” And when we looked at our data, we said, you know what, 80% of our revenue comes from NBA and football; it’s more important that we go deep there.

Does it worry you that DraftKings offers those?

One of the big complaints about daily fantasy is that only the obsessives who do intense research win. Can a casual sports fan win money on FanDuel?

Oh, sure. Look, the first thing we say is it’s a game of skill. So the more you invest in it, the better you’ll do. But we offer lots of types of leagues. We offer friend leagues. We offer 50/50 leagues where the whole top half of finishers wins. What we’re saying to people with those is, “You might not be the best fantasy player, but you’re better than average, right?”

So, why is this not betting?

At the federal level, fantasy sports have safe harbor under the Unlawful Internet Gambling Enforcement Act of 2006. At the state level, it’s two parts. First, we’re a game of skill. We’re very similar to, say, a golf tournament or a spelling bee or a road race. There’s an entry fee and if you win it, there’s a prize. It’s not gambling because it’s the skill of an athlete that determines the winner. We can show with FanDuel that the high-skill players will win predominantly. Second, our games are considered contests between players, rather than betting against the house.

Why is it any different than betting on a horse at the track?

Because that wouldn’t be skill-predominant. If you were really good, you still are going to lose like half the time. Chance is still more important than skill. And a lot of states have specific laws that horse-racing is gambling. I also think fantasy sports is a mass-market activity that’s accepted as a game of skill. This is the way that fans want to engage in sports. That’s another reason why the leagues have got behind it.

Have all the leagues really got behind it?

Absolutely. We have a very close relationship with the NFL, we buy media from them, we’ve partnered with 16 teams. The NBA is an investor in FanDuel. MLB and NHL have partnered with DraftKings…

But the NFL as an organization has not partnered with either one.

Correct. But they’ve opened up the teams for partnerships, and we buy media from them, we work closely with them, and they’re very interested in the category. I just think they treat it differently from MLB and NBA. It’s kind of unclear which way they’ll go.

Could someone argue the ‘game of skill’ defense is just a lucky loophole?

No, no. There’s certainly an argument that some people just don’t like it, but those people probably don’t like anything. Again, it’s akin to a golf tournament, road race, or spelling bee, and no one would say those are gambling.

But in those, you are the person competing, whereas in fantasy, you’re not the one on the field. Your product is more like if you bet on me to win the spelling bee.

But we can prove that our most skilled players can win predominantly. We can show that skill is predominant to chance.

Does that conflict with marketing to new users, telling them they can win?

Well no, because, it’s not like you would never play golf because you can’t beat Tiger Woods.

Let’s talk about DraftKings. It seems like it’s become a race for partnerships, which is sort of weird. Is that what’s happening?

Yeah, and we kicked that off last summer when we did the Orlando Magic deal. First ever partnership in the space with a team or league. And once one deal happened, it was open season for the NBA. And then NHL, MLB all said, “Wait a second…” And now pretty much every pro team in the three main sports has partnered with one of us.

Are you sick of being asked about DraftKings by now?

What I say is, look, we’ve always had competitors, from very early on, when we launched in 2009. And competitors have always been really good for us. It creates category awareness. If you look at DraftKings, we’re definitely competing for the same customers, but there are 57 million people that play season-long fantasy, and we’re both going after that 57 million. So it’s more of a race than a war. It’s not a war of attrition for the same customers. We’re competing more for those people than for each other’s customers. Market share is important, but unit economics is more important. If it’s a tradeoff, I’d rather build a really good business than fight over a few percentage points of market share.

Why is FanDuel better?

From a consumer perspective, we orientate towards the more mass-market, casual fan. We would say it’s faster to understand our product. They focus more on the hardcore users. They would say, “Hey, we’ve got all these special features that FanDuel doesn’t.” And hey, there are some users that’s great for, but for the mass-market you don’t need that. They would say, “We have more sports,” and that’s fine, yes they do. But for basketball and football, we’ve gone deeper.

Was it a big loss for you when they got that big ESPN partnership?

The one thing I would say about that is there’s a shift in media that’s happening, which is consumption is moving to mobile. One of the things we are more allergic to is committing to multi-year deals on an analog format. I think they’ve been much more aggressive on it. So when we look at deals like that, we’re less committed. I’m very comfortable where we are; we’re more committed to growing tech platforms like Google, which is an investor in us. ESPN is a great property, but as we look at a three or four=year time horizon, would I feel comfortable having hundreds of millions committed to them as media shifts to mobile? Or would I want to have flexibility to put my media dollars where it works? So, they’re betting big on ESPN and Fox. We want to stay more flexible.

How about Yahoo launching its own daily platform this year, does that worry you?

With Yahoo, we always said, “If they come in early, they absolutely can crush us.” But we always knew that Yahoo would want to build it themselves. It’s an engineering company. Whereas ESPN is not a tech company, so it didn’t surprise me that they went with DraftKings. But we always said we would have to compete with Yahoo and ESPN. So yeah, Yahoo built a product that’s reasonably good. I’ve tried it out. But we feel we have a better one.

You’ve tried out DraftKings too, I imagine?

Yeah—with DraftKings I seem to lose all the time.