Great craft beers that you should try 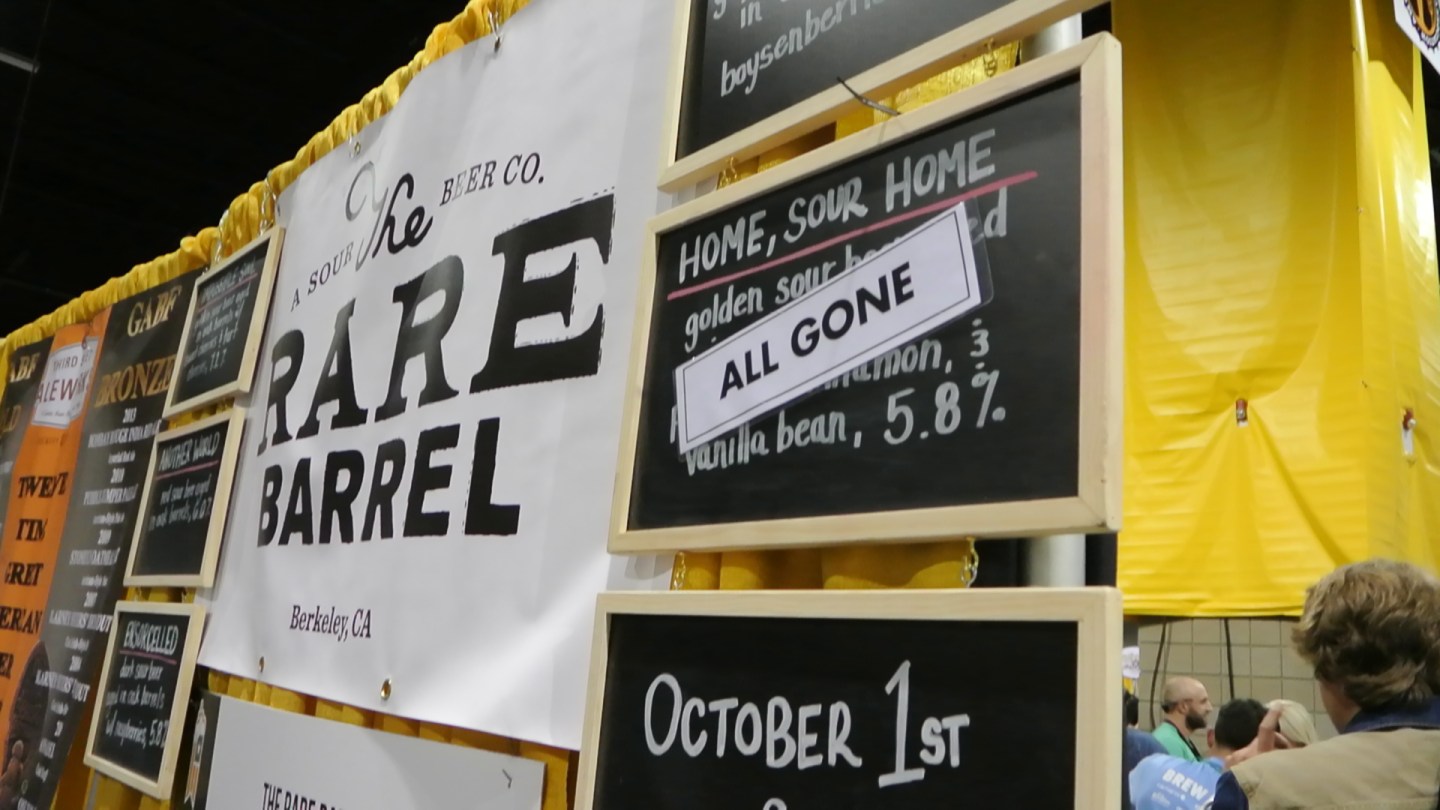 No matter how big a fan of craft beer you may be, the Great American Beer Festival can be an intimidating place. There are so many selections available – and so many styles – that it’s easy to get overwhelmed by the over 3,500 beers being poured.

Certainly there were long lines at the breweries you’d expect at an event like this. Russian River, Cigar City, 3 Floyds and several other familiar names were mobbed from the moment the doors opened – and often ran out before the night was over. And while they all poured some terrific beers, I managed to find a few others at the show that should be on your radar if they’re not already – and a few that might not reappear, but certainly deserve mention.

So, now that the masses of GABF have voted their fan favorite beers (as judged by how long they were willing to wait in line) and the Brewers Association has named its best beers of the year, I’ve got my own list of favorites from this year’s show:

The Rare Barrel’s Ensorcelled – The Rare Barrel proved to be one of the most popular brewers at GABF this year, as people repeatedly lined up to taste its variety of sours. All of them were fantastic, but for me, Ensorcelled stood above the rest. It’s a dark sour aged in oak barrels with raspberries. Wonderfully balanced, it’s a rich, medium-bodied beer that finished quite dry. Refreshingly tart, it never overwhelms you – which some sours might. (ABV: 5.8%)

Port Brewing’s Churchill’s Finest Hour – What was surprising about this imperial stout wasn’t its incredibly smooth, silky taste. Nor was it especially shocking that it’s perfectly balanced, not leaning to heavily on either the chocolate or coffee. What was amazing was that this whale, which people have been known to stand in line for up to 17 hours to get a bottle, had virtually no line to try a sample. My guess is that people who found it, like me, were reticent to share the information, so they could go back to get more. (ABV: 14%)

Hops & Grain’s A Pale Mosaic – Hops & Grain is one of the most underrated breweries in Austin, consistently putting out incredibly nuanced beers. The company’s “The One They Call Zoe” is a favorite of mine, so I jumped at the chance to try their latest release. A Pale Mosaic is another grand slam, deftly balancing the hops and malt and finishing with a trifecta of dry hops. It’s a pale ale with a piney taste, but not one that’s overwhelming. And it finishes remarkably clean. (ABV: unk)

Bagby’s Asphalt Jungle Dry Irish Stout – A pitch black stout, this one might be intimidating to people who shy away from dark beers, but it’s wonderfully smooth – full of roasted malts and has a very, very clean finish. It’s not a coffee beer and it’s not a chocolate beer. Instead, it’s something that will appeal to people who enjoy a good Guinness. The hiccup? If you want one, you’ll have to visit the brewer’s Oceanside, CA pour house, since it’s not bottled. (ABV: 4.7%)

NoDa Par 4 – Charlotte’s NoDa makes one of the best IPAs in the Southeast, so I’ve been eagerly awaiting their take on a Session. Par 4 is loaded with rich, hoppy flavors, but they don’t linger on the finish. Hop Drop & Roll might be the company’s flagship beer, but given the quality of this one and the ever-increasing demand for session IPAs, Par 4 could be their big moneymaker if they make it a year round offering. (ABV: 4%)

Black Project Dreamland (Blueberry) – Do you have any friends in or near Denver? If so, it’s time to set up a trade. Black Project is an artisanal brewer of wild ales – and a side-venture of Former Future Brewing Company. And its beers go fast – real fast. Dreamland (Blueberry) is a well done sour that’s not as sweet as you might expect (given that the batch was infused with 84 lbs of the fruit). It’s a zippy beer that will turn the heads of fans of the style. (ABV: 5.7%)

Aftershock’s Oatmeal Raisin Cookie Ale – Sweet beers aren’t for everyone. Heck, I’m generally not a fan of them, but I do love oatmeal raisin cookies, so when Aftershock won a medal for this blonde ale, I had to get a taste. And I loved it! The oatmeal is a pretty easy ingredient to replicate in beer, but the way Aftershock nailed the other ingredients without making something cloying borders on magical. It’s something truly unique – and after a small sample, I’m on a mission to find more and pair it with an actual cookie to see if my brain was simply fooling me. (ABV: 5.5%)

Avery Raspberry Sour – Talk about a mouthful! This luscious sour is a nuanced balance of tart raspberries and crisp acidity. There’s sweetness amongst the sour. There’s an earthy quality. And there’s a warmth you wouldn’t expect. Think a raspberry champagne, but without the sometimes-syrup-y qualities of a framboise. (ABV: 6.5%)

While there were plenty of other brewer-made beers I could add to the above list (Russian River’s Gold medal winning STS Pilsner, Upland Brewing Co.’s Sour Reserve #6 and Prison City’s Cherry Poppins all absolutely deserve a shout out, for instance), two of the biggest surprises for me came at the Pro-Am booth. Entries in this competition are amateur recipes, though the homebrewers work with a pro brewery sponsor to create (and likely tweak) the beer.

Neither of the two I sampled won a medal, but both were daring examples that captured my attention.

German Hefeweizen with Lemon Zest and Raspberries (from Troy Leck and Yak & Yeti) – The ratio of sweet and tart in this hefe was remarkably well balanced. The lemon and raspberry rode atop the wheat tastes without decimating the light qualities of the beer. It showed a deft hand – and seemed quite popular with other tasters.

Belgian Pale Strong Ale with Carrots (from Juli Goldenberg and Stone Brewing Co.) – This was one of those pairings that sounded way out on the spectrum if you simply read the card. But Stone’s not afraid to dance along the line of sanity and after one sip, it was clear this was a beer to be reckoned with. The sweetness of the carrots works terrifically with the Belgian yeasts. The beer started with vanilla and spice and the bready qualities you expect from a Belgian, but the carrots then took charge, giving the beer a sweet, earthy finish.