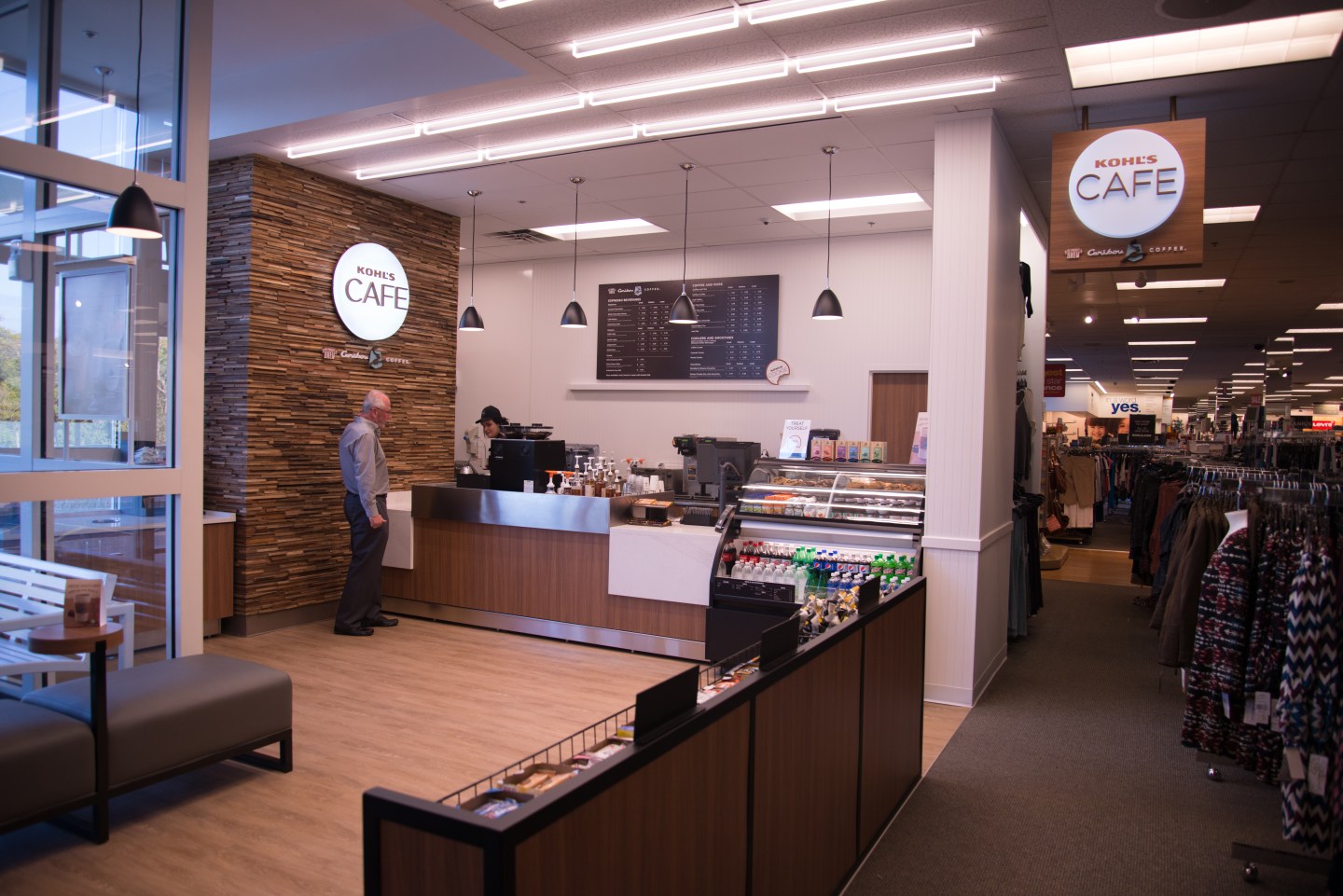 Looking to spruce up its shopping experience, and reinvigorate its turnaround, Kohl’s (KSS) is testing small cafés at two of its 1,166 department stores.

The retailer is known primarily for its sensible, no-frills stores that offer quality products at affordable prices. But its neat, well organized emporia don’t really give shoppers many reasons to hang out and spend time, something that would raise the odds they’d spend more while there.

So at two stores not far from its headquarters in Menomonee Falls, Wisconsin, on the outskirts of Milwaukee, Kohl’s will be trying out selling lattes, cappuccinos and other upscale coffee products. The idea is to drive traffic at a time the retailer is attempting a big turnaround to so far middling results. In its most recent quarter, Kohl’s comparable sales were up a mere 0.1%, better than Macy’s performance, but slower than the two preceding quarters.

“Kohl’s is committed to providing an easy and inspiring shopping experience and part of this includes exploring new or different ways to engage our customers and their families within our stores,” said Jon Grosso, Kohl’s EVP, Director of Stores in a statement.

While Kohl’s isn’t known for coffee, its second in command, Chief Merchandising and Customer Officer Michelle Gass is: she came to Kohl’s two years ago after a star turn at Starbucks (SBUX), where among other achievements, she played a key role in developing its industry leading mobile payment and loyalty app.

Gass, second in command at Kohl’s and one of two candidates to eventually succeed CEO Kevin Mansell (the other candidate will be a still unnamed operations chief), is helping her boss oversee what the retailer calls its “Greatness Agenda,” Kohl’s-speak for getting back to its once robust growth. It specifically means adding $2 billion in total sales by 2017 after a period of stagnation. (Last year, Kohl’s total sales were $19 billion, making it the No. 9 retailer in the country excluding grocers.)

So to do that, Kohl’s has been overhauling its in-store experience, adding beauty sections to hundreds of stores and focusing a lot more of wellness products, particularly activewear, as well as adding more fashion to its clothing. But Kohl’s is up against rivals doing the same thing: Target (TGT), which hosts Starbucks cafes in its stores, is also upping its beauty and wellness game. Macy’s (M) is making similar moves.

The test cafés will feature Caribou Coffee items, along with grab-and-go snacks such as granola bars, breakfast bars, chips and cookies. Kohl’s would not say how long the Kohl’s Cafés will remain in stores and said that as of now, it has no plans to expand this café test to other locations, though it said it may.