The John Oliver Effect: Why the British comedian’s impact is no joke 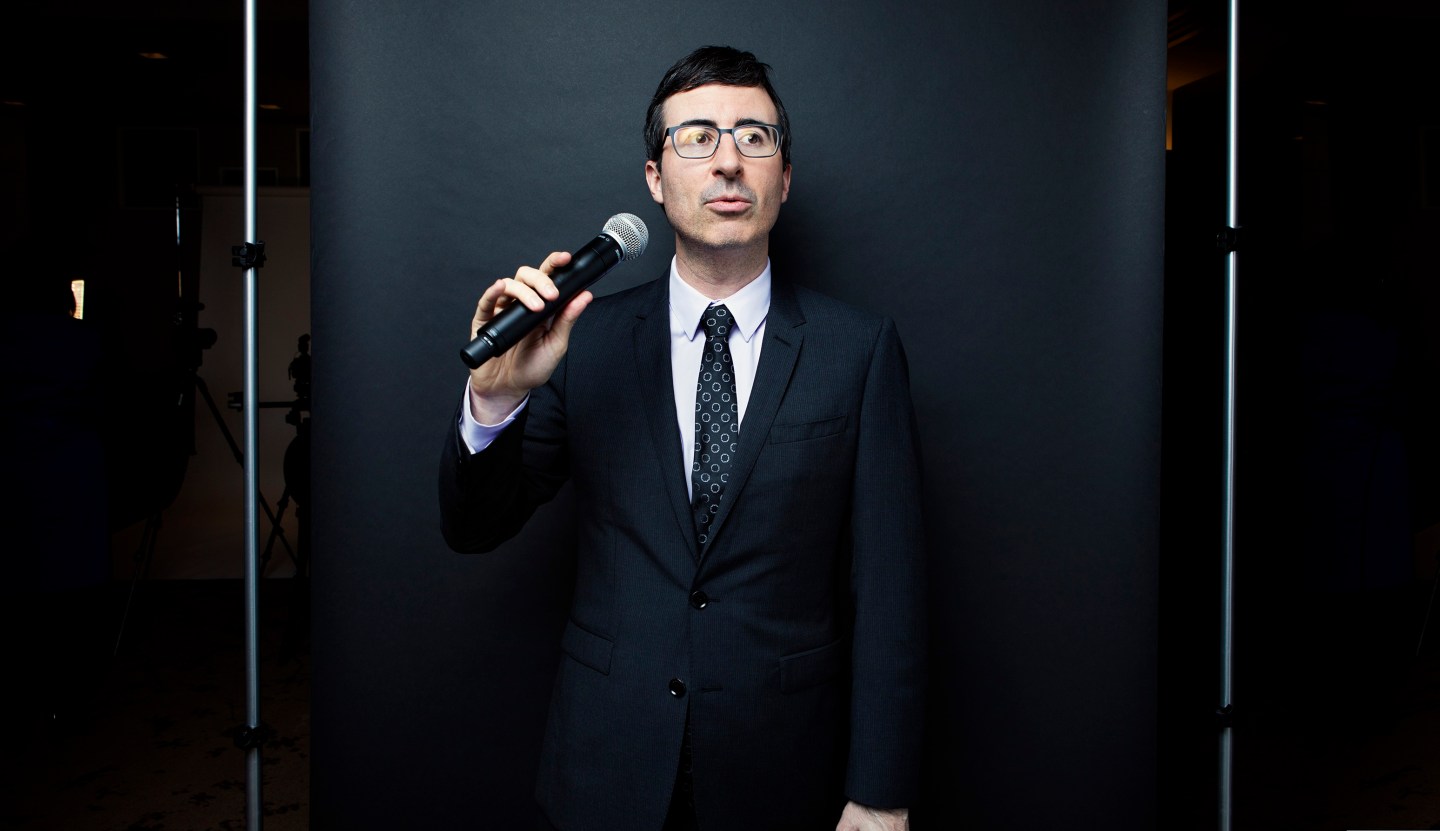 John Oliver denies that he’s a journalist, but the impact of his HBO show Last Week Tonight could very well be the envy of most newsrooms around the country. Every Sunday night that an episode airs, Oliver reserves a chunk of time for a thorough dive into meaty subjects that don’t always receive the attention they should. With his signature humor, Oliver convinces his audience that they should care about these complex topics and often signs off with a call to action. The result is what Time has called the “John Oliver Effect,” in which the British comedian helps—in ways both big and small—to create very real change. This level of influence is what landed Oliver, who in addition to the show’s host is also an executive producer, on Fortune‘s 2015 40 Under 40 list.

Oliver is the first to admit that net neutrality can be a mind-numbingly dull topic. “The only two words that promise more boredom in the English language are ‘featuring Sting’,” he said during the segment. His explainer outlined how the Federal Communications Commission was rethinking the principle that all content on the internet should be treated equally.

He also called out how the cable industry’s former top lobbyist, Tom Wheeler, is now running the agency regulating it—what Oliver equated with needing a babysitter and hiring a dingo. He ended the segment by calling for internet trolls everywhere to submit public comments to the FCC: “Seize your moment, my lovely trolls,” he said. “Turn on caps lock, and fly, my pretties!” He got his wish: Following the show, a flood of new comments led to major glitches for the FCC website.

Bonus: When asked about the segment during an FCC open meeting, Wheeler responded, “I would like to state for the record that I’m not a dingo.”

When Last Week Tonight got wind of the Miss America Pageant’s claim that it’s the largest provider of scholarships for women, the crew decided to investigate. The resulting episode alleged that although the $45 million the pageant claimed to give in annual scholarships to women was grossly overstated, the amount was still more than any other women-only scholarship Oliver and his team could find.

Oliver encouraged viewers to donate to alternative scholarships for women if they wanted to “change the fact that currently the biggest scholarship program exclusively for women in America requires you to be unmarried with a mint condition uterus, and also rewards working knowledge of buttock-adhesive technology—which is just a little bit unsettling.”

After the episode aired, one of the organizations that got a shout out in the segment, the Society of Women Engineers, told the Chicago Tribune that in just two days it received some $25,000—equivalent to 15% what it normally receives from individual giving annually.

Oliver kicked off his October 5, 2014, episode on civil forfeiture by admitting that the term is a little wonky and “sounds like a Gwyneth Paltrow euphemism for divorce.” But he went on to explain why the legal process, by which government officials can take property from people without convicting them with a crime, is not to be taken lightly. Oliver cited one example in which a single program in place since September, 11, 2001, had seized $2.5 billion. “It’s not you that’s on trial,” he explained. “It’s your stuff.”

And many police departments are allowed to keep much of what they seize. He pointed to a case in Texas where the police department had bought a margarita machine with the money. “They were literally using this money as their own personal slush fund,” he said.

The episode aired in October, and in January Attorney General Eric Holder put in place major restrictions on civil forfeiture laws. Further limits were announced in March. (Granted, a Washington Post investigation might have had something to do with it, too.)

In May, Oliver took on the chicken industry in a nearly 20 minute piece. He laid out how chicken farmers at the mercy of giant processors like Tyson barely make a living. The segment explained how the big processors not only rank farmers against one another—giving bonuses to the top producers and taking deductions from the bottom half—but also strike back against those who speak out against the system.

Moreover, provisions meant to shield the chicken growers had been rendered useless by politicking. For years, a rider inserted into the House Appropriations Committee’s agriculture bill blocked the U.S. Department of Agriculture’s ability to protect the farmers, and Oliver mock-threatened public shaming of representatives who support its inclusion.

But when the committee approved the 2016 bill, the rider was absent for the first time in four years.

There are about 4 million people, who live in U.S. island territories including the Virgin Islands, Guam, and Puerto Rico. In March, Oliver drew attention to this population’s lack of the right to vote due to the “Insular Cases” of the early 1900s, which do not give complete Constitutional rights to those living in U.S. territories.

He highlighted how, despite the fact that Guam has a U.S. base covering a quarter of its land and that one in eight of its residents is a veteran (the highest of all U.S. states and territories), it is ranked last in per capita spending on medical care for vets. In America Samoa, those hailing from the islands are not even considered American citizens—even though the territory is home to the top army recruiting station in the country.

A judge in the court of appeals for the Ninth Circuit must have caught the episode. In her opinion on a class action case brought by the people of Guam over a tax refund program, she cited the episode and wrote that the Insular Cases have been “the subject of extensive judicial, academic, and popular criticism.”

In June, Oliver tackled bail and how it’s become what he described as “a way to lock up the poor, regardless of guilt.” He pointed to a 2013 analysis that found that nearly 40% of New Jersey’s prison population is held only because of its inability to meet bail.

He outlined how the choices for many go from bad to worse: plead guilty even if you’re innocent, but then face having a prior conviction on your record; hire a commercial bail bondsman, who keeps your money no matter the outcome of the trial; or sit in jail—a daunting prospect, especially for those will be fired if they’re absent from work. “The current bail system makes no sense, and it does a lot of harm,” he said.

A month after the episode aired, New York City Mayor Bill de Blasio announced an initiative in which low-risk offenders would be released under a supervisory program rather than face bail or jail time.