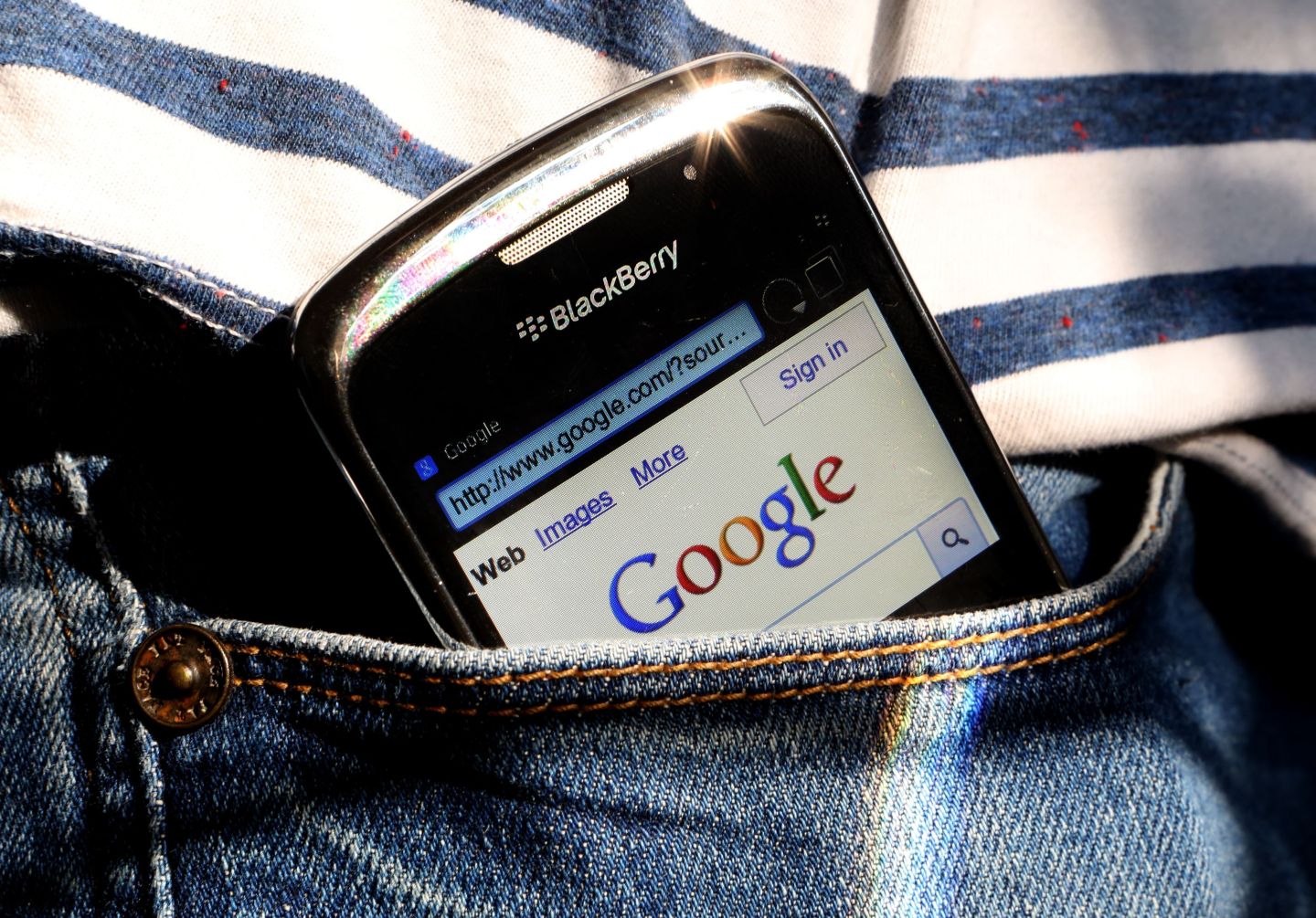 Google 15th birthday. A BlackBerry phone showing the Google search engine home page as the internet giant celebrates it's 15th birthday today. Picture date: Wednesday September 4, 2013. The firm has come a long way since September 4 1998, when it was incorporated by founders Larry Page and Sergey Brin, who had met at university three years previously. It was originally called BackRub, but they eventually settled on the name for the website that has become synonymous with internet searching today - so much so that it is used as a verb in its own right. See PA story TECHNOLOGY Google. Photo credit should read: Chris Radburn/PA Wire URN:17491205
Photograph by Chris Radburn — PA Wire/AP

After much speculation and hopes that BlackBerry would release an Android phone, the struggling business device maker finally caved to the pressure on Friday, announcing a new smartphone that runs on Google’s app-friendly operating system instead of BlackBerry’s increasingly obsolete software.

BlackBerry (BBRY) CEO John Chen explained in a CNBC op-ed why he had ultimately decided to make the Android smartphone, called Priv, after long insisting that the company was “committed” to its own operating system.

“For those restraining excitement until rumors became reality — the day has come,” Chen wrote in the article, acknowledging that some people would react “to this news with surprise.” He explained, “Priv will be the answer for former BlackBerry users who miss the physical keyboard but needed apps.”

Chen emphasized the security protections with Google’s (GOOG) Android platform, writing that “in today’s hectic world, where cyber threats are real for everyone…Priv will be the solution for smartphone users who are learning daily of the lack of privacy they have on their current devices.”

But BlackBerry will not abandon its legacy operating system entirely: “I want to be clear: fans of BlackBerry’s workhorse BlackBerry 10 smartphones can continue to depend on us,” Chen said, citing “continued demand” for its older “flagship” products. “They’re not going away.”

And to the many observers who declared BlackBerry nearly dead long ago, he stressed that the reports of its death have been greatly exaggerated, expressing optimism in its new strategy:

For nearly two years now, I’ve been telling you how we would transform the iconic BlackBerry brand into a true software powerhouse. We’re doing this by integrating our strength in building the most secure software and network and embedding it into a one-of-a-kind form factor.

BlackBerry is a new company. We have new life. And we plan to continue to surprise our customers and the industry. This is just the latest move along that path.