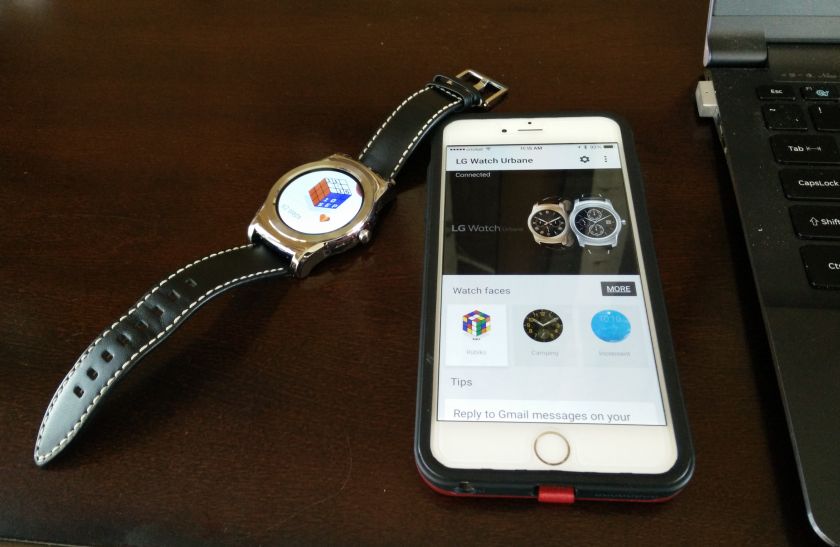 Until last week, anyone looking to pair a smartwatch with an iPhone had two primary choices: The pricey (yet flawed) Apple Watch, or the more affordable (but also flawed) Pebble Time.

Then Google (GOOGL) unveiled an Android Wear app for iOS, thus opening the door to a wealth of new watches that were previously iPhone-unfriendly. That list includes the $350 LG Urbane, the $349 Huawei Watch, and “all future Android Wear watches,” according to Google. Among them is the $199 Asus ZenWatch, which is due to go on sale this month. There’s also anecdotal evidence that earlier Android Wear devices, such as Motorola’s original Moto 360, can pair with an iPhone, albeit with some limitations.

As an iPhone owner somewhat frustrated by current smartwatch options, I was excited by the announcement—but also curious. Why would Google decide to support a competing platform? According to Ramon T. Llamas, IDC mobile device analyst, it’s all about market share: “[It’s] an acknowledgement on Google’s part that in order to expand its total available market, it has to reach into other platforms, and that includes iOS,” Llamas said. “It’s a smart move given that the market is still in its initial phases, and not everyone who owns an iPhone will necessarily want or can afford an Apple Watch.”

So how does an Android Wear device rate when paired with an iOS device? To find out, I spent nearly a week wearing LG’s Urbane, a round beauty that elicited more than a few “nice watch” remarks from friends and strangers alike. I was eager to see how far Android Wear had progressed in the past year, so I installed the eponymous app on my iPhone 6 Plus, then strapped on the Urbane.

Once again I was dazzled by the hardware: a beautiful silver bezel surrounding a gorgeous display, one capable of displaying some equally gorgeous watchfaces. Most of the 18 preloaded faces deliver elegant, Rolex-flavored styling, with analog hands and Roman numerals. But where was Mickey Mouse? Where was the info-packed LCARS interface to stoke my inner “Star Trek” nerd? Thankfully, I did find a smattering of colorful, eclectic, and fun alternatives within the Android Wear app.

Alas, actual watch apps were nowhere to be found, and here we arrive at the first key limitation of Android Wear on iOS: no support for third-party anything. No extra apps, no additional watchfaces beyond the handful curated by Google.

“Google… has roughly 4,500 applications and about 1,700 watchfaces for Android Wear,” said Lllamas. “[But] if you’re an iPhone owner, you’ll miss out on all the fun. Applications raise the value and utility of a wearable device. If you can’t access the app library, you can’t raise your watch’s value or utility beyond what is already there. That’s what will make it an uphill climb for Google.”

Though bummed about the limited watchface selection, I didn’t really mind the app void. As I mentioned in my review of the Pebble Time Steel, it’s notifications I crave: I want my watch to tell me who’s calling or texting, in part so I don’t miss something important, and so I know whether I need to pluck my phone out of my pocket. Everything else—sleep monitoring, step tracking—is fluff I won’t use.

Fortunately, Android Wear does a decent job on the notification front, although owing to Apple-imposed limitations, it’s largely a one-way affair. Users can read the contents of a text message, for example, but can’t send a reply via the watch. Likewise, because Android Wear links into Google Now, not iOS, you can’t get all Dick Tracy and tell your watch to send a message or make a phone call.

You can, however, reply to Gmail messages. You can also say “OK, Google,” then run a Web search, add a reminder, or schedule an appointment—though these latter items will be added to Google’s apps, not their iOS counterparts. Android Wear also provides music controls, including a pop-up play/pause button that appears when you start listening to something on your iPhone and a more complete control pad if you swipe left.

Android Wear on the whole, however, remains a vexing experience. For example, at seemingly random times the Urbane decided to show me how many steps I’ve taken. If I dismiss the little pop-up, it reappears again later—but then seems to vanish for long stretches. And, although certain aspects of the operating system seem straightforward enough—like swiping in a particular direction to perform a particular task—I frequently found myself lost in a sea of menus or notifications. It’s just not intuitive.

The hardware isn’t perfect, either. When I raise my arm and turn my wrist, there’s a slight delay before the screen flickers to life. That may sound a trivial complaint, but when you look at your watch, you want to know what time it is now, not a second or two from now. And, sometimes the accelerometer doesn’t register the movement, so I’m left staring at a blank screen for several beats before realizing I’m going to have to tap it. Visibility is poor outdoors, and battery life remains so-so at about two days (if you disable always-on mode).

For all my complaints about Android Wear’s learning curve and limitations, I still like the platform. It’s just not a good fit for iOS, at least not yet. Right now, Apple’s (AAPL) smartwatch is the only wrist-mate that truly integrates with iOS, and it remains an expensive, battery-challenged proposition. Google needs to code its way to a better Wear experience and hope that a new wave of affordable Wear watches can claim a lot more wrists.

For more news about Google, check out the following Fortune video: