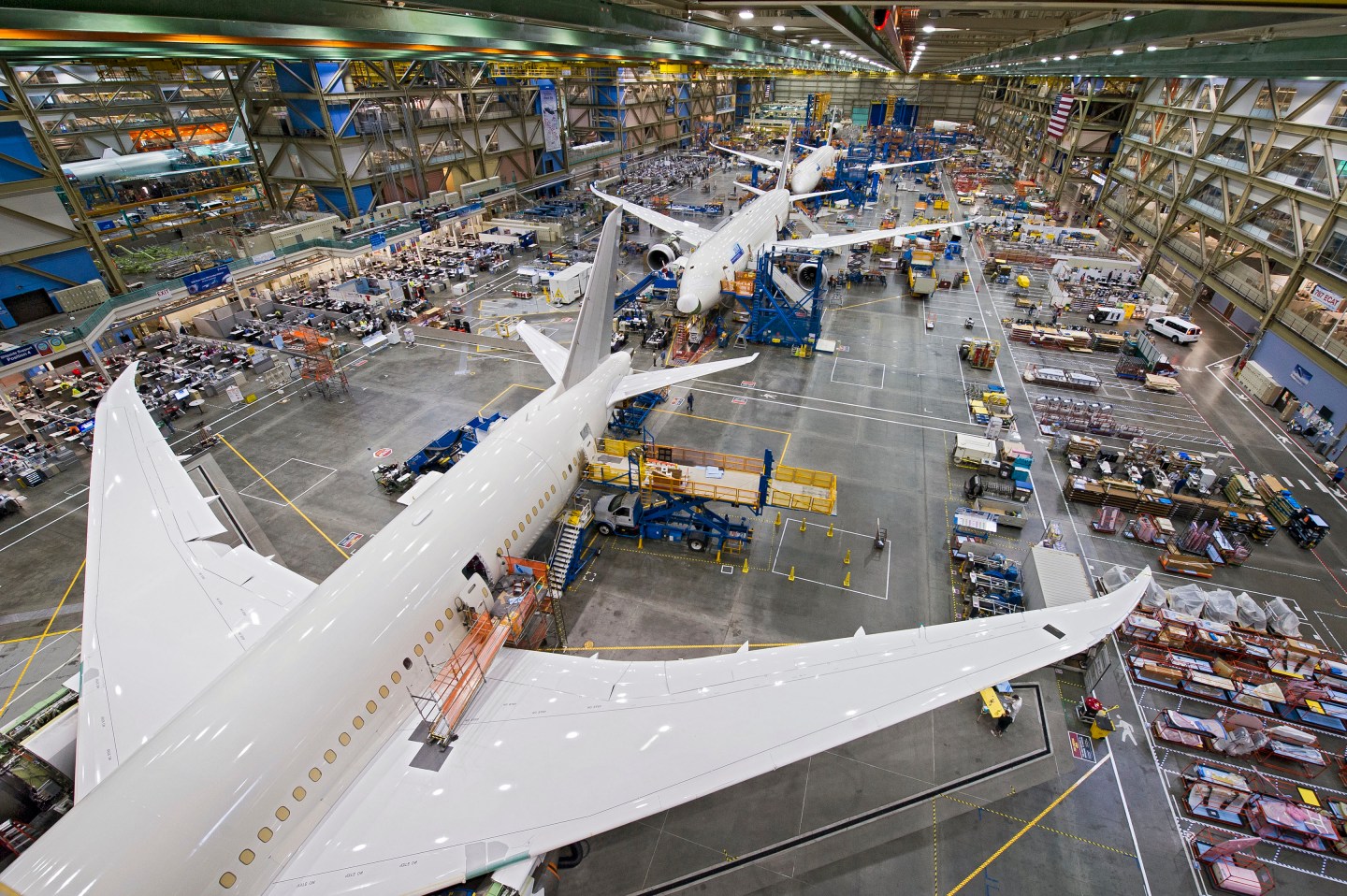 The Boeing 787 factory in Everett, Washington.
Courtesy of Boeing

In the months leading up to an expected vote to reauthorize the U.S. Export-Import bank, Boeing (BA) did what large corporations with lots of cash and deft political maneuvering skills often do so well. It spoke softly and lobbied hard, scattering a few pro-Export-Import soundbites from high-ranking officials where members of the media would find them and while spending millions on those representing its interests on Capitol Hill.

But on June 30 Congress let Ex-IM (as the agency is often called) expire without renewal. Compounding Boeing’s misery and defying the predictions of many pundits, Congress then broke for August recess without taking up Ex-Im’s renewal again. Without a vote, Ex-Im—which guarantees loans for foreign customers to buy U.S. goods like Boeing aircraft—remains unauthorized.

Now, with Congress out of session and Ex-Im increasingly a political football, Boeing and pro-Ex-Im allies like GE are changing tack, lashing out vocally, pulling political donations from opponents of the credit agency, and threatening to move American jobs overseas if Ex-Im isn’t renewed.

A more assertive Boeing signals a change in tactics for the supporters of Ex-Im, which include the U.S. Chamber of Commerce and other major U.S. corporations like General Electric (GE) and Caterpillar (GE CEO Jeff Immelt has also threatened to export jobs if Ex-Im is not reauthorized). And as members of Congress entrench themselves for the upcoming political cycle, the question is whether Boeing’s heavy-handed approach will pay off.

“I didn’t expect them to double down on it the way they have,” says Richard Aboulafia, vice president of Analysis at Teal Group. “Originally they did the usual end-of-the-world-as-we-know-it, cats-and-dogs-living-together-in-sin kind of talk to motivate renewal. But I thought when they didn’t get that they would say ‘it’s not that bad, our business is sound.’ Instead they’ve been doubling down on the apocalypse.”

The apocalypse scenario that Boeing is spinning has little to do with near-term financing for its customers, but instead focuses on the company’s long-term competitiveness without the financial backstop provided by Ex-Im. “This is not something that creates near-term financial risk for Boeing,” said Boeing president and chief executive Dennis Muilenburg on a July 22 earnings conference call. “There are multiple commercial credit sources available today that the market is sound there … In the current financing market, that doesn’t create risk for us. This is about long-term global competitiveness. And that’s why we’re so forceful on this topic that it’s important Ex-Im be reauthorized.”

The Export-Import bank is the United States’ export credit agency, one of many around the world that guarantees loans taken out by foreign companies to purchase goods exported from that country.

For example, in April, Iraq requested financing for 10 Boeing 737 airliners. Commercial banks would generally be cautious about lending hundreds of millions of dollars for airliners to a country where the future remains uncertain. Normally in this situation Ex-Im would review the financing request and, if approved, would agree to backstop the loan, assuring creditors that if Iraq fails to make payments, the U.S. government will make good on the money lent. Boeing would get the sale and the U.S. jobs that go along with it, and Iraq would gets the needed airliners.

Historically Ex-Im has done very well for the U.S., earning a net profit as income from issuing loan guarantees has exceeded payment for loan defaults. Typically its renewal sails through Congress without much debate. But lately a contingent of Tea Party identifiers and other conservative Republicans have turned away from Ex-Im, labeling it “corporate welfare” and calling for Ex-Im’s role to be absorbed into the private sector.

That’s a problem for Boeing, which is by far the largest beneficiary of Ex-Im’s loan guarantees. In 2014, 14% of Boeing’s total orders were to customers backstopped by Ex-Im guarantees, totaling billions of dollars in business. For its part, in that same year Ex-Im issued $20.5 billion in guarantees, making $675 million in the process.

According to data compiled by Maplight, a nonpartisan research group that tracks money’s influence on politics, Boeing spent roughly $16 million per year in each of the last four years lobbying Congress. This year, the company spent $13 million in just the first six months, spending more than $9 million in the second quarter alone as Ex-Im’s expiration approached.

Thus far all that lobbying money doesn’t seem to have swayed Congress, and Boeing and its pro-Ex-Im allies have clearly shifted tactics. Since Ex-Im’s expiration—and especially since Congress broke for summer recess without putting Ex-Im’s reauthorization to a vote—Boeing and GE have ceased contributing to more than a dozen top Republicans that oppose Ex-Im, all of which received contributions from the companies in 2014. Further, Politico reports that an additional 17 opponents of Ex-Im that received financial support from one of GE’s political action committees in 2014 have received nothing from that PAC in 2015.

They’ve also turned up the rhetoric, with CEOs of both companies making vocal threats to shift jobs overseas and playing up the drag that a world without Ex-Im could have on long-term global competitiveness. There’s also some indication that Boeing and its allies are correct. Since the expiration of Ex-Im on June 30, Boeing has already lost at least one sizable chunk of business as Asia Broadcast Satellite (ABS), a Bermuda-based telecommunications company, canceled an $85 million satellite manufacturing deal. Citing the loss of Ex-Im’s charter specifically, ABS has said it is now considering options outside the U.S. that could receive support from a foreign export credit agency, though talks with Boeing continue.

Long-term, Boeing argues, that trend could continue. Pulling Ex-Im’s authorization creates an uneven playing field, the bank’s supporters say, because other countries have their own export credit agencies (ECAs) that will step into the void left by Ex-Im, pulling lucrative contracts—and eventually jobs—away from the U.S.

Many other countries’ ECAs are in fact even less restrictive than the American Export-Import Bank. While Ex-Im rules dictate that the bank won’t finance a percentage of a loan greater than the total percentage of U.S. content in any given product, other ECAs in places like Japan and Europe aren’t limited in the same way. Canada’s ECA can provide loan guarantees for pretty much any product regardless of the percentage of Canadian content as long as the bank can demonstrate that it’s in Canada’s national interest.

In that way Boeing and GE’s indications that they might move jobs overseas in the future could be more than an empty threat. The companies could seek financing from less-restrictive foreign ECAs, offering to slowly move jobs to those countries in exchange for financing help. But even if the threat is real, it’s far less clear whether using such means to pressure Congress is a good idea.

“What is the best way to deal with this kind of political current,” Aboulafia says. “Do you try to intimidate and cajole, or do you try to educate and negotiate?”

Escalating the rhetoric—particularly as the election cycle spins up—could push those legislators looking to prove their conservative, free market bona fides to take a harder line against Ex-Im and further entrench themselves in their anti-renewal positions.

“From a political strategy standpoint this seems counterproductive at best,” Aboulafia says. “It lacks credibility and looks amateurish. Having said that, they’re still right. It would be a good thing to renew from an American industry standpoint.”