How to fire people with dignity 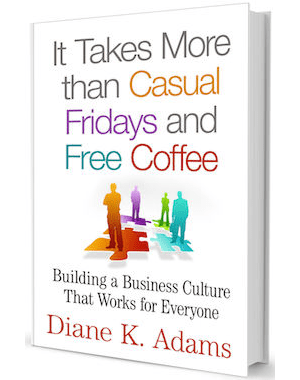 Nobody wants to fire anyone, but sometimes it’s your only choice as a manager. In the following excerpt from her new book, It Takes More than Casual Fridays and Free Coffee, Diane K. Adams shows you how ease some of the pain for everyone.

Bob had worked at his company for seven years. He was a great guy. Everyone liked him. But the company felt his job performance wasn’t up to par and decided to release him.

As unfortunate as it is to lay someone off, tough staffing decisions—including layoffs—are an integral part of doing business. No company can afford to foot the bill for employees who don’t carry their weight, or to pay huge salaries for routine work simply because that person has been in the same job so long. That happens all the time with companies that don’t pay attention to strategic staffing issues.

In Bob’s case, the problem wasn’t that his company had to let him go. It was how the company went about firing this long-time loyal and honest employee. The company didn’t take the typical approach of first trying to work with the employee—in this instance, Bob—to help him improve, or even establishing a record of his poor performance that included warnings, follow-up memos, and so on as protection against any legal repercussions of his ouster.

Instead, one day Bob’s manager called him into her office and told him, “You’re fired. The security guard outside will escort you to the door. We’ll send you your things.”

That was it. No warnings, no respect, no dignity, no integrity, and no explanation. This sounds unbelievable in today’s workplace, in which companies usually worry about repercussions that can accompany employee firings. But rules, regulations, and fear of lawsuits or not, this kind of disrespect is a very real problem that happens all too often.

At this writing, it’s the beginning of 2015, and already a similarly dismissed and disgraced employee of another company has complained to me about the same scenario. She told me her boss called her into the office on the pretense of a sales meeting, told her she was fired, took away her computer, and told her to leave the office immediately. The employee said she was given no warning, no explanation, and no opportunity even to contact her clients about pending deals.

That kind of dismissal isn’t acceptable. Most any individual—barring those who have flagrantly violated stated codes of conduct—should have the opportunity to leave with dignity.

Pay attention to firing. How you fire someone—whether a single person or tens of thousands of people at once—is as important as how you hire them. That’s because of the message this action conveys at a time when everyone is watching.

Successful companies respect their employees and always treat them with integrity. Without provocation, Bob’s company kicked him to the curb. He wasn’t allowed to go back to his office, sign off his computer, clean out his desk, or even say goodbye to any of his colleagues of the last seven years. That was how this company treated a loyal employee!

Clear, negative message. Worse still, those kinds of actions send a clear message to the company’s other employees and to its customers and the community: “We don’t care about you or anyone else.” At the bottom line, these kinds of actions torpedo morale because no one wants to go the extra mile for, or be associated with a company (and its products or services) that doesn’t care.

At one point Cisco Systems (where I was once the VP of human resources) determined that layoffs were prudent and necessary to survive changes in the industry and the economy. The idea of layoffs was especially tough because of the company’s strong culture that emphasized teamwork, collaboration, and social responsibility.

Positive spin. The Culture and Talent team there came up with a unique and positive spin on what could have been a much less palatable situation. The company provided a generous severance package that included cash as well as job-placement assistance. The best aspect of the package was that all 2,000 employees to be laid off were given an additional option. Instead of taking the severance package, they could work one year at a nonprofit organization of their choice and receive 50 percent of their salary—plus the severance bonuses, insurance coverage, and so on—while doing so.

Kudos for Meaningfulness. That’s one of the most creative, values-based approaches to layoffs that I’ve ever seen. The company treated its departing employees with dignity, integrity, and respect, while maintaining alignment with its core values. What a great way to give departing employees a paid and important purpose while they look for a new job.

How you can lay off employees with dignity

Not every company is as big as Cisco or can afford large severance packages, or to carry an employee at half-salary for one year. But you can and must treat your departing employees—whether one, 100, 1,000, or more—with respect, honesty, integrity, and above all, dignity.

I’ve had to lay off individuals many times at different companies. Unless there’s a specific reason not to trust someone, escorting them out the door á la Bob’s experience is NOT how to do it.

Saving face and with grace. In Bob’s case, he had been a loyal employee. A better approach to releasing him would have been to give him either 24 hours to leave or the option to let his team know he was leaving and then stay another week. That would have allowed Bob to save face and leave in a respectful manner. And that would have conveyed the message to others that the company cares and values its employees.

For example, he or she should understand it’s not acceptable to badmouth the company. One way to ensure that happens is to link the employee’s compliance with that responsibility to his or her receipt of a portion of the severance package. That motivates the departing employee to keep his or her comments to him- or herself before and after he or she has left.

The bottom line is that when someone must exit your company, the situation should be handled with respect and aligned with the positive values that are the foundation for your company’s culture.

The Importance of Caring. In case you think the idea of backlash is an overreaction, consider how you would feel if you were an honest and loyal employee, and your employer unceremoniously told you to get out. I’m sure you wouldn’t think too kindly of that employer. And how would your fellow employees feel if you were booted out?

I know from experience that they wouldn’t harbor much loyalty to the employer or willingness to go the extra mile for a company that had so little respect for individuals, especially for someone who had given so much to the company for so long.

When a company doesn’t care, neither do its employees. Customers feel this attitude, too, and it’s only a matter of time before performance, product, and balance sheets suffer.