Apple’s bounce: What the analysts are saying 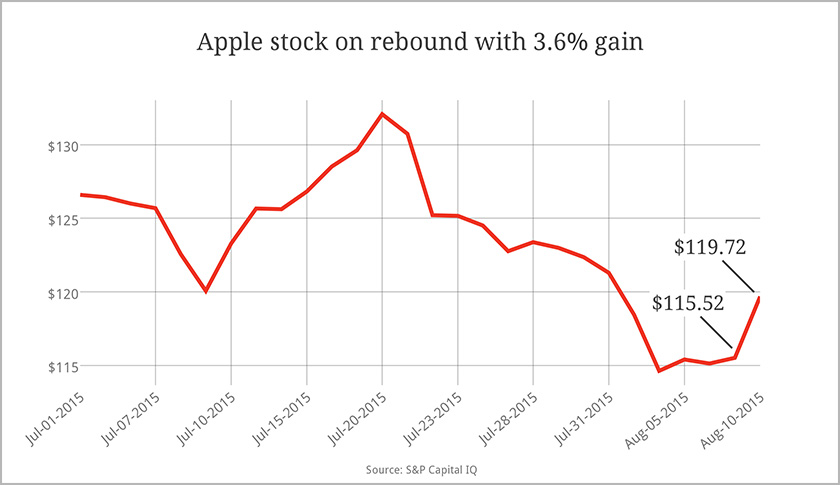 With the bounce came a flurry of positive analyst’s notes.

Excerpts from the ones we’ve seen:

Andrew Uerkwitz, Oppenheimer: In Defense of Apple. “Apple’s share price has declined 12.5% since its recent high of $132, following a consensus-beating F3Q15 and strong outlook into F4Q15. We believe the weakness can be attributed to fear over decelerating iPhone growth, a slowing Chinese economy, and lack of new growth drivers. We believe discounting Apple based on these concerns is unjustified and this note explains in detail why Apple’s growth potential in China, the overall smartphone market, and in other products is under-appreciated. The biggest risk to our bullish thesis, however, is a major shift in tech investor sentiment, from smartphone-centered names to internet-centered names.” Outperform. $155.

William Power, Baird: iPhone Purchase Intent Up YOY and vs. iPhone 5S. “We view our latest iPhone survey as net positive for Apple. The percentage of customers who plan to purchase a smartphone over the next three months is down slightly YOY, but there are two key positives: 1) the percentage of respondents who plan to purchase an iPhone vs. other devices increased 600 bps YOY, and 2) 6S interest is already topping initial 5S interest. Overall, iPhone demand looks strong to us heading into the next iPhone cycle.” Outperform. $155.

Toni Sacconaghi, Bernstein: Five reasons iPhone units might grow next year. “REASON 1: There is still ample share for Apple to gain in the very high end of the smartphone market, particularly from Samsung. REASON 2: Apple executives have stated that the iPhone replacement cycle has remained relatively stable this year, and we believe we could see some acceleration in the smartphone replacement cycle in the U.S. over the next year. REASON 3: Apple continues to attract a healthy number of first-time iPhone purchasers… REASON 4: Income growth in China is a big deal… From 2012 to 2019 under most scenarios, the iPhone should become affordable to about twice as many people in China. REASON 5: Dropping iPhone 6 prices after the 6S launch could create price-elasticity. Outperform. $142.

Aaron Rakers, Stifel: Apple Positive as China Non-Android Smartphones Increased 167% Y/Y and +92% Month-over-Month in July. “Within the data we track, we would note that Android smartphones are estimated to have accounted for approximately 86% of total July 2015 China domestic smartphone shipments, a decline from 92% in June 2015 and 94% in July 2014. This leaves total non-Android (Apple iPhone = majority?) shipments at ~5.5 million in July 2015, up 167% y/y and up 92% from the prior month. Buy. $150.

Jeffrey Kvaal, Nomura: No evidence of a massive drop in orders to suppliers. “Fears of broad order cancellations in Apple’s supply chain driven by soft China demand appear exaggerated to us. Our Taiwan Technology team, led by Anne Lee, notes that some suppliers, such as Catcher, have not seen cancellations over the past month. Bottlenecks may defer demand slightly for some vendors, but stable orders and an on-track 6S launch suggest fears will be short lived.” [Via Barrons]