Is Apple doomed in China, or what? 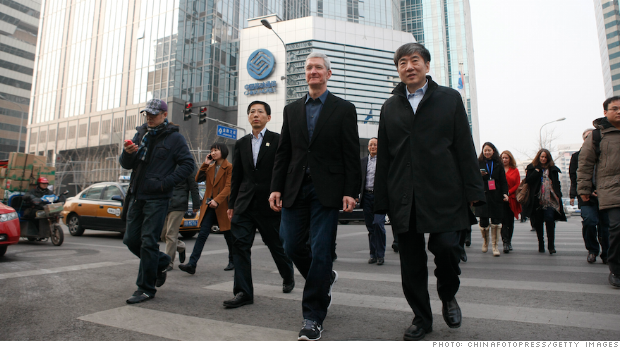 China has been weighing heavily on Apple lately—at least in the minds of the financial press.

Apple’s sales in Greater China (which includes Hong Kong and Taiwan) had been on a tear—up 112% year over year in the latest quarterly report.

But with the iPhone sliding into third place in China, the Shanghai Index falling 26% in six weeks, and December’s tough compare looming, things must look pretty bleak to the algorithms that just pushed Apple’s share price into correction territory.

Apple PR has so far declined to comment on any of this. And why should they? The company’s CEO, and resident China expert, has already said his piece.

Here, for the record, from last quarter’s earnings call, is Tim Cook on China (via Seeking Alpha):

Tim, there’s some concern about what’s going on in China with the stock market and economically. How do you think that plays out for Apple? On one hand you’ve got more stores, broader distribution, the 4G infrastructure is playing out. On the other hand, the economy might be weakening. Is a phone a discretionary purchase or not? How do you think about going forward in China?

Yeah, it’s a very good question, and we remain extremely bullish on China and we’re continuing to invest. Nothing that’s happened has changed our fundamental view that China will be Apple’s largest market at some point in the future. It’s true, as you point out, that the equity markets have recently been volatile. This could create some speed bumps in the near term. But to put it in context, which I think is important, despite that volatility in the Chinese market, they’re still up 90% over the last year, and they’re up 20% year-to-date, and so these kind of numbers are numbers I think all of us would love.

Also, the stock market participation among Chinese households is fairly narrow. And the stock ownership is very concentrated in a few people who put what appears to be a smaller portion of their wealth in the market than we might. And so I think generally this has been, at least as we see it, maybe it’s not true for other businesses, that this worry is probably overstated. And so we’re not changing anything. We have the pedal to the metal on getting to 40 stores mid next year. As we had talked about before, we’re continuing to expand the indirect channel as well.

As you point out, and I think this is a major point that many people miss, the LTE penetration in China is only at 12%. And China doesn’t possess the level of fiber that some other countries do, and so in order to get the great video performance, et cetera, raising that penetration is really great. I think that really plays to an incredible smartphone future there.

Also—and I can’t overstate this—the rise of the middle class there is continuing, and it is transforming China. I saw a recent study from McKinsey that’s projecting the upper middle class to grow from 14% to 54% of households over the ten-year period from 2012 to 2022. So we’re within that period at this moment, and you can see for all of us that travel there so much, with every trip you can see this occurring. And so I think we would be foolish to change our plans. I think China is a fantastic geography with an incredible unprecedented level of opportunity there. And we’re going to be there.

I don’t know how the algorithms parsed this, but Tim Cook doesn’t sound too worried to me.