Can Apple beat the Tough Compare? 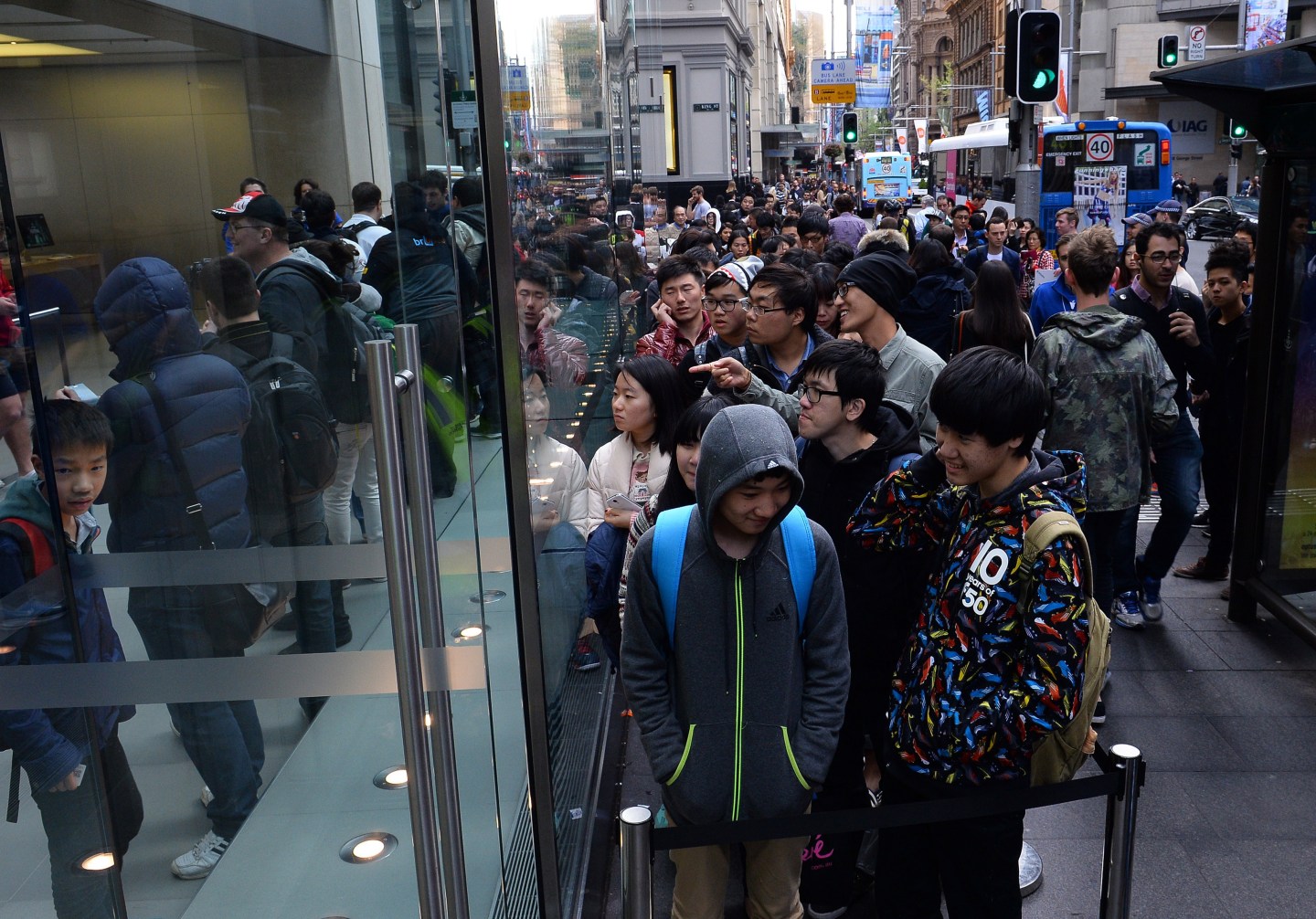 Customers queue outside an Apple store to buy the iPhone 6 in Sydney on September 19, 2014. Hundreds of people queued through the night in Sydney to be among the first in the world to get their hands on the new Apple iPhone 6 models with the large-screen handsets drawing keen interest. AFP PHOTO / Saeed KHAN (Photo credit should read SAEED KHAN/AFP/Getty Images)
Photograph by Saeed Khan — AFP/Getty Images

Is there anybody on Wall Street who doesn’t think that Apple scored a one-time windfall last year when it entered the jumbo smartphone market that had been Samsung’s bread and butter?

The $18 billion dollars in quarterly earnings Apple raked in last December—thanks largely to the sale of a record 74.5 million iPhones—were the biggest in the history of capitalism.

Can the company do it again? Can it sell more iPhones this Christmas quarter? That’s the question behind what Apple analysts are calling the Tough Compare.

In a report issued Tuesday, BCG’s Colin Gillis put it (as is his habit) in the form of a Haiku:

Growth may be harder,
for Apple to find over,
the next fiscal year.

Most sell-side analysts think Apple will beat the Tough Compare. In a Fortune survey of 38 Apple analysts, 36 have 12-month price targets above today’s opening price of $123.08. (Median: $145).

Gillis is one of only two analysts willing to bet that that the stock will be worth less in 12 months than it is today. The other is that perpetual Apple bear, Berenberg’s Adnaan Ahmad. He’s been telling his clients to sell Apple since June 9, 2014.

Below: excerpts from their most recent notes.

Colin Gillis: Prepare for slowing growth. “Apple makes wonderful hardware and has nicely integrated it with a software operating system. Its other software products and services layer can be considered merely adequate, in our opinion. Does anyone really love using iTunes? Do you truly consider the App store a polished product with curated suggestions that can’t be improved? … We are modeling growth on a year-over-year basis to slow starting in the December quarter of 2016. We are not factoring in revenue from new products that are not announced such as TV, but we are factoring in an iPhone and iPad refresh. While we respect that 73% of the installed base has not upgraded to a 6/6+, and this is going to be driver, the yearly comparison becomes increasingly difficult starting in the December quarter. We do not see that Apple has much room left to increase the ASP of the iPhone, increasing its dependence on growth by driving more units through the channel. Finally, the capital return program has completed $126 billion of the $200 billion plan, and share repurchase activity is slowing as the company spends its domestic cash.” Rating: Hold. Price target: $115.

Adnan Ahmad: Kissing Goodbye. “Investors often ask us: “What is going to crack the stock?”… It’s always a tough question to answer and especially so in the past year given the strong performance of the iPhone—the sole business that matters for the stock. While we do not focus on quarterly numbers, these results support our note after Apple’s Q2 results (Over-earning, over-loved and over-and-out?), where we suggested Apple’s iPhone momentum would have to start to slow down… Over the course of the next few days, weeks and months, we think investors are going to start to “kiss goodbye” to the stock and rotate into internet names such as Google, a trade that has probably already started to happen.” Sell. $85.

For the more bullish reports, see Apple’s bizarro earnings report: What the analysts are saying.

Below: My spreadsheet of the analysts’ current 12-month price targets, as accurate and up-to-date as I can make it. Corrections appreciated.