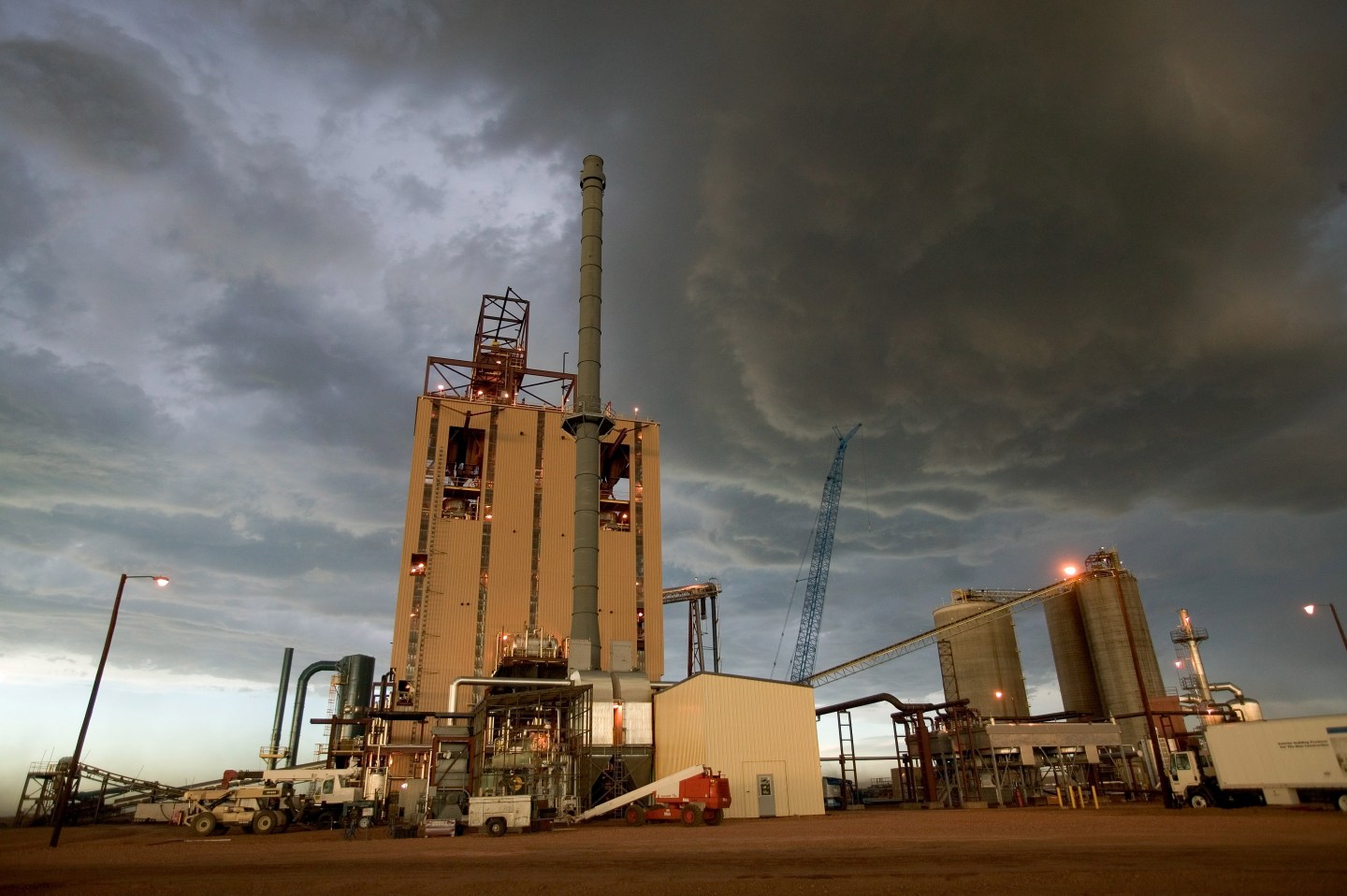 GILLETTE, WY - JUNE 12: (US NEWS AND WORLD REPORT AND NEWSWEEK OUT) Golden evening light bathes the newly built KFx coal thermal upgrading plant that produces the company's K-Fuel June 12, 2006, in Gillette, Wyoming. The $80 million USD northeastern Wyoming project came on line in early 2006 with its first test burn of Powder River Basin coal in March, 2006. K-Fuel is described by KFx as the "unleaded gasoline" equivalent for the coal-fired industry. The company takes low-grade coal, removes 80% of the moisture, increases BTU (heat content) per pound by 30% to 40%, and reduces mercury content by 70% (the element that is credited with fouling water around the world). Sulfur dioxide and nitrogen oxides will also be removed by 30%. The KFx facility, using 8300 BTU coal, will produce annually 750,000 tons of 11,000 BTU coal using the Lurgi Mark 4 process, a modified 50 year-old German engineering procedure (the equivalent eastern Appalachian coal is 11,000 BTU). KFx has an agreement with Kiewit Coal Company to construct a ten unit plant in Gillette and with Arch Coal Company for a twenty unit facility at Coal Creek within 2 1/2 years. (Photo by Robert Nickelsberg/Getty Images)
Photograph by Robert Nickelsberg — Getty Images

After two years of negotiations and controversy, President Barack Obama on Monday afternoon officially revealed a finalized version of a plan to reduce the amount of carbon dioxide emissions that power plants across the U.S. can emit.

In a speech on Monday, Obama called the plan “the single most important step that America has ever taken in the fight against climate change.” Adding urgency to the project, he said “there is such a thing as being too late on climate change.”

While U.S. power plants have limits on other air-born pollutants — like nitrogen and sulfur oxides that cause acid rain — there haven’t been limits, until now, on the levels of carbon dioxide emissions that power plants can emit. Power plants that burn fossil fuels, both coal and natural gas, emit carbon dioxide and in turn these greenhouse gases contribute significantly to the warming of the planet.

The Obama administration has turned to the Environmental Protection Agency to use the Clean Air Act to regulate carbon dioxide emissions from the power industry through the Clean Power Plan. The White House has used the EPA because politically a national carbon emissions reduction plan wouldn’t be able to pass through Congress.

Obama is making it one of his final legacies, before he leaves office, and the plan — and how it fares politically — will shape much of the environmental agenda for the next President. As the Council of Foreign Relations put it: “A fundamental shift in U.S. politics could in principle yield something substantially better – but that isn’t the universe we’re living in.” The New York Times notes that the new plan could make climate change a major talking point in the upcoming presidential election.

Expect the plan to soon get hit with lawsuits and challenges. Critics say the plan will make electricity more expensive and will reduce jobs in industries like coal. In his speech, Obama said “The kinds of criticisms that you’ll hear are excuses for inaction. They aren’t even good business sense.”

This weekend, Obama released details about the plan and set the stage for today’s announcement. But the devil is in the details of how each individual state will choose to cut carbon dioxide emissions from their power plant sectors. The power industry is highly regional, and some states have big solar and wind industries, while others benefit from large natural gas resources, or have long had major coal plants.

The plan enables states to be flexible and choose their own path to reduce carbon emissions from the power sector. Electric power generation from coal and natural gas plants is responsible for 40% of U.S. carbon emissions.

Clearly, the clean power industries — including solar, wind and even smaller sectors like geothermal — will benefit greatly from the plan. States that opt to meet their requirements by investing in clean power projects could be a major boon to these technologies. U.S. solar and wind project developers include SunPower, First Solar, NRG Energy, and SunEdison.

The White House has been gathering business industry supporters to back its Clean Power Plan, given that critics accuse the plan of reducing jobs and being bad for business. Last month over a dozen Fortune 500 companies, like Apple, Google, Walmart and Coca-Cola, signed pledges, organized by the White House, to take measures to curb greenhouse gas emissions and invest in clean energy.

The natural gas industry will also be a major beneficiary of the plan. Power companies that need large amounts of power, but aren’t naturally sunny or windy, will inevitably turn to cleaner burning natural gas plants over coal plants.

The new plan could also provide a major windfall for tech entrepreneurs that have focused on energy. After the boom and bust of cleantech in Silicon Valley over the past few years, energy entrepreneurs have struggled to find customers for energy efficiency and clean energy products.

The coal industry, of course, is one of the major losers in the plan. One of the leading and most economical ways to reduce carbon emissions from coal plants is to simply shut them down, particularly aging plants. At least one fifth of the coal plants in the U.S. have been closed, or are in the process of closing, over the past several years due to their inability to economically meet emissions standards from the EPA.

In December a major climate meeting is being held in Paris, and the U.S. will have a better seat at the table with this new plan. Obama said the plan would enable America to “lead” again on the issue of climate change.

The numbers behind the Clean Power Plan include: