A billion-dollar startup earns its stripes 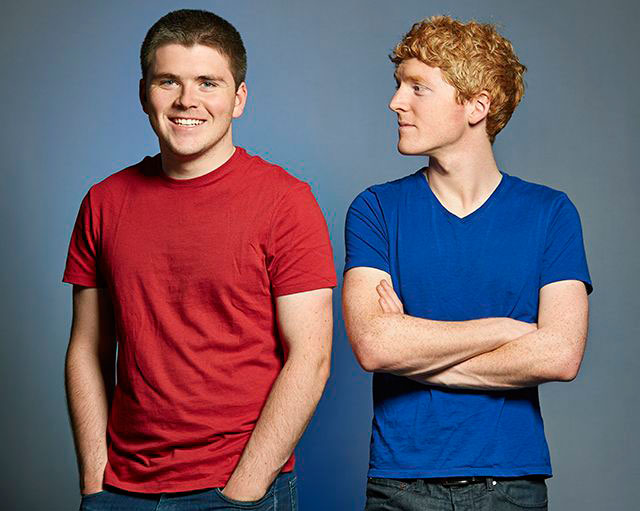 Patrick Collison never answers his phone when the caller ID says it’s an unknown number. The exercise is always a waste of time: a telemarketer, a wrong number, something. But less than a week before Christmas last year, while he was on vacation in his native Ireland, Collison’s phone buzzed, and he felt the unusual urge to tap “answer.”

Hi, Patrick? It was a man’s voice, nasal in tone. This is Michael Lynton. Scrambling from what this magazine recently dubbed the “Hack of the Century,” the CEO of Sony Entertainment (SNE) was in search of a way to distribute The Interview, the controversial film at its center. Lynton needed a payments infrastructure that could be deployed quickly and withstand the wrath of the hackers who had already embarrassed his company. Stunned, Collison was all too pleased to help.

Stripe, the five-year-old startup that Collison co-leads with his younger brother John, was an unusual choice for a Japanese conglomerate in search of stability. The San Francisco company had struck deals with ascendant neighbors like Facebook (FB), Pinterest, and Twitter (TWTR). A Global 500 giant like Sony—let alone one reeling from catastrophe—was a far different endeavor.

But new partnerships with some of the world’s largest companies suggest that Stripe is finally growing into its potential. In the last year the brothers Collison have signed deals with Alibaba (to support Alipay) (BABA), Apple (Apple Pay) (AAPL), and American Express (Amex Express Checkout) (AXP).

“We wanted to do the Alipay deal and the Twitter partnership three years ago, but we weren’t there yet,” Collison says. “Now we are.”

Core to Stripe’s appeal is technology that promises to be simpler and sturdier than the byzantine systems that most online businesses use to process payments. With a few lines of code that take minutes to set up, web and app merchants can accept more than 100 global currencies, including Bitcoin, for a fee of 2.9% plus 30¢ per transaction.

Check out Patrick and John Collison’s interview from Fortune’s Brainstorm Tech below:

The effortless nature of Stripe’s technology helped attract big early investment in the company—Sequoia Capital partner Michael Moritz and former PayPal CEO Peter Thiel are among those who have contributed to the startup’s $200 million war chest—and even bigger expectations. (Discussing payments with Patrick Collison in 2011 “was like when I talked to Mark Zuckerberg about social networking in 2004,” Thiel says.) Today, Stripe counts Facebook’s CEO and Salesforce (CRM) CEO Marc ­Benioff as advisers and is now valued at $5 billion, enough to merit a spot on Fortune’s Unicorn List. The company just announced a new round of funding from Visa, Sequoia, Kleiner Perkins, and American Express.

All are steps toward building what could be the next PayPal—but the biggest hurdle may be the $45 billion company in question. PayPal’s Braintree subsidiary poses stiff competition by winning lucrative contracts with high­flying startups like Uber and Airbnb. Braintree processed nearly $23 billion in 2014; sources close to Stripe say that it is currently processing about the same amount but growing faster. Keith Rabois, a Silicon Valley investor and early PayPal employee who backed Stripe in 2014, says only that Stripe is processing “tens of billions of dollars per year.”

The race is on—especially overseas. This year Stripe plans to expand to Hong Kong, Japan, New Zealand, and Singapore; India and China are further down the road. (Of those, Braintree already operates in Hong Kong, Singapore and New Zealand.) Stripe hopes that its rapid expansion beyond its home market will position it to better compete for business from fast-growing, billion-dollar e-commerce startups like Flipkart and Snapdeal.

And then there’s the matter of fending off acquirers that could stifle ideas and slow the young company’s momentum. Sources close to the companies say PayPal tried to acquire Stripe in 2013; the brothers turned it down. Facebook also tried to buy Stripe in the past two years; sources say the Collisons gave Zuckerberg the same answer. (Stripe declined to comment.)

For now, independent growth suits Patrick and John just fine. “PayPal is a cautionary tale for us,” says the younger Collison. “It was acquired in 2002 and hasn’t done anything innovative since then.”

Update, July 29, 2015: A PayPal spokeswoman denied that the company tried to acquire Stripe.